Cameroon is a country on the West Coast of Africa.  It is bordered by Nigeria to the west; Chad to the northeast; the Central African Republic to the east; and Equatorial Guinea, Gabon, and the Republic of the Congo to the south. Cameroon has relatively modest oil and gas reserves, although it accounts for about half of the country’s exports. Oil production has also been declining in recent years due to maturing of existing fields. Here is a list of operators with plans to drill exploration wells in the near future. Also listed are operators that had plans to drill in the next 2 years, but who have since not made any announcements.  Information has been sourced from Derrick Petroleum's exploration and deals databases.

Exploratory wells planned to be drilled/being drilled in Cameroon in 2011 and 2012. Source: Derrick Petroleum Planned Wells Exploration Database. The number of columns has been minimized to fit the table on the page. The actual database has many more parameters listed and recorded.
1.             Bomono: The Bomono permit is located onshore Cameroon near Mt. Cameroon. It consists of 2 parts, OLHP 1 and 2, covering an area of 2328 sq kms. In February 2009 work commenced on the airborne gravity and magnetic survey. A 500 km 2D seismic survey was obtained by Jan 2011. Bowleven is planning to drill upto two wells on the permit in H1 2012. Bowleven has a 100% interest in the permit. 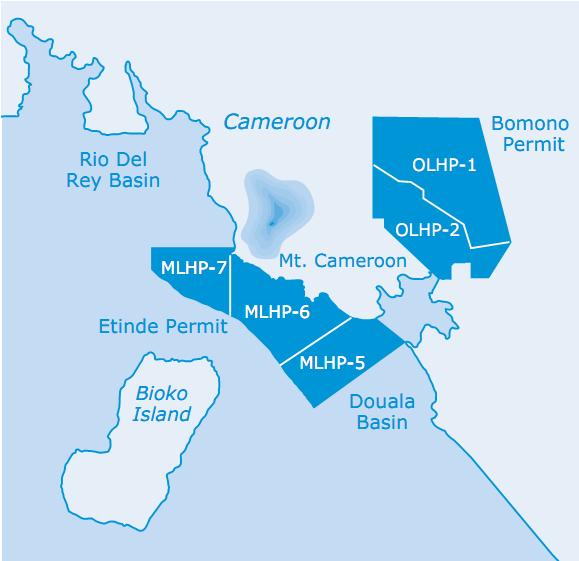 Map of Bowleven’s permits in Cameroon. Source: Bowleven.
2.             MLHP-5, MLHP-6 and MLHP-7: Bowleven operates these three shallow blocks in the Etinde Permit area with a 75% interest. The Blocks are located across the Rio del Rey basin (part of the southern margin of the Niger Delta oilfield basin) and the Douala Basin (which contains large undrilled seismically identified structures), together referred to as the Etinde Permit. The Etinde Permit covers approximately 2,314 km2. The water depths are shallow, from the shoreline up to approximately 70 meters maximum depth.
The Company drilled a high impact exploration well Sapele-1 on MLHP-5 on September 14, 2010. The well was to target a series of stacked reservior objectives, from the proven Miocene fairway down to the deeper Cretaceous fairway. The Sapele-1 well encountered a significant layer of hydrocarbons. Wireline log evaluation indicated all of the five objectives to be hydrocarbon-bearing with net pay confirmed in three, based on fluid samples. Bowleven has a 75% interest while Vitol E&P has 25% interest.
3.             Kombe-N’sepe: Kombe-N’sepe Block has an area of 3026 sq kms. The Kombe-N’sepe Block is located at the northern end of the late Cretaceous turbidite play fairway that extends from northern Gabon through Equatorial Guinea into southern Cameroon. More than two billion barrels of oil have been discovered in the region. Operators have made several small oil and gas discoveries in and around the Kombe-N’sepe Block. A two-well exploration campaign was planned to begin in either 2009 or early 2010. However, pending further announcements by the consortium, it is unlikely that an exploration well will be drilled in 2011. Perenco (40%) operates the block and the partners are Kosmos Energy (35%) and Société Nationale des Hydrocarbures (25%) 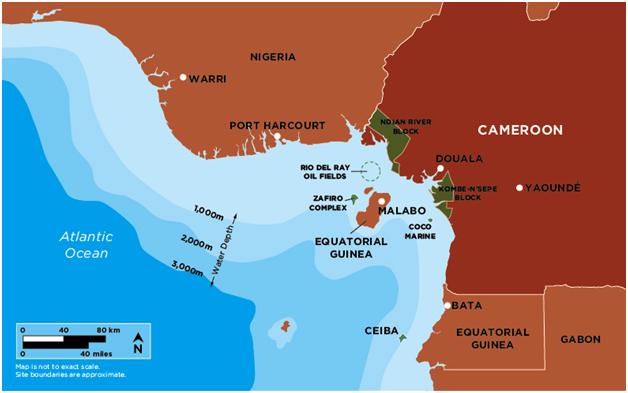 Source: Kosmos Energy
4.             Ndian River: Ndian River Block is located in Coastal strip of Rio del Rey Basin bordering Gulf of Guinea and abutting Cameroon/Nigeria border (predominantly onshore). Société Nationale des Hydrocarbures will be carried through exploration and appraisal phases and has an option to back in to the project with an interest of up to 15% upon approval of a development plan. Kosmos initially is focusing on the Ndian River Block’s under-explored northern extension of the late Cretaceous/lower Tertiary turbidite play. Since 2007 exploration activities have included a gravimetric and magnetic survey of the block, field studies, reprocessing of existing data and a 2D survey over an area with the highest potential. It is unlikely a well will be drilled in 2011, as the partners are not talking about it so far.
5.             Tilapia: Tilapia block is located in the Douala/Kribi-Campo basin offshore Cameroon and covers a total area of 3,874.9 sq km. A 3D seismic survey was acquired in 2010 and an exploration drilling program was to commence in 2011. However, pending further company announcements, it is likely that exploratory drilling will only occur in 2012. Noble Energy (50% interest) is the operator along with partner Petronas (50% interest). 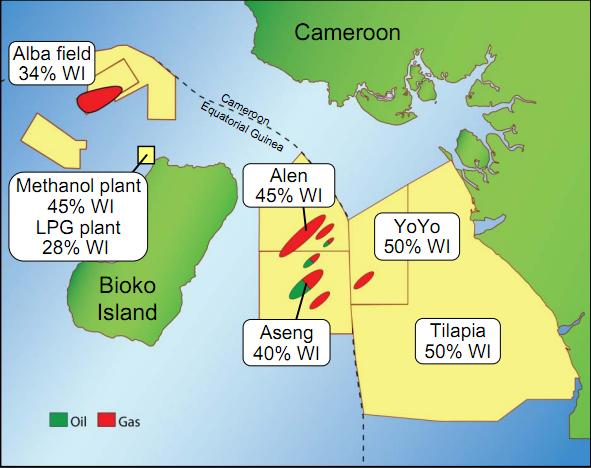 For more presentations on "Cameroon", use our oil and gas document library:

Powered by Derrick Petroleum Services
Posted by Sanjay Samuel at 6:13 PM No comments: Links to this post