BP changes gears from survival to growth!! BP and Reliance in $7.2 billion alliance...

After tying up with Rosneft in Jan 2011, BP is acquiring a 30% stake in 23 oil and gas blocks that Reliance operates in India, including the producing KG D6 block and forming a 50:50 joint venture between the two companies for the sourcing and marketing of gas in India. The joint venture will also endeavour to accelerate the creation of infrastructure for receiving, transporting and marketing of natural gas in India. This will make the partnership India’s largest private sector holder of exploration acreage.
BP will pay Reliance an aggregate consideration of US$7.2 billion, and completion adjustments, for the interests to be acquired in the 23 blocks (~270,000 sq km). Future performance payments of up to US$1.8 billion could be paid based on exploration success that results in development of commercial discoveries. These payments and combined investment could amount to US$20 billion. 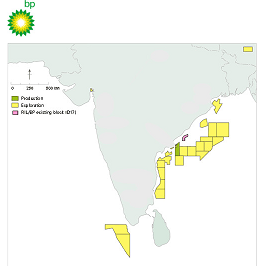 Reliance will continue to be the operator under the production sharing contracts, whose blocks lie in water depths ranging from 400 to over 3,000 metres. These currently produce about 1.8 bcf/d, over 30% of India’s total consumption, and over 40% of India’s total production.
BP has been working with Reliance since December 2008 on the D-17 deepwater block in the KG basin on the east coast of India. BP, with a 50% interest, operates the block and Reliance holds the remaining interest. However, Oil Secretary S Sundareshan said that the deal will require the government's approval as New Exploration and Licensing Policy blocks are involved.
ONGC says Jai ho!
Commenting on the deal former chairman of ONGC RS Sharma said, “This is positive news for the entire E&P sector for India. The deal covers the entire value chain - upstream and downstream." Referring to the Cairn-Vedanta deal that has failed to take off, Sharma said "the sentiments have been negatively impacted because of one deal...this deal shows confidence in the Indian oil sector."
What are the financing options of BP?
BP's recent deal with Rosneft did not involve any cash payment which is in line with BP's need to raise cash after the Macondo oil spill. This current Indian alliance involves upfront payment of $7.2 billion. How is BP planning to make the payment??
Posted by Anitha Bharathi at 7:14 PM 6 comments: Links to this post

Oil and Gas - Mergers and Acquisition Review: Nexen plans to follow in Encana's footsteps in fin...

Oil and Gas - Mergers and Acquisition Review: Nexen plans to follow in Encana's footsteps in fin...: "Nexen Inc has initiated a process to seek a joint venture partner for various portions of the company’s northeast British Colum..."
Posted by Rupesh Govindan at 6:00 PM No comments: Links to this post

Drilling activities onshore and offshore Trinidad & Tobago is said to increase this year as players from the oil and industry plan to spud more than 25 wells in 2011, up from five wells in 2010 and just seven wells in 2009.
Here‘s what is on the menu….
Petrotrin 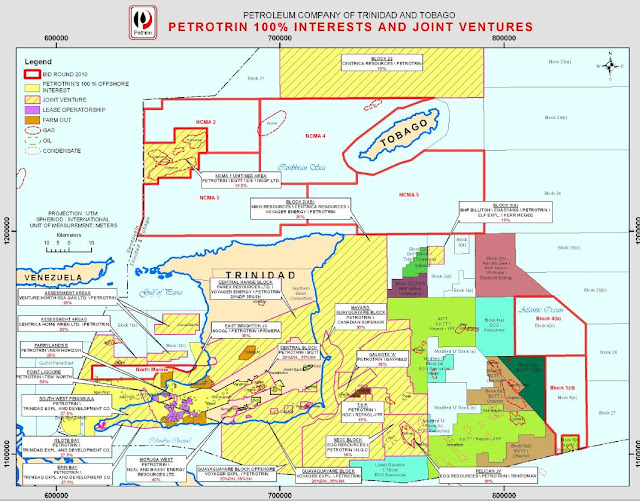 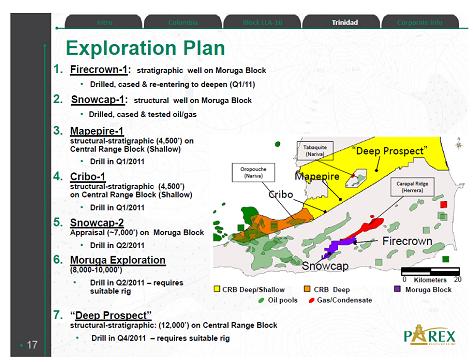 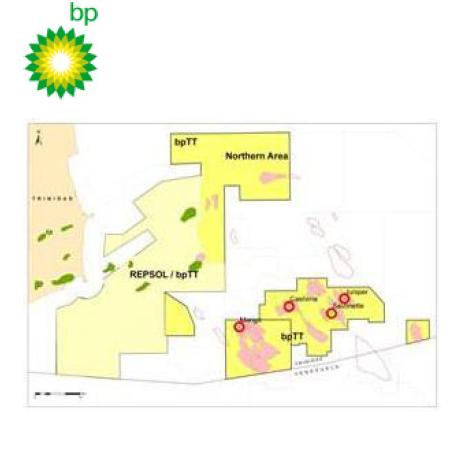 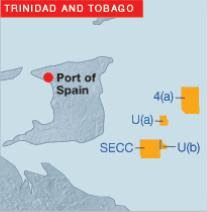 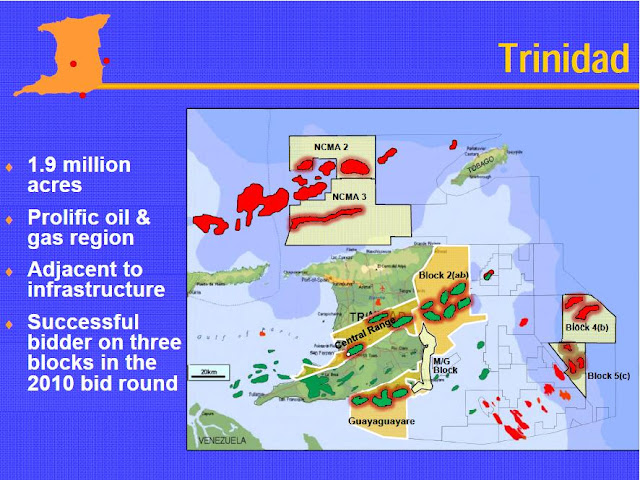 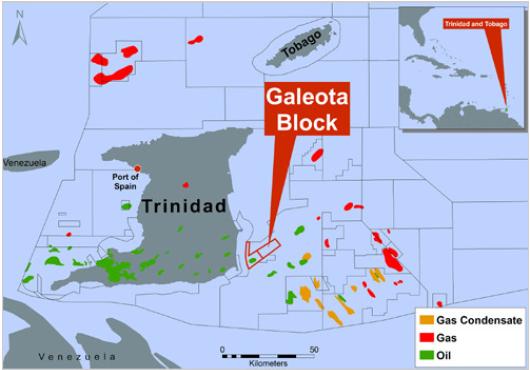 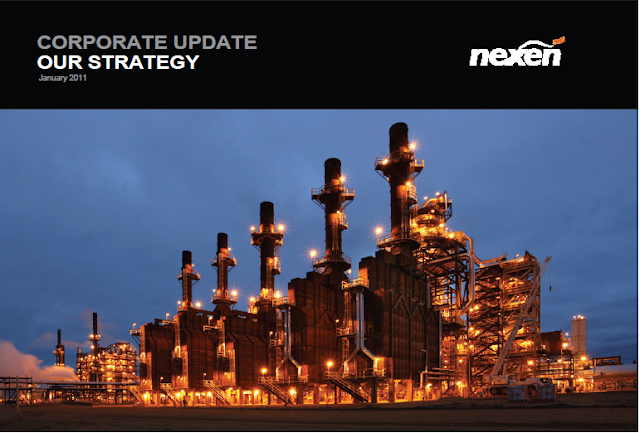 Nexen Inc has initiated a process to seek a joint venture partner for various portions of the company’s northeast British Columbia shale gas acreage. The company has engaged Bank of America Merrill Lynch as its exclusive advisor on this sale process. 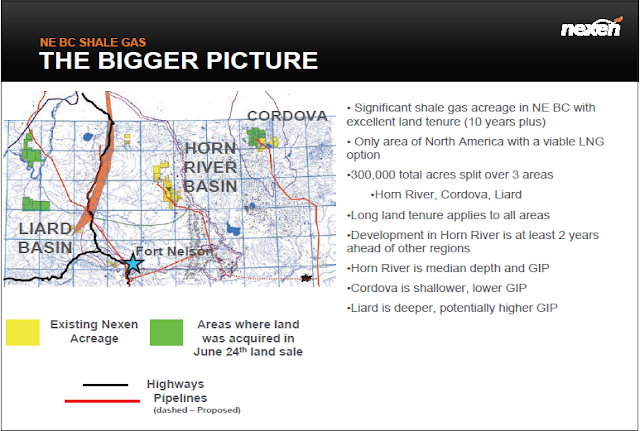 Northeast BC shale gas:
-- 300,000 acres (100% working interest) split over three areas of Horn River, Cordova and Liard
-- Horn River is median depth and GIP; Cordova is shallower, lower GIP; Liard is deeper, potentially higher GIP
-- Delivered drilling, fracing and completions program at industry-leading pace with a 100% success rate
-- Successfully drilled and brought on-stream of eight-well pad and commenced drilling another nine-well pad late in the year; New industry record of 3.5 fracs/day on our 8-well pad
-- 8-well pad program adding 50 MMcf/d in early 2011
-- ~4 to 15 Tcf of contingent resource in the Horn River and Cordova basins and 5 to 23 Tcf of prospective resource in the Liard basin
-- The company is also progressing plans to drill an 18-well pad in the second half of 2011. First shale gas production from the nine-well pad is expected in Q4-2011, while production from the 18-well pad would be in late 2012.

Posted by Rupesh Govindan at 2:10 PM No comments: Links to this post

Implied reserves value recovered in 2010, stronger for oil than for gas

On a worldwide basis, the implied reserves values, $/2P reserves (entitlement), recovered largely by the end of 2009 and stayed at similar levels throughout 2010, but still below the high levels of 2007-2008.

Implied reserves by country and by hydrocarbon type is readily available for US and Canada whereas the rest of the world gives limited data sets for statistical analysis. 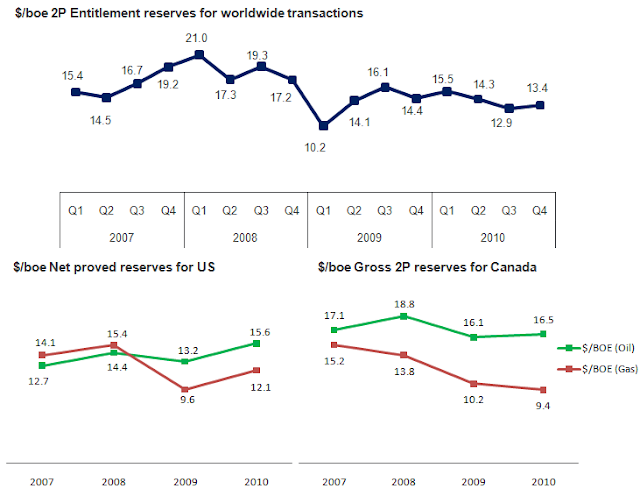 For the US, implied proved oil reserves values appear robust with 2010 full year average $15.6/boe for proved reserves, whereas gas reserves values are still below 2007 and 2008 levels albeit up from 2009 levels.

For Canada, the separation of implied reserves values for gas and oil widened further in 2010, following the last years’ trend. For the full year, the average price of oil deals was $16.5/boe for 2P reserves and of gas reserves was $9.4/boe. 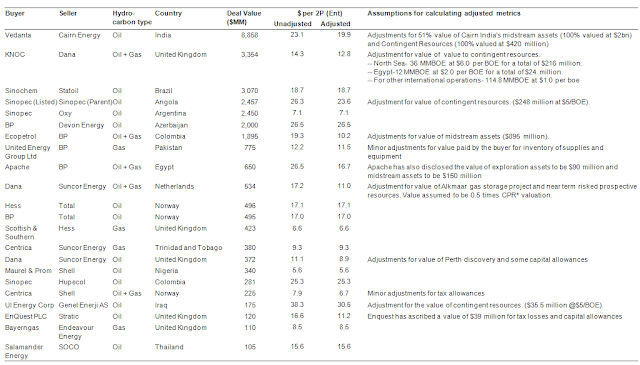 Posted by Rupesh Govindan at 10:30 AM No comments: Links to this post