Cenovus Energy Inc. is planning to accelerate development of its oil sands and conventional oil properties, targeting output of half a million barrels per day within 10 years. The company has approved a 2011 strategic plan that builds upon its original strategy created in 2010 and establishes new timeline and significant oil production increases for the next decade.
The plan targets:
- Total oil production of about 500,000 bpd net by the end of 2021
- Oil sands production of more than 400,000 bpd net by the end of 2021, about six times greater than current oil sands production
- Conventional oil production of 120,000 bpd to 130,000 bpd by the end of 2016, nearly double current production of about 70,000 bpd
- A new oil sands project phase expected on stream every 12 to 18 months
- An increase in total production capacity at Foster Creek to between 270,000 and 290,000 bpd gross, through increased production capacity at phases F, G and H and future phases
- Drilling about 450 stratigraphic (strat) wells per year for the next five years to prepare for the development of oil sands opportunities
- Doubling of net asset value in the 2010 to 2015 timeframe
"We now have five phases at Foster Creek and three at Christina Lake operating with design capacity of 178,000 barrels per day. We have regulatory approval in place for projects under construction to get to about 440,000 barrels per day of operating capacity on a gross basis" said Brian Ferguson, Cenovus CEO

Mauritania, Benin and Togo: Overview of Oil and Gas Discoveries and Exploration in 2011

Mauritania, Togo and Benin are countries in West Africa that are generating a lot of interest due to some significant discoveries in adjacent regions. This article provides an overview of exploration activity in these countries and the main active players looking to explore in 2011 and beyond.

The following table lists the companies with plans to drill or conduct exploratory studies leading to drilling in this region.

Derrick Planned Exploration Wells Database. The number of columns has been minimized to fit the table on the page. The actual database has many more parameters listed and recorded.

For more information of discoveries and exploration plans for the following West African countries, click on the following links. Cote D’ivoire; Ghana discoveries; Ghana Exploration in 2011; Angola; Sierra Leone; Sengal; List of West African discoveries in 2010 – 2011; Liberia
Mauritania
Discoveries
The Chinguetti oilfield is located off the Mauritanian coast in 800m of water. It was discovered by the Australian firm Woodside Petroleum in 2001. It is named after the city of Chinguetti. Oil production began in February 2006 from the Chinguetti oilfield, which is located in the Atlantic Ocean 56 miles southwest of Nauakchott.  According to the Energy Information Agency (EIA), a division of the US Energy Department, oil output began at 30,620 barrels per day (bpd). Production quickly climbed to 75,000 bpd by late 2006.  However, in 2007, output  declined dramatically because of “geological complexities” and by the spring of 2008, production was just 11,500 bpd.  Field production declined from 8,600 b/d in January 2009 to 7,400 b/d in December last year. Given the decline in production, the partners in the field are mulling shutting down operations there. Domestic consumption of oil is 21,000 bpd. In addition to Chinguetti field, Mauritania has several other offshore oil and natural gas fields that are being developed.  Proven oil reserves are estimated at 100 mn barrels, which is 21.4 years of production at the 2008 extraction rate. 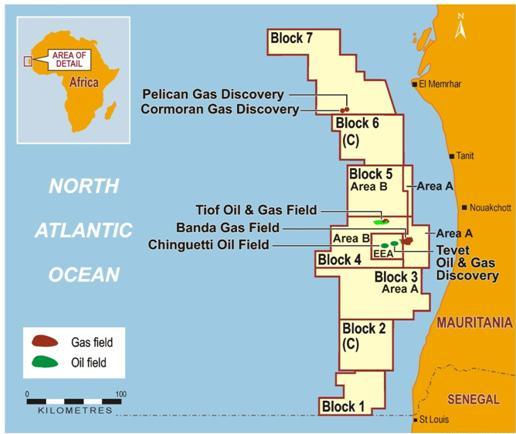 Map of Blocks in Mauritania. Source: Roc Oil
The Pelican-1 exploration well located in the southern part of Block 7 was drilled in over 5,500 feet of water to a total depth of approximately 12,500 feet. The well discovered a significant hydrocarbon bearing sequence spanning over 1,000 feet in height.
The Banda field was discovered in 2002. The Banda Field is in approximately 300 metres of water and spans PSC Area A and PSC Area B. The Banda Field is estimated to contain upto 3 – 5 tcf of natural gas. In 2008, two successful appraisal wells were drilled on the Banda discovery; Banda North West and Banda East. The same oil and gas contact was encountered at all three wells in the Banda field. During 2009 the seismic and well data was incorporated into the geological model to determine the commercial potential of the field and this work is ongoing.
The Tiof discovery is located approximately 90 kilometres west of Nouakchott, the Mauritanian capital, and 25 kilometres north of the Chinguetti Field. The Tiof field is estimated to hold 350 million barrels of oil. It was discovered in 2003. The discovery of the 1.5 trillion cubic feet Pelican field on Block 7 by British firm Dana Petroleum added to the excitement.
The Tevet Field was discovered in 2005 by the operator Woodside Petroleum, and is believed to contain between 50 million and 100 million barrels of oil and may be tied into the Chinguetti development.
The Cormoran-1 exploration well, located in offshore Block 7, completed drilling in January 2011. It lies ~ 2km to the south of the Pelican-1 gas discovery well, which was drilled in late 2003. The objective of the well was to appraise the Pelican gas discovery and to target two underlying exploration prospects, Cormoran and Petronia. The well successfully intersected gas in both Pelican and Cormoran. The Pelican interval was flow tested at a stabilised flow rate of approximately 23 mscfd. In the deeper Petronia target, the well encountered rich gas in Turonian-age reservoirs. However, drilling had to be stopped for operational reasons soon after penetrating the trap. Dana Petroleum (36%) is the operator of the block and the other partners are Woodside (15%), Gaz de France (27.85%), Tullow (16.2%) and Roc Oil (4.95%).
Exploration in 2011
The TA7 and TA8 permits are located onshore in central Mauritania. A well was drilled in TA8 in 2009 which failed to encounter hydrocarbons. A 1000 sq km of 2D seismic acquisition over TA7 commenced in early 2011. Total (60%) is the operator of the permits along with partners Sonatrach (20%) and Qatar Petroleum (20%).
Apart from the Cormoran-1 exploration well mentioned above, the result from the Gharabi-1 well in Block 6 was announced in February 2011. The well, which was selected by the operator to meet licence commitments, intersected poorly developed water-bearing reservoirs. In 2011, the partners plan to continue defining prospects throughout the Mauritania-Senegal basin with further planned exploration activity in 2011 and 2012. Petronas (72.60%) is the operator of Block 6 along with partners Tullow (22.4%) and Roc Oil (5%). The Sidewinder prospect in this block is due to be drilled in the second half of 2011.
The highest profile investor has been Petronas, which bought a 47.4% stake in the Chinguetti project from Woodside. It is part of a $418m package that also gives the Malaysian firm the role of operator on the Banda, Banda Tevet and Tiof fields.
There is certainly plenty of scope for further discoveries offshore Mauritania, particularly given the short history of hydrocarbon exploration in the country. The eight blocks, over which exploration can happen, cover most of the country's offshore acreage and are huge in comparison with the concessions carved out in Nigeria and elsewhere in the Gulf of Guinea.
Togo

Togo is a country lying between Ghana and Benin. Recent high profile successes in neighbouring Ghana have transformed the exploratory potential of its offshore acreage. ENI acquired Blocks 1 & 2 and has a 100% interest. The blocks are located in the Dahomey Basin, offshore Togo. The blocks are scarcely explored and are bordered to the west by the analogous Tano basin where major discoveries have been made previously. ENI plans to commence an aggressive exploration program in 2011 which could culminate with the drilling of a well in 2012. ENI announced on March 10, 2011, in its 2011-2014 Strategic Plan that it will spend about €53.3 billion for ­upstream ­activities to increase global oil and gas and to start new projects in promising exploration prospects in countries such as Togo, Ghana, Democratic Republic of Congo and Mozambique. 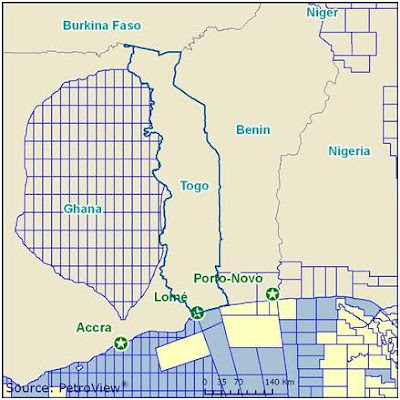 Benin
The Republic of Benin is situated to the west of Nigeria. The offshore basin includes the Seme north and Seme south fields (80 mmboe) discovered in 1975, and the Hihon-1 and Fifa-1 discoveries (drilled by Kerr McGee which was later acquired by Anadarko). Onshore, a tar belt in the coastal region has been sourced from a Lower Cretaceous lacustrine kitchen located offshore. These hydrocarbons prove the existence of working petroleum systems in the region and there appears to be considerable remaining exploration potential in the offshore area.
Anadarko drilled the Sota 1 wildcat in 1,924m of water on Block 4 during the summer of 2007 which was dry. 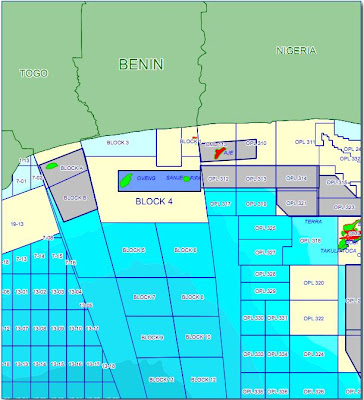 Figure of blocks in Benin. Source TGS
Petrobras recently entered Benin by acquiring a 50% interest in Block 4 which covers a huge area of 7400 sq km. The block lies at a water depth that varies from 200 to 3,000 m, and is about 60 Km from the coast. The block is located in the Gulf of Guinea’s Dahomey Basin. Lusitania Petroleum holds the remaining 50% and is operator although Petrobras has the option to assume operatorship. The company has made a commitment to collect and process 2,250 sq km of 3D seismic data by the end of 2011 and once the exploratory potential of the area is confirmed, the consortium will commence operations, initially drilling 3 wells.
Posted by Sanjay Samuel at 6:26 PM 1 comment:

According to the Phillips Resources website, the company has been in Western Pennsylvania for 35 years and has operated or participated in the drilling of more than 50 Marcellus Shale wells. It has approximately 250,000 net acres of land holdings. 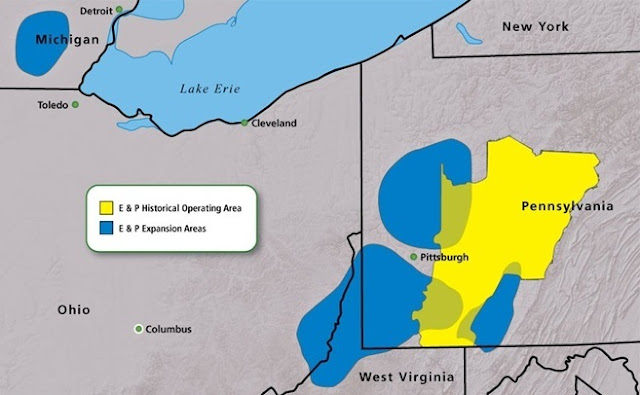 Exxon’s recent activities in UNCONVENTIONAL SHALES
This Marcellus acquisition by Exxon Mobil has moved the company into the top five leaseholders in the natural gas play with more than 700,000 acres to explore. Exxon has shelled out billions to build up its exposure in unconventional resources. Here are the few examples..
In Q2-2010, Exxon paid $34.9 billion for XTO Energy, making it the biggest US gas producer. In Q3-2010, Exxon paid around $700 million to buy Ellora Energy, picking up that company's position in the Haynesville shale in Louisiana and Texas.
At a shareholders meeting last month, Exxon's Chief Executive Rex Tillerson said his company was "positioned to double our US unconventional production over the next decade with an inventory of approximately 50,000 drillable well locations."
A quick glance at the acreage metrics in Marcellus Shale
Exxon is believed to have paid $4,280/acre, after accounting $333 million for the reserves (based on $40,000/producing barrel or ~$9/proved boe). The price paid by Exxon is at a 50% discount when compared to the 2010 average metrics of $8,000/acre.
The following table shows few deals where high $/Acre was paid.