Asset portfolio of UNX in Namibia
The asset base of UNX consists of approximately 51,000 sq km (approximately 32,000 net) of offshore acreage, strategically located along the prolific South Atlantic Margin, offshore Namibia. Of the four hydrocarbon basins that have been identified offshore Namibia, the Orange Basin provides the greatest exploration potential. UNX’s land holdings in the Orange Basin include 90% working interest in Blocks 2713A, 2713B, 2815, 2816, 2915; and 40% working interest in Blocks 2813A, 2814B and 2914A. 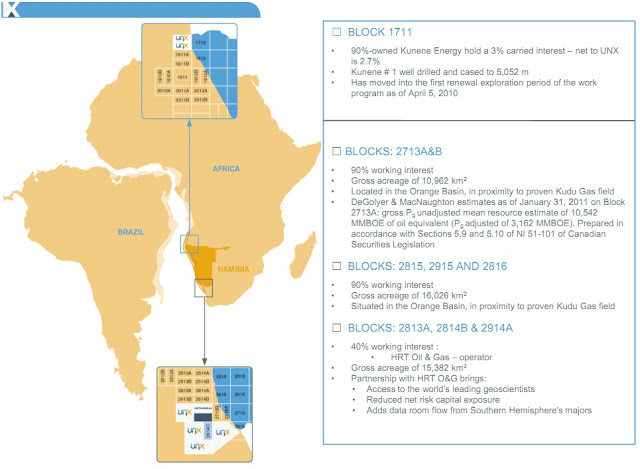 UNX’s PEL 2713 has gross unrisked recoverable prospective resources of 10.5 billion barrels of oil equivalent and gross risked recoverable prospective resources of 3.2 billion barrels of oil equivalent. The resources are comprised of approximately 72% oil, 6% condensate, 3% associated gas and 19% non-associated gas.
West Africa Vs Brazil
Through the deal, HRT wants to expand its exploration and production areas in West Africa, where it sees potential for similar deposits to Brazil's vast, new offshore oil fields. All the wells drilled offshore Namibia had oil shows, confirmed by biomarker and diamondoid studies. The analysis further confirms the identical age and rock type of Brazil.
Recently, the Brazilian giant Petrobras also acquired a stake in Benin block and the company’s geologists disclosed that West Africa holds similarities to Brazil's pre-salt discoveries. Are these West African countries lining up to compete with the Brazilian pre-salt resources? 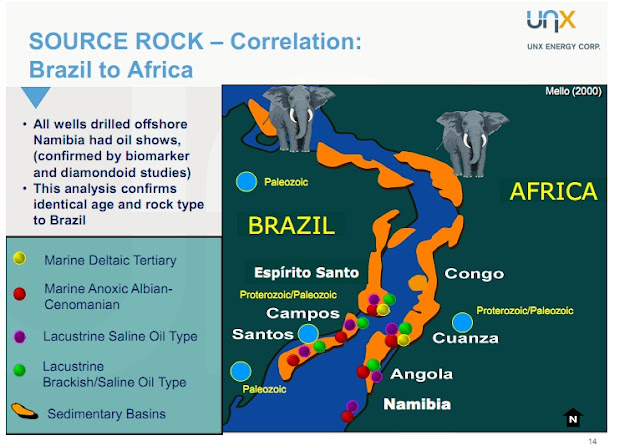 In addition to this deal, HRT is planning to sell up to 50% of a pair of oil blocks in Namibia’s Walvis Basin.
Click here to see the publications of the companies operating in Namibia: http://docsearch.derrickpetroleum.com/research/q/namibia.html
Posted by Anitha Bharathi at 12:35 PM 1 comment: Links to this post