In the largest M&A deal till date in 2011, Australian Mining major BHP Billiton (BHP) and Houston based Oil and Natural gas explorer Petrohawk Energy Corp (HK) have entered into a definitive agreement for BHP to acquire HK. The offer price of $38.75 per share of Petrohawk, represents a total equity value of approximately $12.1 billion and a total net debt of $3 billion (Petrohawk's debt stood at $3.8 billion as of June 30, 2011 and has been adjusted for certain midstream asset sale proceeds of $800 million),
BHP has engaged Barclays Capital and Scotia Waterous while Petrohawk has engaged Goldman Sachs as their respective financial advisors in connection with this $ 15.1 Billion transaction. This is the largest oil and gas deal since the acquisition of XTO Energy by ExxonMobil for $41 billion in 2009.
All cash offer at a substantial premium 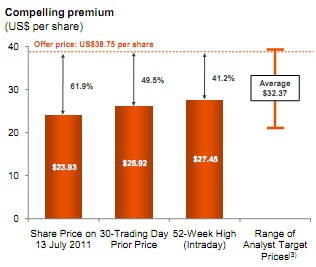 Source: BHP Billiton
BHP has made an all cash offer that is hard to    refuse. The offer is at the upper end of target prices given by 27 brokers and is at a substantial premium to not only 30 day trailing price but also to its 52 week high trading prices.
Not surprisingly, Petrohawk shares surged 63% on the announcement of this deal.
For Petrohawk, an opportunity rich and capital starved company, this is a timely opportunity to unlock the value of its portfolio. BHP is taking no chances with the offer price. It is probably offering at the top end of what it believes is the value of these assets in order to close the deal very quickly. The offer will commence on 25-July-2011 and the deal is expected to close in Q3 2011.
BHP gets a focused position in Haynesville shale, Eagle Ford shale and Permian basin
Petrohawk has a concentrated portfolio of high quality assets in Haynesville and Lower Bossier shale, Eagle Ford shale and Permian basin. The company has approximately 1,000,000 net acres in Texas and Louisiana; estimated 2011 net production of approximately 950 MMcfe/d (90% gas); year-end 2010 reported proved reserves of 3.4 Tcfe (92% gas and 78% located in Haynesville play); current non-proved resources base of 32 Tcfe for a total risked resource base of 35 Tcfe.
Petrohawk resource base 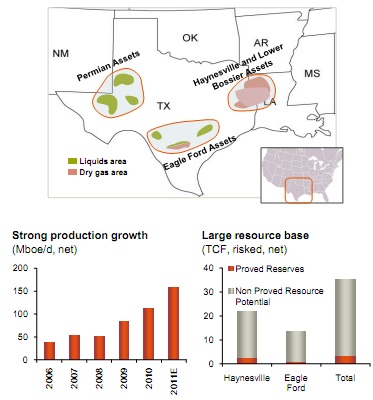 Eagle Ford Shale assets:
-- Counties: La Salle, McMullen, Karnes, DeWitt and Zavala counties;
-- Approximately 332,000 net risked acres;
-- As of December 31, 2010, the proved reserves for the region were approximately 736 Bcfe (22.6% proved developed);
-- Estimated 2011 net production of approximately 210 MMcfe/d;
-- Risked resource base of approximately 13.5 Tcfe;
-- Petrohawk has a joint venture in Eagle Ford Shale midstream with Kinder Morgan holding 25% interest and Petrohawk holding the remaining 75% operated interest. The assets include 280 miles gas gathering plus 112 miles of condensate gathering, which is expected to be in service by year end 2011.

Permian basin assets:
-- Estimated 325,000 net acres which Petrohawk acquired in May 2011 for $455 million;
-- 70% of the acquired acreage is located in Delaware basin while 30% of the acreage is split between Northern and Southern Midland basin. 90% of the total acquired acreage is operated and is primarily located in Loving, Reeves and Culberson counties.
Petrohawk’s current production and proved reserves are 90% and 92% gas respectively, but the liquids share is expected to rise over the next two years. BHP has announced its intention to increase capex beyond what Petrohawk had planned. That increase will most likely be focused on liquids production. 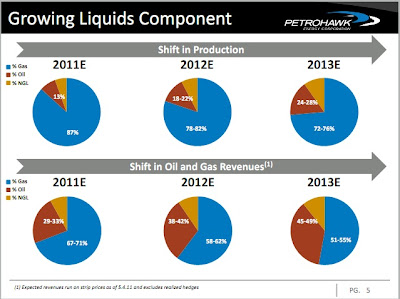 Source: Petrohawk Energy Corp
This acquisition will result in a 30% increase in BHP’s proved reserves, and together with the Fayetteville acquisition earlier this year increase the resource base by 300%. BHP plans increase production at 10% CAGR to reach one million barrel per day in by FY15. 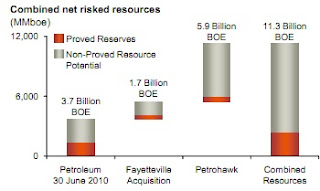 
Price premium is justified based on relative valuation of the assets based on acreage in the same or adjacent areas ….
We have estimated the deal value break up as follows:
(#Source: DPS estimates)
…. Since it offers a compelling strategic benefit for BHP
BHP management has highlighted strategic benefits from this deal as follows:
Ironically, limited impact on broader market

Immediately after the deal announcement, speculation started on other likely takeovers. But we believe nothing has changed in the market to specifically fuel more deal making. Is there any pressure on any peer group to do a deal? No, BHP is one of its kind. Does Petrohawk being taken out create a shortage of assets that will make buyers scurry to do a deal? No, there are plenty of assets on the market. According to DPS study of Deals in Play, more than $90 billion worth of oil and gas assets are on the market as of July 2011. This volume of supply is the same as what existed at the beginning of 2011 and approximately double the volume of supply in early 2010.
As BHP plans to increase Petrohawk’s capital spend, this deal will result in higher US gas production. This in turn will exert a further downward pressure on gas prices.
Analyst comments
Analysts who see this as a Value buy
-- Peter Chilton, Constellation Capital Management portfolio manager, says "Their view on their first shale buy was they were buying at bottom-of-the-cycle prices…I guess they see value here."
-- Grant Sporre, Rob Clifford and Gaetan De Buyer, Deutsche Bank AG analysts say “BHP has valued this asset for growth….BHP is increasingly confident on the future of gas and shale in particular as they continue their broadened push into the shale gas sector.”
-- Jason Gammel, an analyst at Macquarie says “Petrohawk has an outstanding asset base, but monetary and capital problems have held back its true value."
Analysts who see this acquisition In Line
-- Tudor Pickering Holt & Co gave a net asset value of $38.30 to Petrohawk which is much closer to the $38.75 per share price offered by BHP. TPH said “We’ve never questioned Petrohawk’s asset quality with blocky, core shale assets in the Eagle Ford, Haynesville, and emerging Permian basin.... BHP’s deep pockets and Petrohawk’s deep experience in the shales are a perfect fit.”
-- According to Robert Morris from Citigroup Global Markets, the comparisons are a mixed bag when we look at the per-acre cost in the different shales. Citigroup estimates the cost to BHP for undrilled Haynesville acreage to be about $5,000 per acre. Robert Morris, Citigroup Global Markets analyst, says“… which matches what BHP paid for Chesapeake’s Fayetteville stake earlier this year.” For Petrohawk’s Permian basin acreage, Citigroup estimated the cost to BHP was about $6,200 per acre. Robert comments “… which appears quite aggressive given that Petrohawk’s average cost basis is $1.4k/acre.” And for the Eagle Ford acreage, Citigroup estimated the price to be $22,000 per acre, “… which is arguably the high-end of any public transaction to date” according to Robert.
Analysts who consider this deal Overvalued
-- Glyn Lawcock, head of Australian Resources, says "At the current gas price, it doesn't make sense…If the current (U.S.) gas price of low $4 per mmBtu were to hold, then they've paid a big price for something that's not going to generate the returns that they are thinking….You've really got to believe that the U.S. gas price will (climb) back up to a minimum of $6 per mmBtu."
-- Cameron Peacock, a market analyst at IG Markets Ltd, says “the premium is probably a little bit more than expected…paying in advance for future growth is something the analysts often don’t like to see.”
Other comments
-- Charles Kernot, an analyst at Evo Securities says “BHP Billiton would pay around $27 per boe (barrel of oil equivalent) for the proved reserves, which is relatively expensive. However, this ignores the sizeable potential of the non-proved resources which are probably viewed as low risk exploration and therefore easier to convert to proved reserves.”
--  Claudia Mahn, North America energy analyst at IHS  says “While this will help the US getting resources out of the ground in the short- to medium-term, these deals could potentially weigh on the country’s energy security down the road, if foreign companies would gain control over significant volumes of unconventional oil and gas production in the US.”


Context - BHP deals history
BHP has done two quick deals in succession in US shales – the current deal and the February 2011 deal to acquire Chesapeake’s Fayetteville assets for $4.75 billion. However, these two deals came after a very long lull, the last significant oil and gas deal by BHP before these two was in late 2006 when Anadarko sold its Genghis Khan discovery in deepwater GOM to BHP, Hess and Repsol for $1.326 billion.
In this interim period, BHP had unsuccessfully attempted two large acquisitions, Rio Tinto and Canadian Potash Corp, to further build a dominant position in mining. In spite of BHP reiterating its commitment to oil and gas, the market continued to speculate about a potential divestiture of BHP Petroleum. With the two deals in US shales, that issue has been laid to rest.
Context - Petrohawk deals history
M&A deals by Petrohawk since 2008
Context - Corporate acquisitions in US shales
Foot Notes:

! Based on MAY-2011 Petrohawk's Permian Basin acquisition
*as estimated by the buyer
(1) Haynesville comparable deals
Based on JUL-2010 Exxon-Ellora transaction in Haynesville, the $/Acre is assumed to be $10,500/Acre.
Out of all recent significant Haynesville deals, the Ellora acreage was the only one in close proximity to the Petrohawk acreage.

The other high value deals in Haynesville involving undeveloped acreage were, Exco/BG acquiring assets from Southwestern Energy and Common Resources, in two separate transactions. The acreage in these two transactions were mainly in Texas, whereas Petrohawk’s majority Haynesville acreage lies in large part in Louisiana.
(2) Eagle Ford comparable deals
Hawkville
The value is derived from JUN-2011 Statoil/Talisman-SM Energy adjusted deal metric of $14,610/Acre and discounted for the higher share of dry gas acreage in Petrohawk's portfolio. Other comparable deals (but slightly more distant from Petrohawk’s acreage) are KNOC-Anadarko at adjusted price of $13,975/Acre and Mitsui-SM Energy at $11,035/Acre
Black Hawk
Based on JUN-2011 Marathon-KKR/Hilcorp deal, the $/Acre is assumed to be $21,000/Acre.
(3) Metrics for US gas producing properties
This is the residual deal value. The implied $39,428/Daily BOE in this deal compares well with the average for all gas weighted US deals since 1-Jan-2010 at $41,052/Daily BOE. The implied metric for proved reserves at $11.04/BOE is slightly higher than the average for all gas weighted US deals since 1-Jan-2010 at $9.84. However, the proved reserves number used in this deal are as of yearend 2010, and the current figure is likely to be higher because of significant ongoing drilling.
Source: Derrick E&P Transactions Database. US producing properties, Deal Value > $10 million, Announce Date on or after 1-Jan -2010, Hydrocarbon = gas
Source Documents:
Acquisition ppt

View more presentations from derrick_anitha
Posted by 1Derrick at 7:41 PM No comments: