Liberia on course to prove oil riches in 2011. Companies that stand to gain..

Liberia  is a country on the west coast of Africa, bordered by Sierra Leone on the West,Guinea on the north, Côte d'Ivoire on the east, and the Atlantic Ocean on the south. The potential for significant oil and gas discoveries in Liberia is huge, given some recent exploratory success in the region, especially Anadarko’s Mercury and Venus discoveries in neighbouring Sierra Leone’s waters. No commercial deposits have so far been found in Liberia and therefore there is no production or field development. However, this might soon change, as companies are looking to drill different plays than the old conventional structural traps. Here are the companies active in Liberia and looking to drill in 2011 and 2012.


Material has been sourced from Derrick Petroleum's exhaustive data on exploration and deals. The Derrick Petroleum Planned Exploration Wells Database is an extremely useful research tool to keep track of exploratory drilling of companies by region, year, etc. It will also be useful to E&P companies for identifying farm-in opportunities and to oil field services companies for identifying sales opportunities.

Table showing companies looking to drill in Liberia. Source: Derrick Petroleum Planned Exploration Wells Database.
Anadarko operates blocks LB 15, LB 16 and 17 which cover an area of 3400, 3225, and 3150 sq km respectively. In 2008, Anadarko acquired a 4700-sq kms of 3D-seismic survey on these blocks. The 3D was used to develop deepwater Cretaceous fan prospects. A key target called Montserrado (Cobalt) in Block 15 is planned to be drilled in H2 2011. The prospective resources for the Cobalt prospect is estimated to be about 1.2 bbls. Anadarko holds 57.5% interest along with Tullow Oil (25%) and Repsol YPF (17.5%) 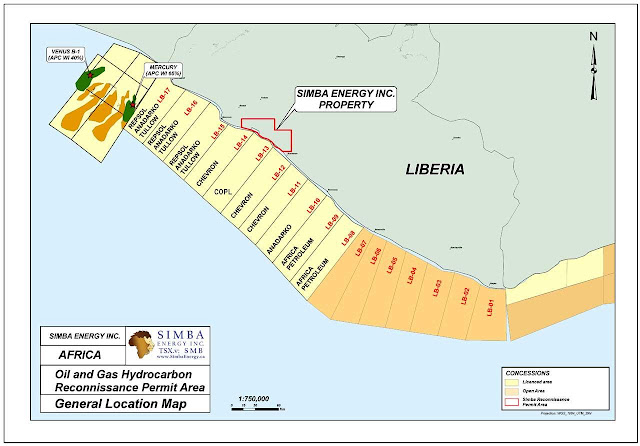 Map showing location of Liberian Blocks along with their operators. Source: Modified from Simba Energy.
Simba Energy has a 100% interest in the onshore NR-001 licence which covers an area of 1,366 square kilometers within the Roberts and Bassa Basins of south coastal Liberia. An Application to convert its current Hydrocarbon Reconnaissance Licence NR-001 into a Production Sharing Agreement (PSA) has been submitted to the Liberian government. The company carried out an oil seep survey on its property in 2010 using a team of 25 geology students. Reportedly, oil seeps were found on all their traverses. Evaluation of the oil associated with the seeps indicates it is economically desirable ‘mature oil.’
Chevron operates blocks LB-11, LB-12 & LB-14 which together cover an area of ~9,600 sq km. Two wells are scheduled to be drilled on these blocks in 2011 and 1 in 2012. Cheveron has a 70% interest in the blocks while Oranto Petroleum has 30%.
African Petroleum Corporation Ltd (APCL) has a 100% interest in 2 blocks: LB-8 and LB-9. The company has completed the acquisition and interpretation of about 5,100 sq km of 3D seismic over these blocks. About 40 leads and prospects have been identified s in the Upper Cretaceous section, some of which have been said to be similar Anadarko’s recent discoveries at Mercury and Venus, immediately to the north west. The Company has contracted the ultra deepwater semisubmersible, Maersk Deliverer to drill two exploration wells over the blocks with the first well in June 2011 as part of a two-well programme.
In all 5 wells are scheduled to be drilled in 2011. The potential is enormous!
For more information of discoveries and exploration plans for the following West African countries, click on the following links. Cote D’ivoire; Ghana discoveries; Ghana Exploration in 2011, Exploration in Mauritania, Benin & Togo; Angola; Sierra Leone; Sengal; List of West African discoveries in 2010 – 2011.

For more presentations on "Liberia", use our oil and gas document library: