Hilcorp’s founder just moved up the list of Forbes richest Americans with last month’s announcement that Marathon Oil would acquire his subsidiary Hilcorp Resources Holdings, LP’s assets in the Eagle Ford for $3.5 billion. Also lining its pockets is partner, Kohlberg Kravis Roberts & Co LP, who invested $400 million alongside HRH’s parent affiliate Hilcorp Energy Company in a 60:40 joint venture just 11 months ago. KKR’s “quick flip” is a wonderful story line when you consider the New Yorkers pulled the same trick with East Resources last year. There, KKR invested $325 million in advance of the Marcellus rush and turned that initial investment into $1.5 billion in less than a year when Shell came calling with $4.7 billion. Now KKR has pocketed another billion plus from a major, proving that every once in a while, Wall Street guys can make money in oil and gas. 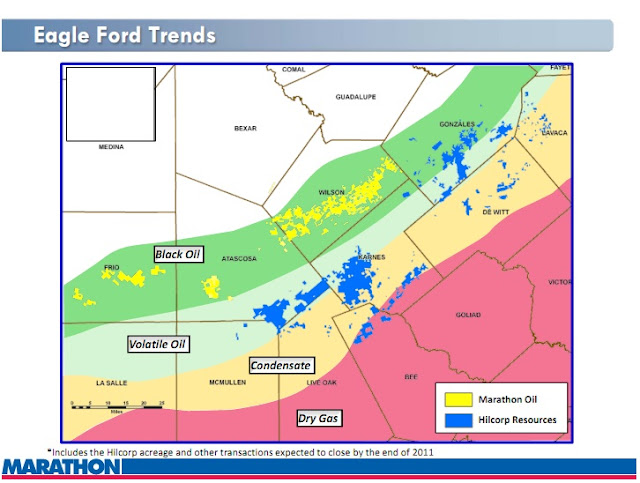 Looking back—
Those on the sell side of Hilcorp include some of the industry’s greatest majors, aka Amoco, Chevron, Exxon, Texaco and probably Marathon; who all spun off non-core assets so they could focus on more supposed profitable projects overseas. Fast forward, these same majors are now back, fast and furious, acquiring some of the same lands they once sold to independents like Hilcorp. And like KKR, the top guns at Hilcorp probably never imagined the quick riches they might receive selling assets to the likes of Marathon. But here we are.
As for Marathon—
This transaction tips the scale in South Texas shale sales and possibly recasts a deal for Forest who is still looking for answers on their acreage. Shortly after this deal, SM Energy reported two JVs for its Eagle Ford acreage, reaping more than $900 million. Mitsui paid ~$11,000 per acre and Talisman and Statoil teamed to pay ~$14,600 per acre.
In addition, Marathon’s generosity must feel good for all recent Eagle Ford claim jumpers (PVA & Rosetta drilling their own projects); promotees (Lewis, Chesapeake & Pioneer) and promoters (BP, CNOOC & Reliance) who now look prudent for early bets in the play. If you take the math further, some might argue that $10,000 per acre looks cheap now.
But not cheap enough? If you consider the Koreans recent $14,000 per acre purchase for the right to play on Anadarko’s JV acreage, lands once owned by TXCO, an old fashioned exploration firm who went belly up on the eve of the Eagle Ford... never to fully realize the full potential of its South Texas acreage thanks to its untimely timing. As Hilcorp and KKR just proved... timing is everything.
Behind the numbers
For those that like simple math the Marathon metrics yield $25,000/acre based on the price of $3.5 billion divided by 141,000 acres. However, the deal does include 7,000 boe/d, which, if priced at $70,000-$80,000 boe/d, yields $490-$560 million for the proved reserves and only ~$2.98 billion for acreage. These calculations then translate into metrics of $20,851-$21,348 per acre, well above the $13,975 per acre set in Anadarko/KNOC JV transaction announced in March. But the Marathon deal is all cash, whereas Anadarko’s JV is all carry, widening the gap even further between the acreage valuations for the two transactions on a discounted cash basis.
KeyBanc Capital Markets analyst, Jack Aydin, who booked the deal at $21,100 per acre notes the value of this transaction “is toward the high end of the market’s expectations and considerably higher than other recent transactions in the play” where prices have run from $8,000-$15,000 per acre.  PLS also estimates the average price per net acre for 14 Eagle Ford transactions to be $8,400 per net acre. Wells Fargo analysts were more succinct. They called the deal “very rich”.
The following interactive chart shows the recent Eagle Ford transactions sorted by $/acre-
Powered by Tableau
What’s behind the $25,000 per acre?
Some are starting to see the Eagle Ford condensate window as the best onshore play in the country. Marathon sees 400-500 mmboe resource potential from its position. Crunching the numbers, $3.5 billion for 473 mmboe of total risked reserves works out to $7.40/boe.  Looking at the acreage from a resource perspective works out to 3,355 boe per acre. (473 mmboe/141,000 net acres). Eyeing Marathon’s disclosure, the breakout by window is telling.  Of the 473 mmboe risked resource, 250 mmboe are under the 41,000 net acres in the condensate window – or 53% of the resource on 29% of the acreage.  Marathon’s EUR for the condensate window is 965 mboe, versus 645 mboe for the volatile oil and 445 mboe for the black oil windows. That’s in the ballpark of Petrohawk’s guidance for Blackhawk acreage with EURs of 1,070 mboe, also in Karnes and Dewitt counties.
Assuming the boe’s are valued equally across the play, the condensate window acreage would be valued nearly two times higher than volatile oil window and three times as much as black oil window.

To see what other operators are reporting about "Eagle Ford", use our oil and gas document library:

Powered by Derrick Petroleum Oil & Gas Search Tool
Plans—
Overall, the Eagle Ford acquisition brings Marathon’s resource holdings to almost a million net acres across North America including the Eagle Ford, Bakken, Woodford Niobrara and in-situ position in Alberta, Canada. As it spins away from refining, these assets will give Marathon 35-40 working rigs in the U.S. and a strong oil sands push in its Birchwood in-situ acreage which altogether could create 175,000 boe/d of new unconventional volumes in the 2016-2017 timeframe, 1/2 that from the Eagle Ford.
QUICKLOOK
Posted by 1Derrick at 4:23 PM No comments: Links to this post