After tying up a $7.2 billion alliance with Reliance, BP announced today the intention of selling its interests in a number of operated oil and gas fields in the UK. The assets involved are the Wytch Farm onshore oilfield in Dorset and all of BP’s operated gas fields in the Southern North Sea, including associated pipeline infrastructure and the Dimlington terminal.


These divestments will allow BP to focus resources and investment on its diverse central North Sea, northern North Sea, West of Shetland and Norway assets and on successful delivery of its new major projects.

Trevor Garlick, Regional President, BP North Sea said: “The North Sea is a significant business for BP and we are currently investing here at the highest level for more than ten years, with four major new field development projects underway in the UK and two in Norway. The assets we intend to divest are of high value but find it difficult to compete for capital and resource within our North Sea portfolio. We believe they will attract earlier investment and be of greater value to a new buyer.

BP aims to complete the divestments around the end of 2011, subject to receipt of suitable offers and regulatory and third party approvals. 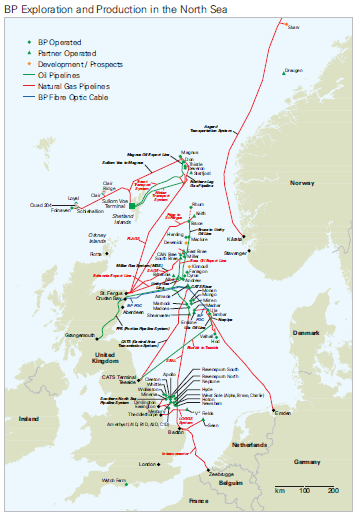 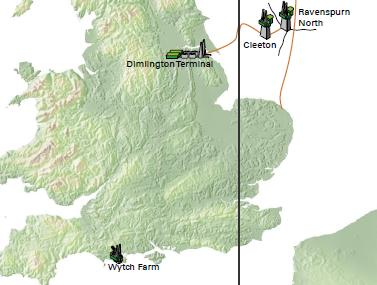 The equity being offered for sale by BP is as follows:

Wytch Farm
All of BP’s equity which is: 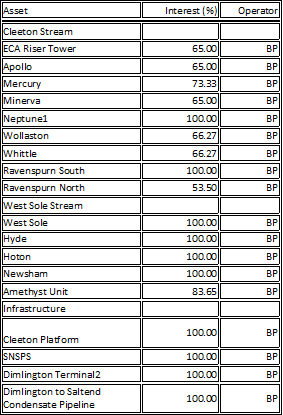 BG group and Ophir Energy are planning to continue with their exploration activities off Tanzania after their third consecutive success with Chaza-1 in Block 1. The earlier two wells, Pweza-1 and Chewa-1, both in Block 4, discovered significant quantities of gas in them. 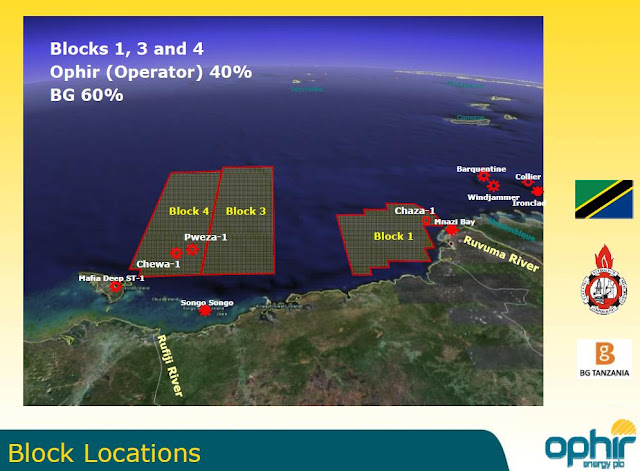 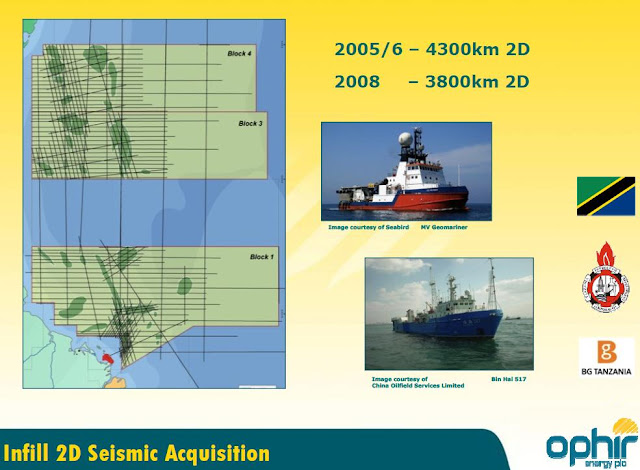 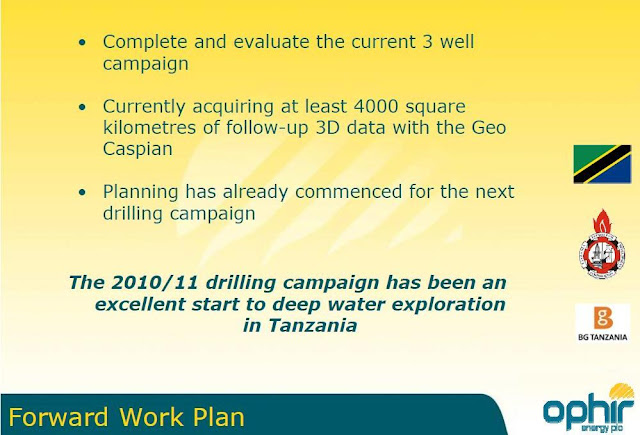 Posted by Sanjay Samuel at 6:30 PM No comments: Links to this post 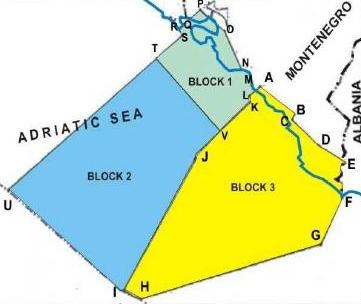 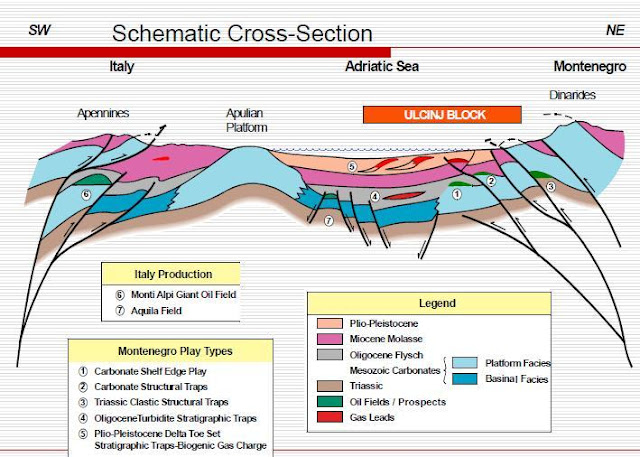 Posted by Sanjay Samuel at 6:13 PM No comments: Links to this post 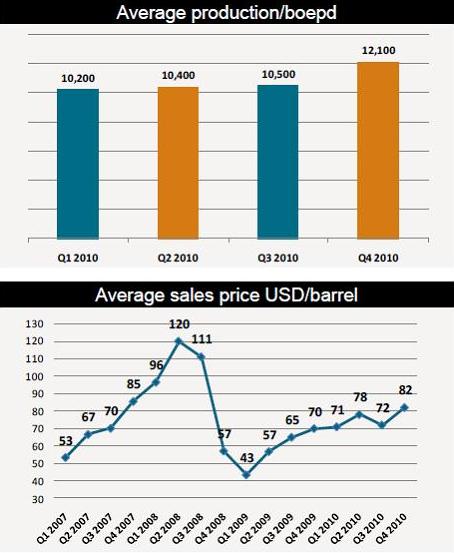 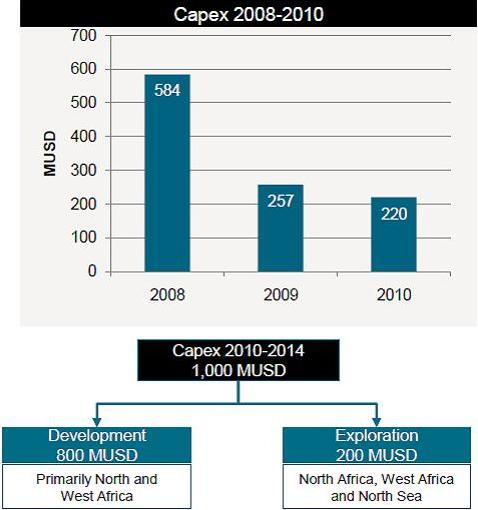 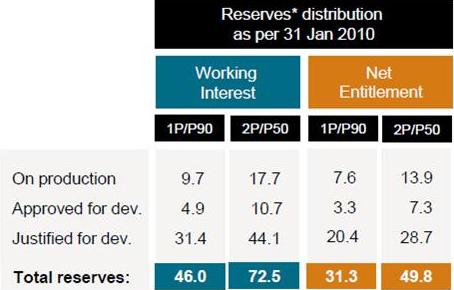 Posted by Kesav Gupta at 2:40 PM No comments: Links to this post

Marcellus, Eagle Ford and Permian Basin - The top three regions for Oil and Gas M&A in US 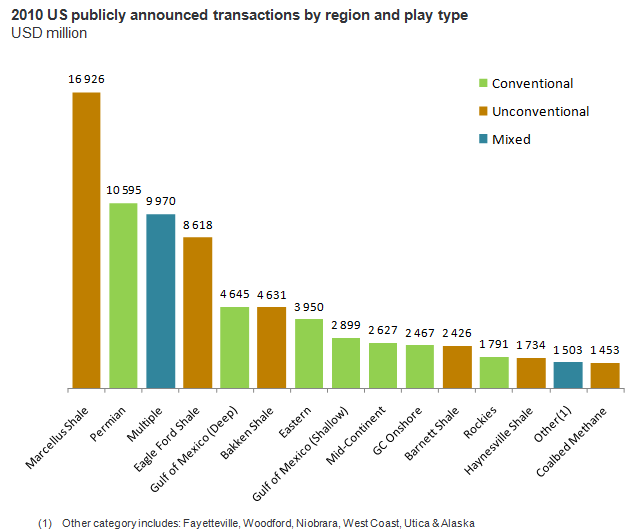 New plays like the Niobrara and Avalon Shale should see additional deal flow in 2011.
Posted by Rupesh Govindan at 1:19 PM No comments: Links to this post

BHP debuts in US shale business by purchasing Chesapeake's Fayetteville assets for $4.8 billion

BHP Billiton has made its first move into the US shale gas business with the acquisition of Fayetteville shale assets from Chesapeake for $US4.75 billion cash. Chesapeake's Fayetteville shale assets include approximately 487,000 acres of leasehold and producing natural gas properties located in Arkansas. This is the second largest position in one of the largest gas fields in the world. This acquisition will increase BHP Billiton's net reserve and resource base by 45%. These assets currently produce approximately 415 MMcf/d and include development options that will support substantially higher production over a 40 year operating life. The assets include 2.4 Tcf of proved reserves and 10 Tcf of total risked resource potential. The transaction also includes midstream assets with approximately 420 miles of pipeline. 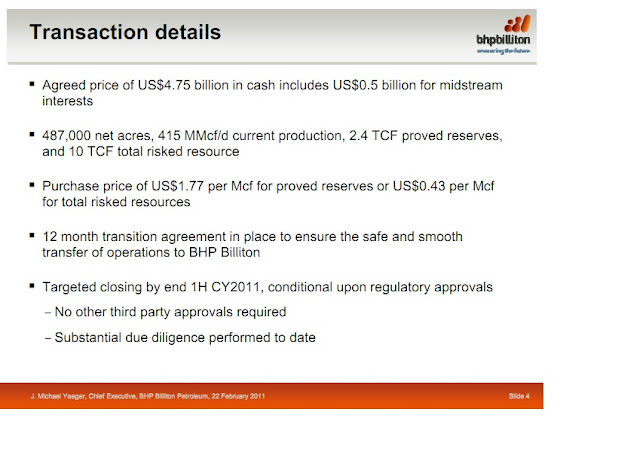 It’s a material asset with room to grow:
The acquisition is consistent with BHP Billiton's strategy of investing in large, long-life, low cost assets with significant volume growth from future development. BHP said it is paying $1.77/Mcf of proved reserves which is consistent with the recent ExxonMobil’s acquisition of Petrohawk’s Fayetteville assets for $1.92/Mcf. BHP aims to triple daily production from the new asset as the field is developed, and plans to spend $800 million to $1 billion a year over 10 years to develop the field, BHP chief Michael Yeager said. 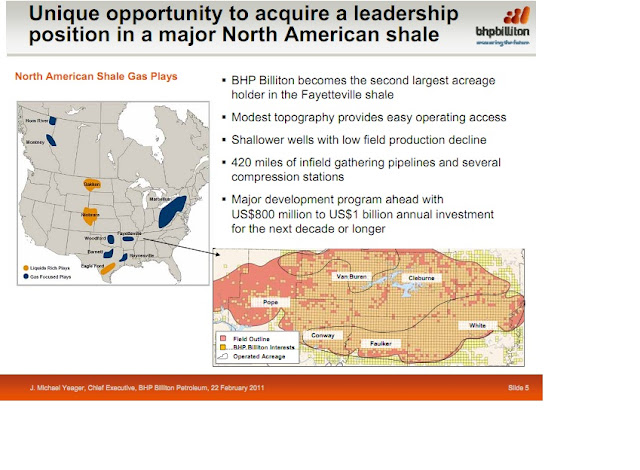 Unconventional gas to quench the thirst of US gas demand: 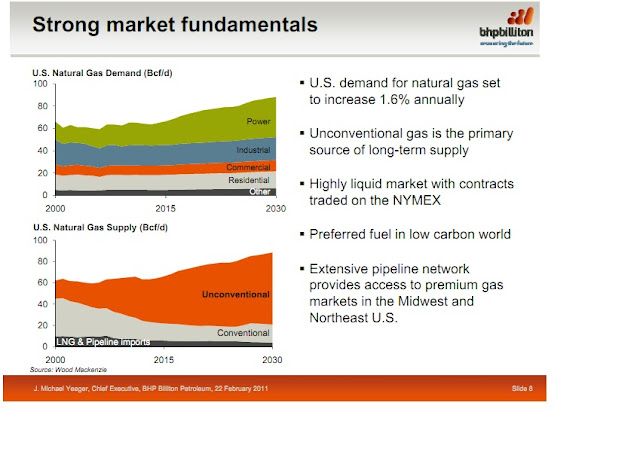 Chesapeake says, “Enormous value created through JV transactions – More to come in 2011”
This Fayetteville transaction is in line with Chesapeake’s 2011-12’s “25/25” plan, ie., reducing debt by 25% by selling assets, while increasing production by 25%. Chesapeake’s drilling capital to be invested in liquid plays will move from 10% in 2009 to 70% in 2012. In 2010, Chesapeake invested ~$5.0 billion of leasehold in liquids-rich plays which will be largely recovered from JV partners in next few years. In the past two years, Chesapeake has created enormous value through JV transactions and more to come in 2011… 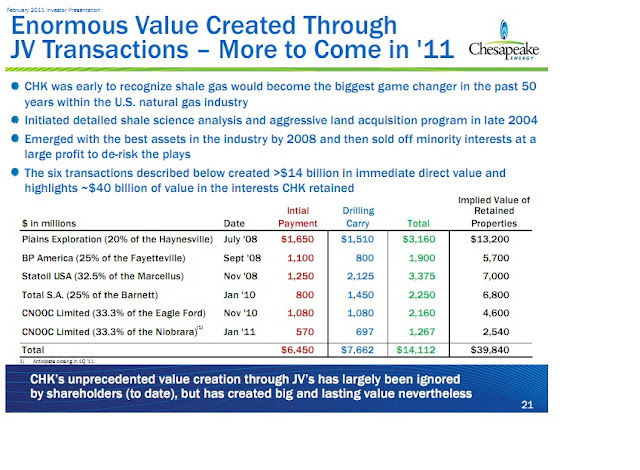 Posted by Anitha Bharathi at 12:52 PM 3 comments: Links to this post

Cenovus, which was split from Encana in December 2009, would be following its predecessor that has formed joint ventures with Petro-China, CNPC and Korea Gas to develop unconventional resources.
Cenovus Energy Inc is currently seeking a joint-venture partner to speed development of its Alberta oil sands holdings and boost the value of its reserves. 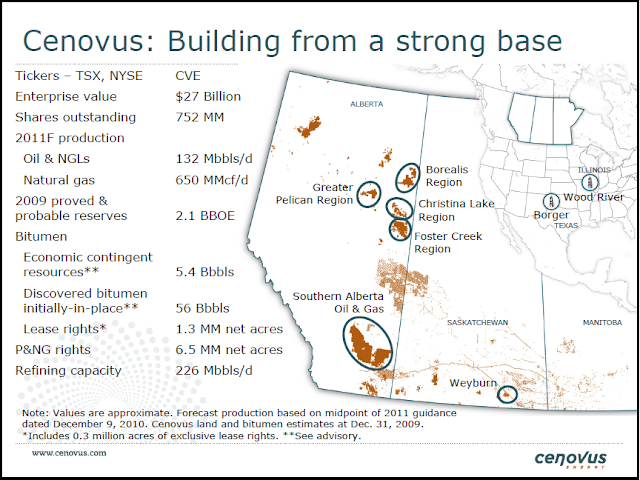 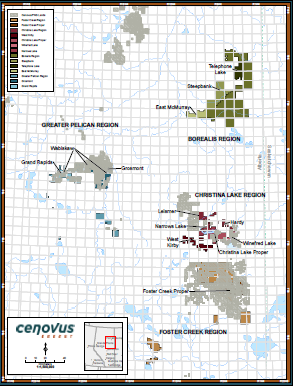 -- Pelican Lake: $175-200 million of capital; $14-15/bbl operating cost; 40-45 gross strat wells; Start drilling infill patterns; Potentially accelerate drilling program.
-- As of December 31, 2010, Proved bitumen reserves - 1,154 MMBO; Proved plus Probable bitumen reserves - 1,677 MMBO.
-- The increase in reserves is mainly attributed to the approved expansion of the Foster Creek development area and increased recovery due to advancements in technology, such as wedge wells, and improved reservoir performance.
-- In addition to the expanded reserves numbers, there was a significant increase to the company’s bitumen economic contingent resources in 2010, mainly attributed to the assessment data collected from stratigraphic (strat) wells. Best estimate bitumen economic contingent resources at year-end 2010 were 6.1 billion bbls, a 13% increase over 2009.
-- On a gross basis, about 260 of the assessment wells were drilled at the company’s oil sands properties in 2010 and an additional 450 strat wells are expected to be completed in 2011.
-- In addition, Cenovus has identified 10 other oilsands projects - Narrows Lake, Grand Rapids in the Greater Pelican region and Telephone Lake project in the Borealis region for future development.

Posted by Rupesh Govindan at 11:26 AM 3 comments: Links to this post