Natural gas company, Range Resources Corp reports increase in its Q1 2011 production as the company focused on drilling the liquids-rich portion of the Marcellus Shale play in Pennsylvania and the Midcontinent regions. The company's production volumes up 17% to 545.5 mmcfepd, and they are on track to produce 400 mmcfe by the end of 2011. Range says by the end of 2012 they will be producing 600 mmcfe. Due to the outstanding performance of its existing wells combined with the initial performance of the newly connected wells, Range's Marcellus production has temporarily outgrown the existing infrastructure. 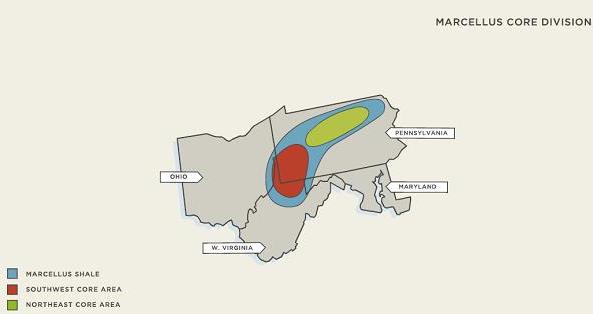 Range Expects the Marcellus Division to be a Value Driver for the Future
The Marcellus now appears to be the second or third largest natural gas play ever discovered in the world.  With the benefit of a large, liquids-rich window in southwestern Pennsylvania, the Marcellus offers the best economics of any large-scale, repeatable play in the US.  A significant portion of Range's acreage also offers the benefit of natural gas potential from the Upper Devonian and Utica shale formations that lie above and below the Marcellus.  In 2011, Range is directing 86% of its capital budget toward development drilling in the region. 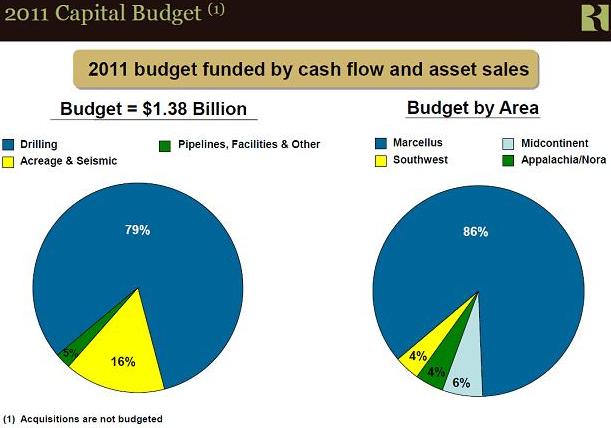 Range has ~550,000 net acres in the SW part of the play. Over 800 wells have significantly de-risked 460,000 of Range’s acres. Assuming 80 acre spacing, and that 80% of this acreage will be drilled, this equates to 4,600 wells. The resource potential is for the Marcellus and does not include any potential from other shale zones. Utica and Upper Devonian shale wells have been completed and are currently waiting on pipeline connection. 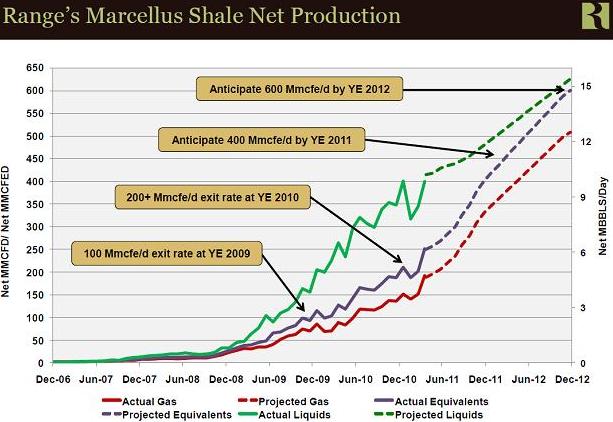 Range is giving up 113 mcfe a day of natural gas production capacity with its 52,000 acre Barnett Shale sale. The $900 million Range gets for Barnett, coupled with cash flow and another $200-250 million in expected non-core asset sales this year, not only funds 2011 Marcellus development but also carries $400 million forward for 2012 development. Couple in 2011 and 2012’s development and production growth and Range expects 2013’s capex will be funded solely from its own cash flow. 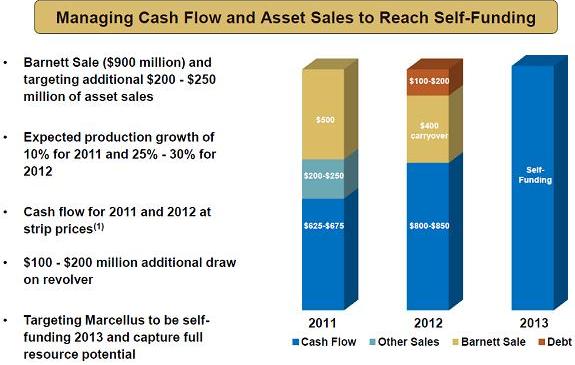 EOG Chief Executive Officer Mark Papa disclosed that EOG had sold $647 million worth assets in its goal of divesting $1 billion worth of assets this year. He added saying, “In the first quarter, we received $260 million from asset sales. Since March 31, we've received an additional $387 million of proceeds and we're actively working on an incremental $400 million of sales.”
The sale that was subsequent to the first quarter included all mature gas-producing properties in South Texas and New Mexico. The major portion of that was some Cotton Valley production, Cotton Valley/Travis Peak production in the East Texas area.
The M&A activity of EOG in 2011 is captured as follows-

Source: Derrick Petroleum-E&P Transactions Database
Try this free document search tool
Where could the other $400 million sale be focused??
The operations map of EOG is as follows 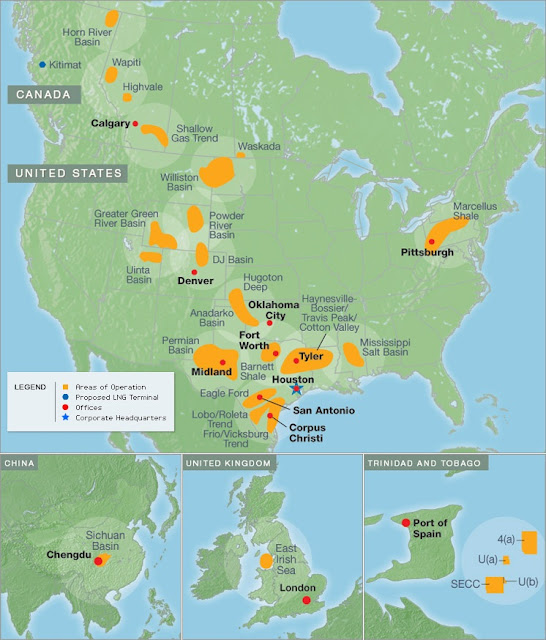 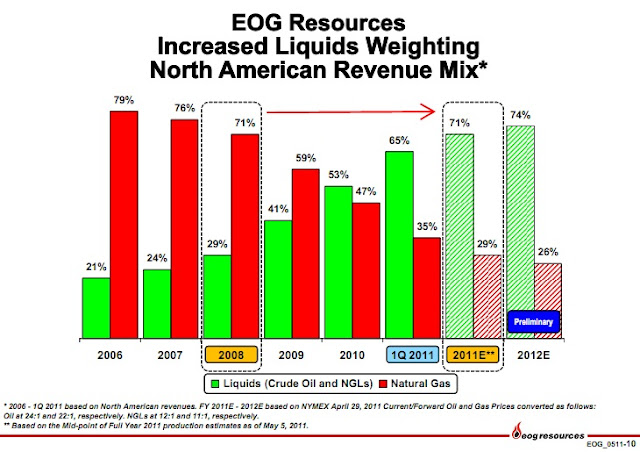 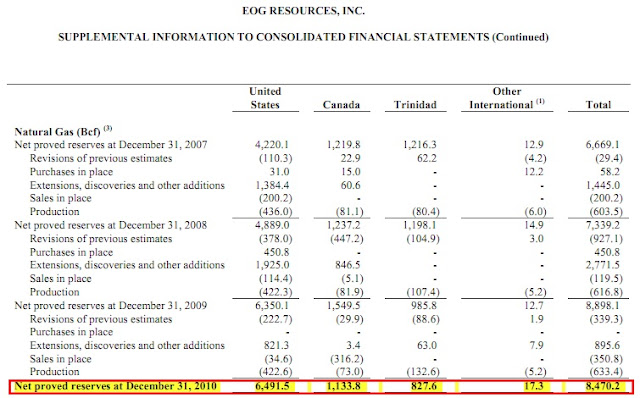 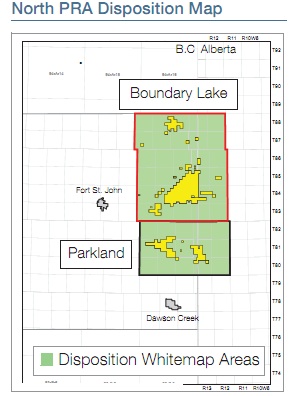 Suncor strongly favours a single bid for all assets but will consider offers on the individual areas identified. The highlights of the offering are as follows: 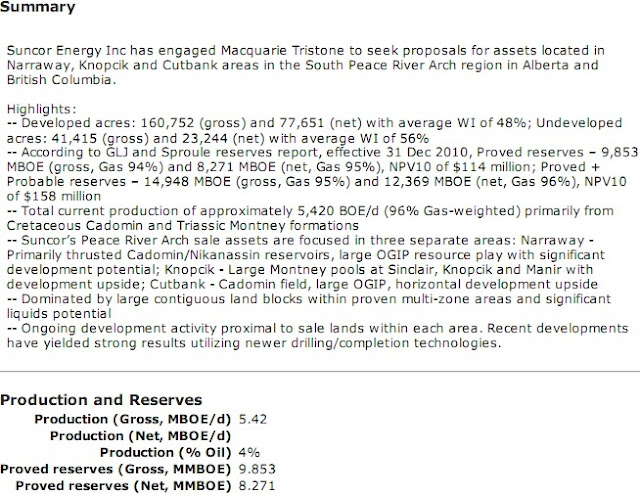 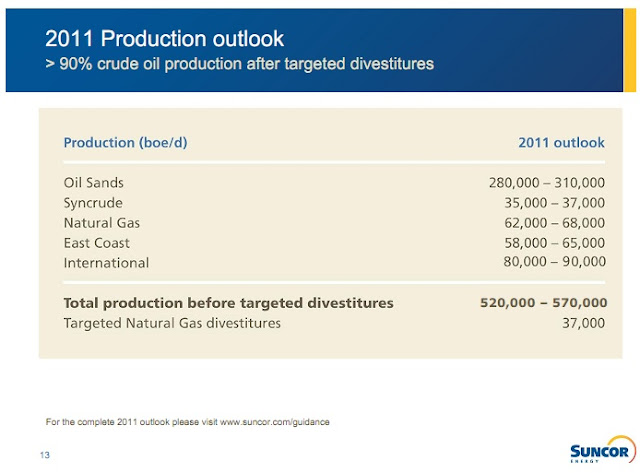 Source: Suncor Energy- May 2011 Investor Presentation
Suncor's 2011 outlook is to divest natural gas weighted assets with production of 37,000 boe/d (worth $1.5 billion based on $40,000/ flowing boe) and increase the oil production from 50% to more than 90% after the targeted gas divestitures. Suncor joins the "Marathon Run" of shifting focus to OIL.
The following table shows the 2010 gas divestitures of Suncor Energy-

Try this free document search tool
Posted by Anitha Bharathi at 2:57 PM No comments: Links to this post

WILL ALBANIA BE THE NEW EXPLORATION HOTSPOT?

The Republic of Albania lies in south eastern Europe. It was under communist rule, but the communist party collapsed in 1990 and the Republic of Albania was formed in 1990. In the last decade Albania has evolved into a stable parliamentary democracy in a modern free market economy with a regulatory environment structured to attract foreign investment. 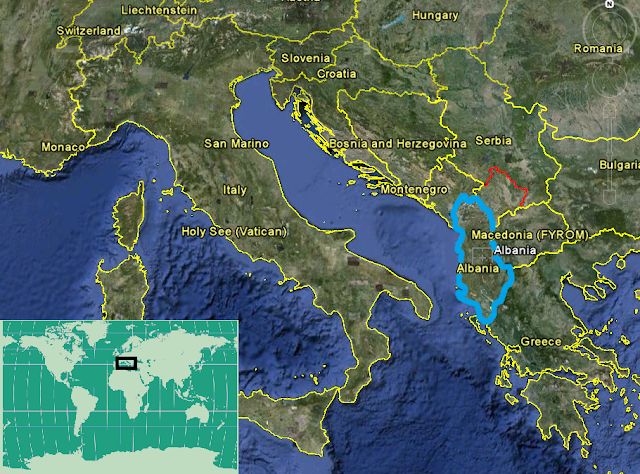 Figure 1: Location Map of Albania (Shown in thick blue). Source, modified from Google Earth.
EXPLORATION IN ALBANIA
The petroleum industry is one of the oldest industries in Albania, dating back 2000 years when the Romans mined bitumen. In modern times, exploration kicked off during the First World War when oil was discovered in Drashovica. Later in the 1920’s, the Patos Marinza (largest onshore oil field in Europe) and the Kucova fields were discovered with help from Italian investments. World War II led to a decline in output. The 1948 production was 1374 kboe, during which time the erstwhile Soviet Union began to play an important role in the industry (up until 1961 when Albania broke ties with the Soviet Union, and China starting playing an important role). Maximum production was achieved in 1974 with 17380 kboe annually, and Albania broke ties with China 4 years later. In 1989, total annual production was 7900 kboe and in March 1994 it was 3749 kboe. This decline was in part due to poor economic policies, lack of materials and natural decline. In 2001, it had declined to 2379 kboe. According to the CIA world factbook, total annual production in 2010 was 1971 kboe.

BIRTH OF MODERN EXPLORATION
The ultra- Stalinistic rule of the Enver Hoxha regime up until his death in 1985 plagued the Albanian economy, but after the collapse of the Soviet Union through the late 1980’s and the death of Hoxha in 1985, the Albanian economy opened up and culminated in the country adopting democracy in 1990.
The country’s first offshore licencing round was held in 1990, with contracts taken up by international companies, including Deminex, Chevron, Occidental, Hamikon and AGIP. This was followed by the first onshore round in 1992 which offered access to seven onshore blocks, won by a French company called Coparex, a Croatian company called INA Naftaplin and Shell.  In November 1994, a foreign investment law was enacted to attract and protect foreign investment, guard against nationalization or expropriation of assets and allow funds to be freely transferred in and out of the country. The second onshore licensing round in November 1995 was attended by 30 oil companies. The offerings were two onshore blocks not awarded in the first licensing round, eight new onshore blocks and one block in the Adriatic Sea.

OIL DISCOVERIES IN ALBANIA
There have been many discoveries in Albania and there are also a few fields producing. These are listed in the following table 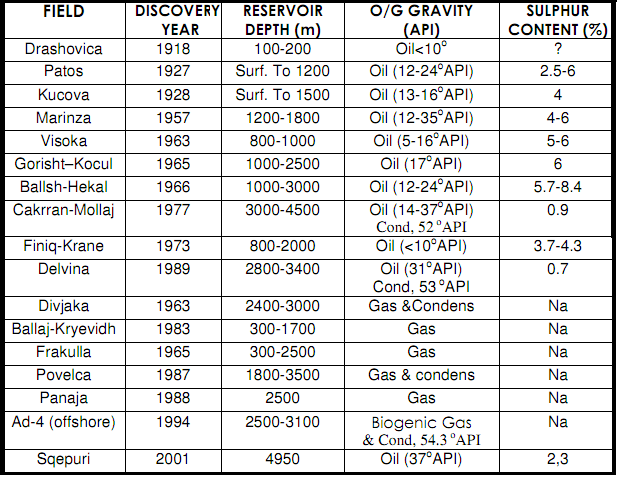 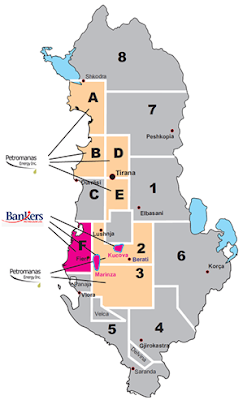 Figure 2: Licenced exploration areas in Albania. Source, Manas Petroleum
SHELL AND COPAREX DO THE DIRTY WORK
Shell and Coparex spent a great deal of resources in acquiring and interpreting over 4000 km of seismic data over their onshore licences. The result of their seismic imaging and analysis was the recognition of a deep underthrust structure (~ 4 km deep) which according to them had the potential to host  820 mmboe. This same giant underthrust structure which hosts all of Albanias hydrocarbon reserves was also present below their licences in the form of a giant anticline. However, after all this good work, Shell and Coparex decided to abandon their licences due to conflicts in the neighbouring Kosovo and due to extreme unrest within Albania. This, as it turns out, was a boon for Manas Petroleum which later acquired these properties with giant, well defined, drill ready prospects.
THE ECONOMIC X-FACTORS
Although not recommended as a destination to spend an annual vacation, Albania has all the key elements to ensure a good return on investments through oil and gas companies active in the area. The key factors are:
1.        Location: - Excellent access to European markets
2.       Stable political environment
a.       Constitutional Democracy since 1991
b.       Member of WTO, regional and European trade organizations
c.        NATO member
d.       Currently undertaking key steps to become EU member (applied in June 2009)
3.       Hydrocarbon rich
a. Albania is home to the largest onshore oil field in Europe (Patos Marinza; 7.5 billion barrels OOIP)
b. Multiple active oil fields
4.       Favourable economics (for the number crunching analysts)
a.        Attractive terms
b.       10 - 15% royalty
c.        50% profit tax
d.       100% cost recovery
e.       Hydrocarbon law allows 100% export of crude oil
f.        100% cost recovery & working interest
g.       25 year term + 5 year extensions 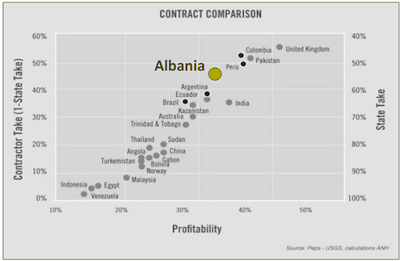 Figure 3:  Comparison of petroleum exploration and production  contracts between different countries. As can be seen, Albania ranks quite high in terms of financial and profitability.


THE ACTIVE PLAYERS
Fortunately, for number crunching analysts, there are a few players within Albania actively pursuing exploration and production. These companies along with their assets are listed below:
1.        Bankers Petroleum Ltd. is a Canadian-based oil and gas exploration and production company focused on developing large oil and gas reserves in Albania. The Company operates and has 100% interest and rights to develop the Patos-Marinza heavy oil field (7.5 billion barrels OOIP; 140 million barrels produced to date; 6º to 24º API Oil), and has a 100% interest in the Kucova oil field (297 million barrels OOIP; 24 million barrels produced to date; 14° to 22°API Oil). It also has interests in the Block F Exploration Acreage consisting of 185,000 acres with gas and oil potential.
2.       Stream Oil and Gas has a 100% working interest in  3 producing heavy oil fields (Ballsh, Cakran, Gorisht) and the Producing Delvina gas field with 3 sister structures in phase II exploration
3.       Petromanas Energy Inc. has 3 production sharing contracts (“PSCs”) comprising  6 onshore blocks, a 100%  working interest in Blocks A,B,D,E,2 & 3 comprising 1.7  million net acres, and have 9 existing oil fields on blocks 2 & 3 which include the largest onshore oil field in Europe, Patos Marinza which is operated by Bankers Petroleum Ltd.
4.       Cairn Energy through its subsidiary holds a 100% interest in the Joni-5 PSC  which is valid for seven years from 9 September 2007.
5.       San Leon Energy and Beach Petroleum have a 75% and 25% interest respectively in the Durresi Block which lies in the Adriatic Sea, offshore Albania and covers an area of approx. 4200 sq km. It contains the A4-1X gas condensate field, discovered in 1993, 30 km off the southern coast of Albania. 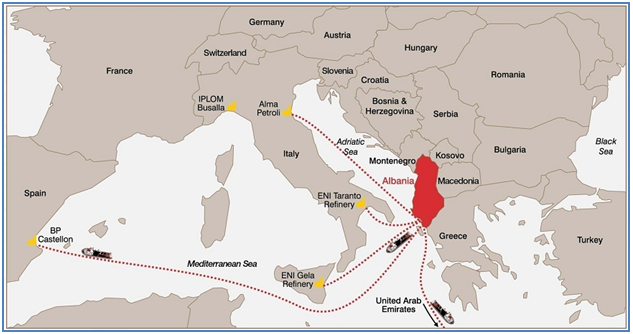 Figure 4: Figure showing possible export routes for oil produced in Albania. There are about 15 refineries in the Mediterranean that can process Patos-Marinza crude apart from the other oils that are produced in Albania. Source, Bankers Petroleum. The favourable location of Albania would make it very easy to transport the crude for refining and then for supply into thirsty European markets.

OK… SO WHO’S DRILLING AND WHEN??
The Derrick Petroleum- Planned Exploration Wells Database keeps track of the number of wells being drilled globally and sorted by operator, country, oil or gas, year of drilling and many other parameters. From this database, the number of wells planned to be drilled in Albania in 2011 are 4. These four wells to be drilled will be significant as 3 of these wells are to be drilled by Petromanas on the almost drill ready, giant prospects, that were mapped by Coparex and Shell before they abandoned their plans. The upside is huge, and the results of these wells have the potential to change the face of exploration in this small Mediterranean country. The latest discovery in onshore Albania was made by Occidental Petroleum on the Shpiragu discovery after the Shpiragu-1 well in the Sqepuri  subthrust structure located in Block 2 proved oil from the Eocene – Cretaceous fractured reservoirs. The result of the Shpiragu-1 well have seriously de-risked this area. Gustavson and associates commenting on the probability of success on the Petromanas Blocks state "The probability of success for a wildcat well in a structurally complex area such as this is relatively high due to the fact that it is in a structurally favorable area, there exists a proven hydrocarbon source and analogous production exists only 20 to 30 kilometres away”. These few players have the potential to strike it big in Albania. With favourable economics and easy access to refineries and markets, the country presents a good deal to companies wanting to invest.

Table 2: List of companies with plans to drill in Albania in 2011 and beyond. The number of columns have been minimized to fit the table on the page. The actual database has many more parameters listed and recorded. Source, Derrick Petroleum- Planned Exploration Wells Database.
Posted by Sanjay Samuel at 10:46 AM No comments: Links to this post