Cuba announced plans to drill five deepwater oil wells in the Gulf of Mexico beginning this summer, expressing confidence that its efforts will be rewarded with major new energy finds. We're about to move to the drilling phase," said Manuel Marrero, an official with the government authority tasked with overseeing Cuba's oil sector. "We're all really hopeful that we will be able to discover large reserves of oil and gas," said Marrero, who added that the ventures would be undertaken with the help of unspecified foreign companies. He said the deepwater wells were to be drilled between 2011 and 2013, and would be in waters ranging in depth between 400 meters and 1,500 meters. He did not specify which countries would be among the foreign partners working with Havana on the project. 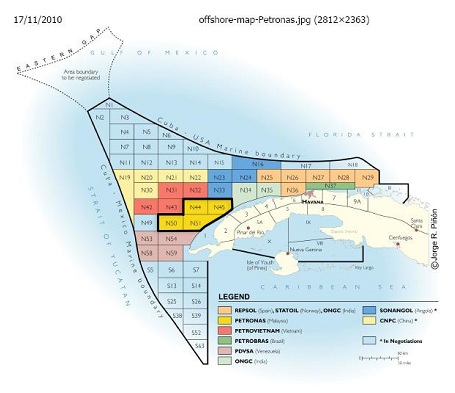 Studies estimate Cuba has probable reserves of between 5 and 9 billion barrels of oil in its economic zone in the Gulf of Mexico. In 2010, Cuba produced 21 million barrels of oil, about the same as it had extracted the previous year, representing a little less than half of its annual energy needs. Cuba imports that rest of its oil -- about 100,000 barrels per day -- from Venezuela.
In November 2010, Gazprom Neft acquired 30% stake in four offshore Cuba blocks from Petronas. Following is the snap shot this deal. 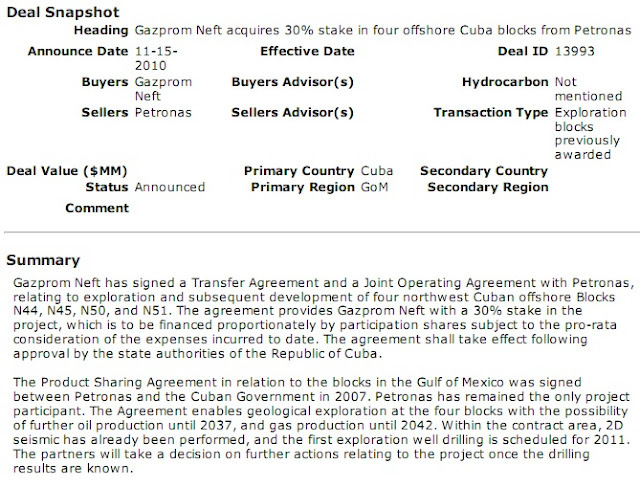 Oil sales from the Patos-Marinza oilfield in Albania during the first quarter averaged 11,894 bopd compared to fourth quarter sales of 10,424 bopd, an increase of 14%. Average production for the first quarter was 12,147 bopd.
Patos Marinza Oil Field
2011 Horizontal Program
The company drilled 60 successful horizontal wells in 2011. Horizontal well production forecast 135 bopd. 8 of 17 oil productive zones have been drilled and several more zones will be targeted in 2011 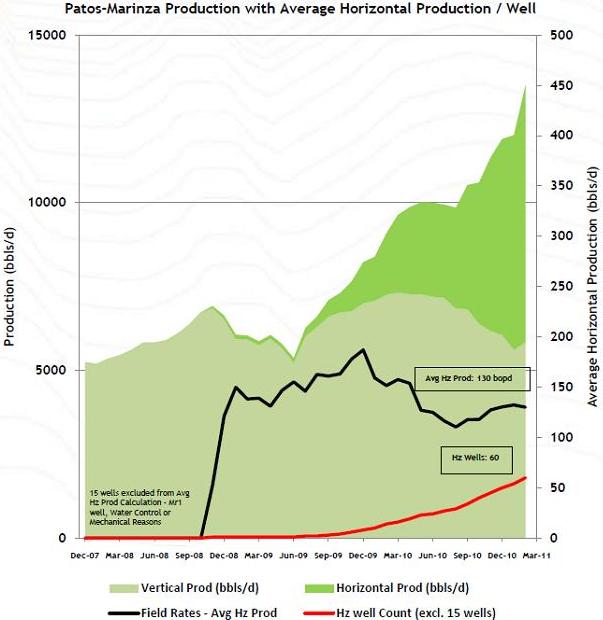 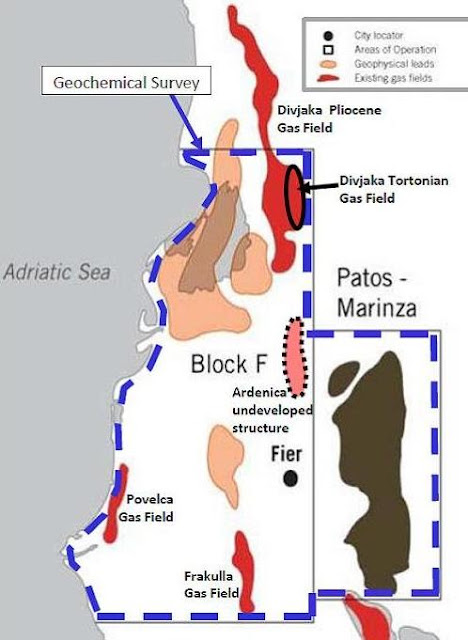 Kucova Oil Field
US$ 50 million Plan of Development (PoD) for the field has been approved by the Albanian authorities. Activity has commenced as part of the approved 2011 work program on the first group of wells with recompletion of two production wells, one water source well and the conversion of one water injection well n"; mso-ansi-language:EN-US;mso-fareast-language:EN-US;mso-bidi-language:AR-SA'>Continue reprocessing and interpreting 430 km of 2D seismic to detail identified anomalies for Q3 drilling. 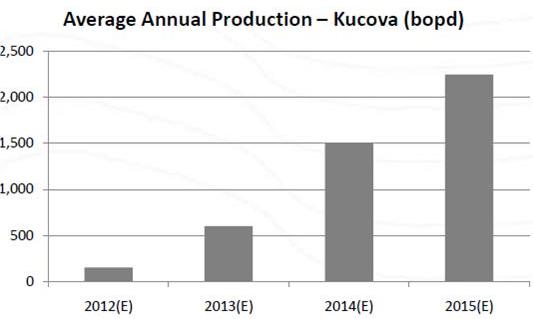 http://docsearch.derrickpetroleum.com/pageNav/view1/docId/11728-0000/Dong-Energy-Full-Year-2010-presentation.html
Posted by Kesav Gupta at 5:40 PM No comments: Links to this post

http://docsearch.derrickpetroleum.com/pageNav/view1/docId/11727-0000/Helix-2011-Company-Update.html
Posted by Kesav Gupta at 5:39 PM No comments: Links to this post

http://docsearch.derrickpetroleum.com/pageNav/view1/docId/11716-0000/PMG-2011-CORPORATE-PRESENTATION.html
Posted by Kesav Gupta at 5:38 PM No comments: Links to this post

http://docsearch.derrickpetroleum.com/pageNav/view1/docId/11713-0000/Bowleven-2011-Bank-of-America-Merrill-Lynch-Oil-Gas-Investor-Forum.html
Posted by Kesav Gupta at 5:37 PM No comments: Links to this post

Posted by Kesav Gupta at 5:37 PM No comments: Links to this post

http://docsearch.derrickpetroleum.com/pageNav/view1/docId/11697-0000/SWN-2011-Latest-Investor-Presentation.html
Posted by Kesav Gupta at 5:36 PM No comments: Links to this post

Exploration and production spending has increased by 60 percent in the past two years, which has stemmed declining production and extended oilfield life-spans. But the tax hike will now have exactly the opposite effect.

In the short term expect to see a noticeable reduction in exploration capex and an increase in the number of postponed investment decisions.

“Looking further out, the tax rise is likely to have a meaningful negative impact by way of reducing the absolute number of future development projects. Importantly, this ultimately means that more oil will be left in the ground, and over the long run this will likely generate a lower total taxable income stream for the government.”

Keith Morris, head of research at Evolution Securities, warns to expect a backlash from the industry, which wasn’t consulted on changes that takes the effective rate of taxation in the North Sea to an eye-watering 82 per cent.

If UK North Sea oilfield development and exploration stops, how would companies replenish the ever depleting reserves?

There are several emerging oil regions that are on the cusp of serious development and all of them would benefit from a step-up in Big Oil investment. At least in terms of geography the Celtic Sea may present one option. The Celtic Sea has been in the spotlight of late, particularly with Providence Resources planning a multi-well drill programme on known discoveries.

Now a new wave of exploration and appraisal work will reassess these prospects, against a backdrop of higher fuel prices and more efficient recovery techniques.

Africa is fast becoming a top destination for offshore exploration and development work, with both flanks of the continent attracting investment from the majors.

Anadarko, BG Group  and Cove Energy  have had success off the east coast and Tullow Oil, Aminex and Dominion Petroleum have high-impact projects up their sleeves. Meanwhile, on the continent's western coastline Tullow Oil’s success in bringing the Jubilee field into production has been the highlight so far.

South America is another potential hot-spot. A group of majors are drilling in the deep waters offshore Brazil, notably BG has made a number of discoveries here. Meanwhile Tullow Oil, Shell and Total - along with Wessex Exploration and Northern Petroleum – are drilling high-impact, deep water targets offshore French Guiana.

Maritech Resources sells majority of assets to Tana for $222 million or $24/barrel of proved reserves!!

Maritech Resources Inc, a wholly-owned subsidiary of TETRA Technologies Inc, entered into a Purchase and Sale Agreement with Tana Exploration Company LLC, a wholly-owned subsidiary of TRT Holdings Inc. Under the Agreement, Maritech has agreed to sell all of its interest in 21 federal offshore oil and gas leases in the Gulf of Mexico, one Louisiana offshore oil and gas lease and six leases in Louisiana state waters, which collectively represent approximately 79% of Maritech’s total proved reserves as of December 31, 2010. 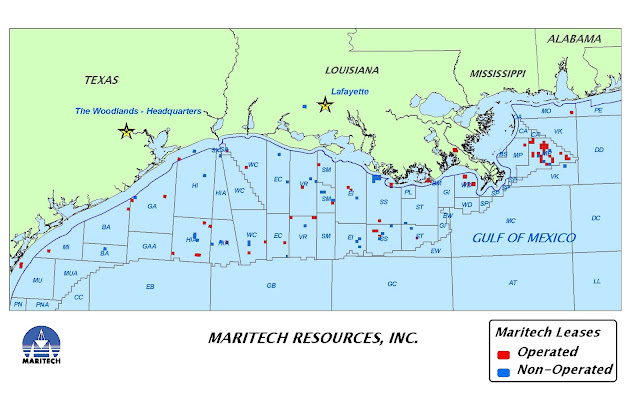 The assets to be sold include producing and non-producing wells and related reserves, production, contracts, platforms, equipment, gathering systems, production facilities, and other related properties. The sale has an effective date of January 1, 2011. The purchase price for the Assets is $222.25 million. 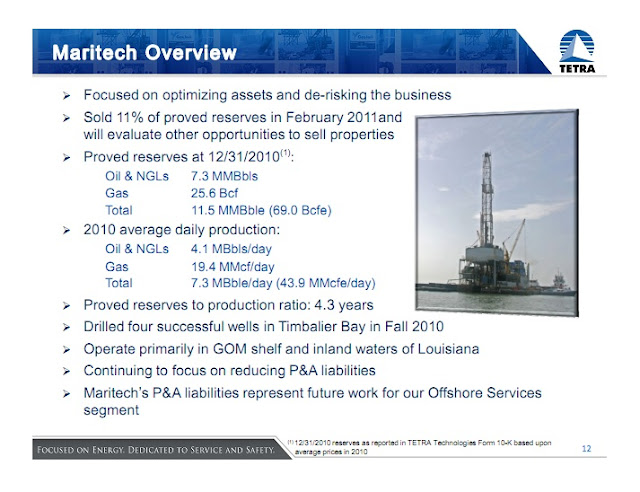 Maritech sells Proved Reserves @ ~$24/barrel!!
The table below shows the list of GoM transactions with metrics: 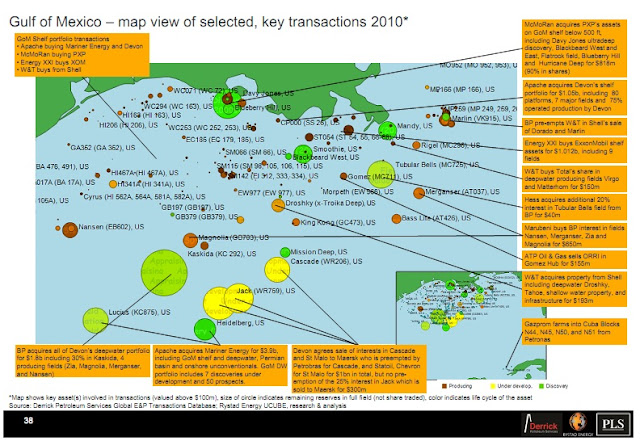