Post-sell offs, Conocophillips looks once again at growth – Capex up by 21% as against industry average of 11%

Conocophillips has outlined its 2011 capital expenditure program of US $13.5 billion, which  represents a significant increase in Exploration and Production (E&P) segment expenditures as compared to the Company’s last year’s budgetary program. Jim Mulva, chairman and chief executive officer said that, “This year’s capital budget reflects our emphasis on building the upstream business”.
Highlights: 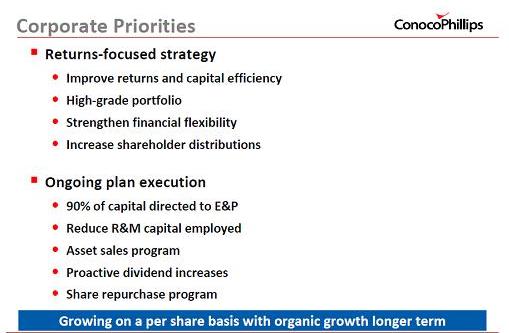 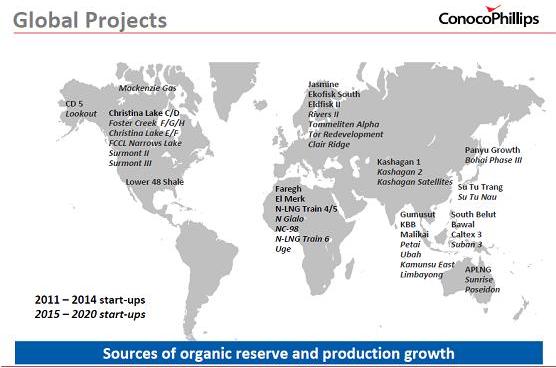 Jim Mulva also said that, “This year’s capital budget reflects our emphasis on building the upstream business," said Jim Mulva, chairman and chief executive officer. "We expect competitive returns from our increased investments in North American and Australian unconventional resource projects. In addition, we are pursuing organic reserve and production growth by converting our existing resource base to proven reserves, participating in high-impact exploration wells and building acreage positions for future development." 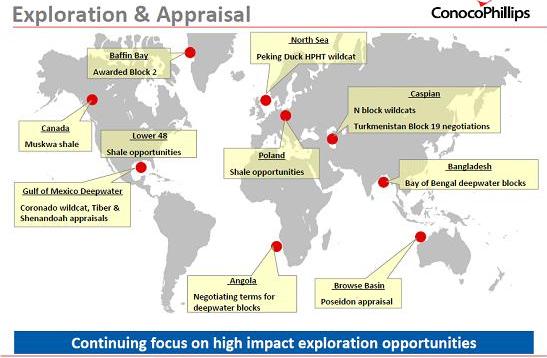 Posted by Kesav Gupta at 7:29 PM No comments:

Encana Corp has established a joint venture with PetroChina through the sale of 50% interest in its Cutbank Ridge business assets for C$5.4 billion. The business assets in this planned JV include the majority of Encana’s Montney, Cadomin and other natural gas assets on a portion of its British Columbia and Alberta lands. The properties involved in the transaction include current daily net production of about 255 MMcfe/d, proved reserves after royalties of about 1 Tcfe, as at the end of 2010, and about 635,000 net acres (1.3 million gross acres) of land straddling the British Columbia and Alberta boundary. The planned JV infrastructure, on a 100% basis, includes about 700 MMcf/d of processing capacity, about 3,400 kms of pipelines and the Hythe natural gas storage facility. 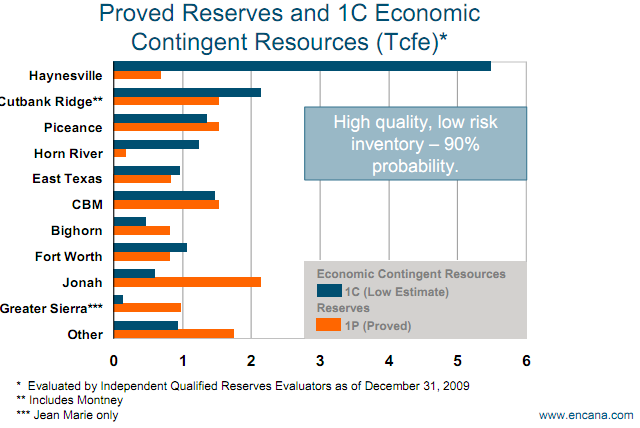 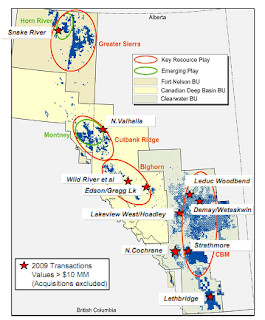 Analyst’s comments:
The oil & gas industry believes that one of the reasons for the Canadian dollar boost is that Encana’s 50/50 JV with PetroChina for C$5.4 billion. "Where we are positioned relative to other currencies ... is largely reflecting foreign investment news overnight," said David Watt, senior currency strategist at RBC Capital Markets, financial advisor to Encana with respect to this JV.
Following the announcement of this JV, Encana’s shares have surged C$1.37 to C$32.02 on the Toronto Stock Exchange. "If it wasn't for this joint venture, the stock would be down, that's for sure," Canaccord Genuity analyst Phil Skolnick said. He added, "It's big and it's positive." PetroChina is paying about 20% more than the US benchmark gas price, analyst Gordon Kwan estimates.
Alan Boras, EnCana’s vice-president of media relations said the Cutbank Ridge field, has “tremendous potential, but given natural gas prices and the cash flow we’re able to generate, we can develop that at a certain pace. “We want to accelerate that pace because we believe that is the best way to bring additional value to Cutbank Ridge.”
Encana established the sizable position in Cutbank Ridge in 2003, acquiring the majority of its land at an average cost of about C$700 per acre. However, the transaction values the land now at ~C$4,900 per acre.
Why are Chinese stepping into Canada???
Chinese companies are hunting for reserves worldwide in a quest to triple gas use in the growing economy in the next decade. To that end, the Encana deal could bolster efforts to establish a North American liquefied natural gas export industry.
Petrochina’s activities in Canada for the past 4 years include:

Click this for more info: http://www.derrickpetroleum.com/transactionsdatabase.html
Chinese companies were active acquiring assets in Africa and South America in 2009 and 2010, respectively. In the last three months, CNOOC announced back-to-back JVs with Chesapeake for Eagle Ford/Niobrara shale plays. In 2011, are they trying to knock the North American doors????
Posted by Anitha Bharathi at 5:59 PM No comments:

Oil and Gas - Mergers and Acquisition Review: Over the last two weeks, four companies have been ...

Over the last two weeks, four companies have been put up for sale in Alberta

Over the last two weeks four companies have been put up for sale in Alberta with more than 15 MMBOE of gross proved reserves and 93,333 net acres. 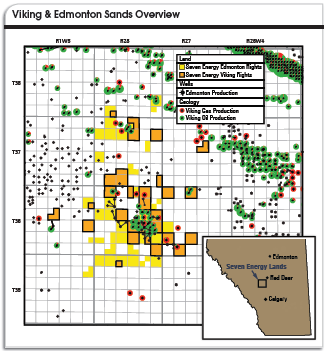 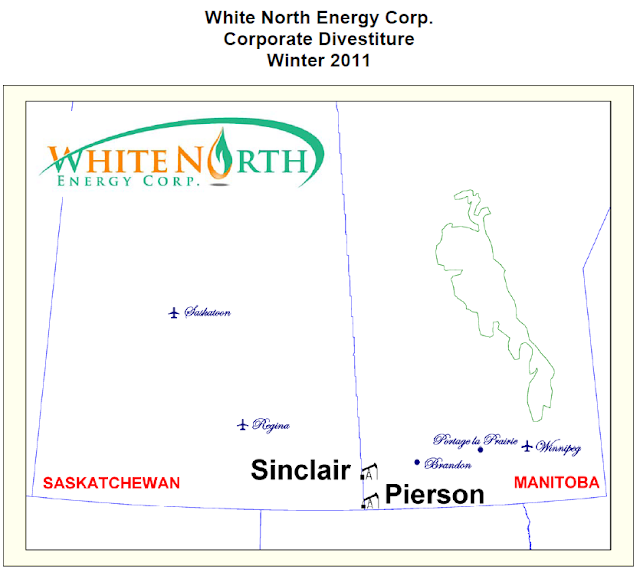 Sayer Energy Advisors has been engaged to sell the shares of White North Energy Corp, a private Alberta corporation which holds operated working interests in two producing light oil properties just west of Brandon, in the Sinclair and Pierson areas of southwestern Manitoba.

Highlights:
-- Sinclair area: White North holds high working interests, mainly 50%-100% but ranging from 12.5% to 100% in 13.5 sections of land on which it has partially developed some light oil reserves in the Bakken/Torquay formations.
-- Pierson areas: White North holds various interests, ranging from a GOR to a 50% working interest, in 2.25 sections of land. The company has drilled one oil well at Pierson (50% WI), which is currently producing approximately 3-4 BO/d (2 BO/d net to White North).
-- According to AJM reserve report, effective 31 Dec 2010, Total Gross Proved reserves - 671 MBO (PDP 36%, Oil 100%, NPV10 of $16 million); Gross Proved + Probable reserves – 1,117 MBO (Oil 100%, NPV10 of $31 million).
-- Recent production from the properties has averaged approximately 165-170 BO/d. Three recently-drilled wells which are coming on stream by March 1, 2011 are expected to add an additional 80-85 BO/d, for a total current net production capability of approximately 250 BO/d.
-- Identified a minimum of 19 drilling locations on its operated lands and three locations on its non-operated lands at Sinclair area.
Venturion Natural Resources put up for sale 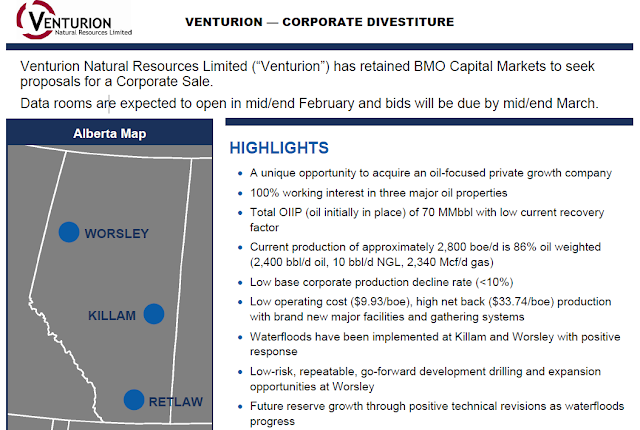 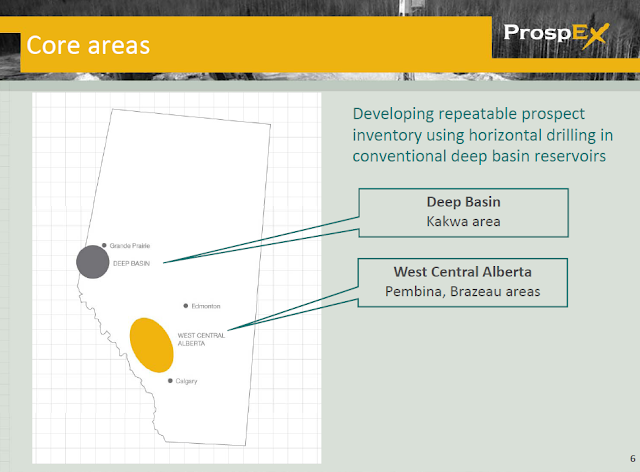 ProspEx Resources Ltd has initiated a process to identify, examine and consider a range of strategic alternatives available to the company with a view to enhancing shareholder value. Such strategic alternatives may include, among other alternatives, a sale of a material portion of the assets of the company, a sale of the company, either in one transaction or in a combination of transactions, a merger or other business combination, or a farm-in, farm-out or acquisition. The company has retained Cormark Securities Inc as its financial advisor to assist in this sale.

Total’s Q4 and Year End results were better than expected; plan to invest $20 billion in FY 2011

Total S.A. (Total) reported strong financial numbers for the financial year end 2010. The company attributed its results to the increase in oil prices. Total also planned to start up production at a number of new projects in Canada, Australia, China and Russia from mid 2011. 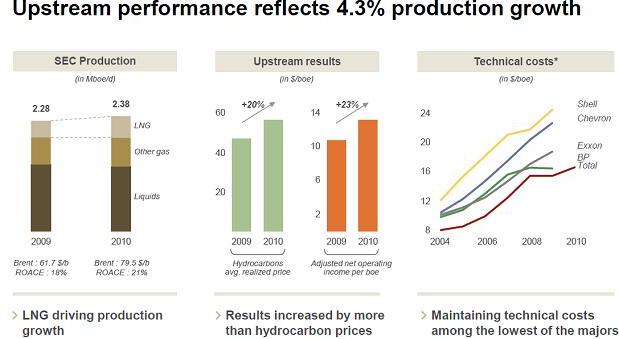 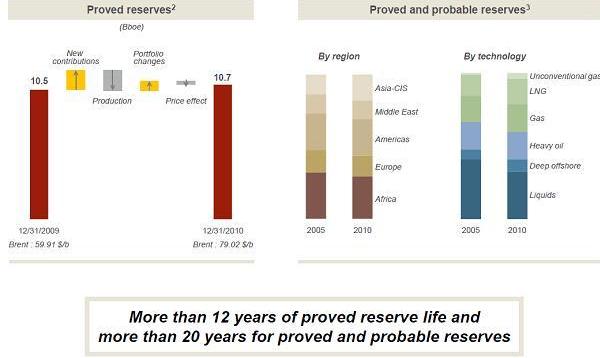 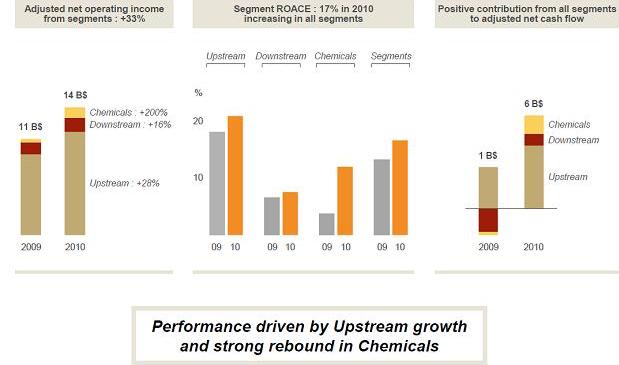 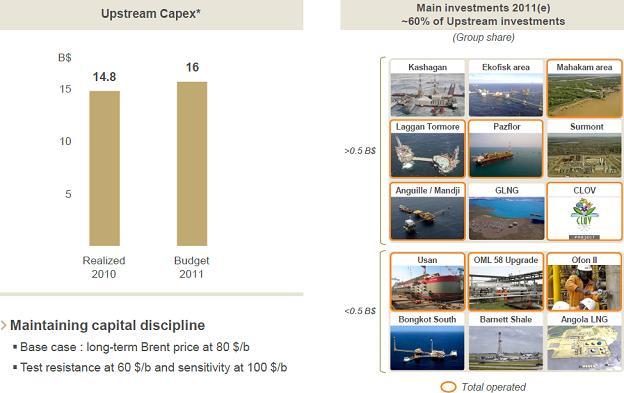 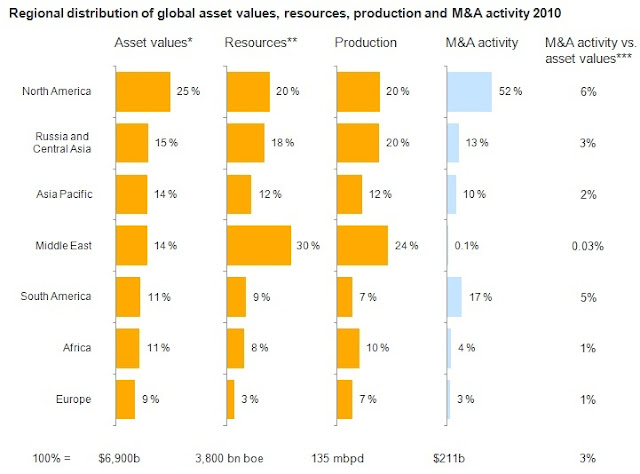 The value of global M&A activity compared to the value of all oil & gas assets worldwide amount to around 3%. This represents an average, annual portfolio transaction level for the world’s E&P companies.
North American M&A activity have accounted for 50-60% of global activity during the last years. In 2010 North American M&A activity is at about twice the share of the region’s share of global asset values in 2010. South America in 2010 also had a higher share of M&A activity compared to the region’s share of global asset values.
Other regions, Europe, Africa and Middle East, and Asia-Pacific in particular, have lower than average portfolio trading in 2010.
For more details look at http://www.derrickpetroleum.com/reports1.html
We have also recently published a report for E&P Business Development and New Ventures professionals working on deals globally. This report provides information on $93 billion of global oil and gas assets on the market.
The report provides details on ~500 opportunities:
·         Assets for sale
·         Corporate M&A opportunities
·         JV opportunities
·         Exploration farm-ins
You can view a sample copy of this report at http://www.derrickpetroleum.com/reports2.html
Posted by Rupesh Govindan at 10:43 AM No comments: