Posted by Kesav Gupta at 6:27 PM No comments: Links to this post

GMX RESOURCES INC., has reported hydrocarbon production of 6.0 Bcfe for the first quarter 2011, up 14% over the fourth quarter of 2010 and up 89% increase over the first quarter of 2010. The Company’s second quarter and full year 2011 guidance is 6.1 Bcfe with an expected range of 25.0-26.0 Bcfe, respectively, which represents an increase of 42% and 43%-49% in the second quarter and full year 2010.
GMX plan to deploy capital in high value opportunities. The company initiated Bakken and Niobrara acreage development plans by allocating capital across three basins to diversify commodity price and basin risk. 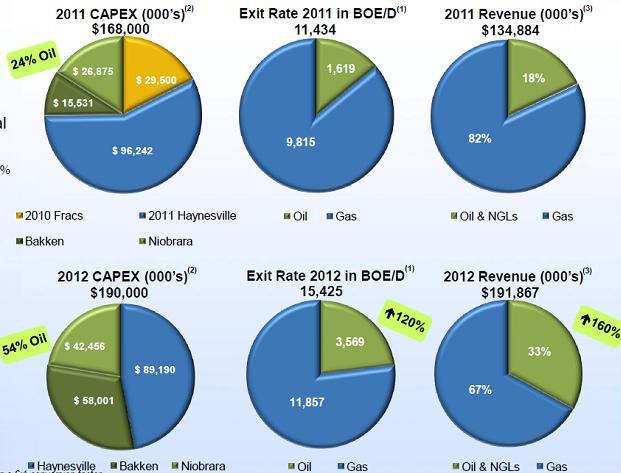 http://docsearch.derrickpetroleum.com/pageNav/view1/docId/11842-0000/Penn-Virginia-2011-IPAA-OGIS-Conference.html
Posted by Kesav Gupta at 6:23 PM No comments: Links to this post 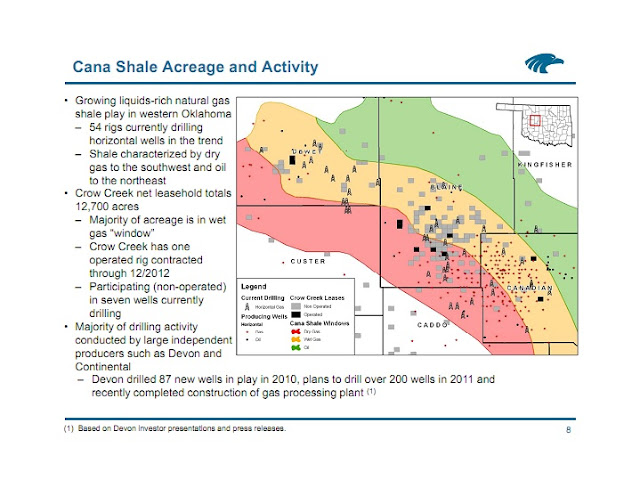 Highlights of the Crow Creek properties include the following: 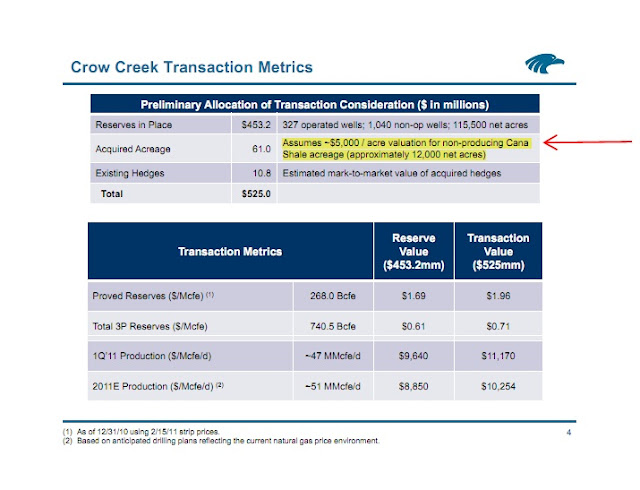 Cana Shale at ~$5,000/acre is booming up like senior shale gas producers!
The following slide from Cimarex gives the economics of Cana Shale well 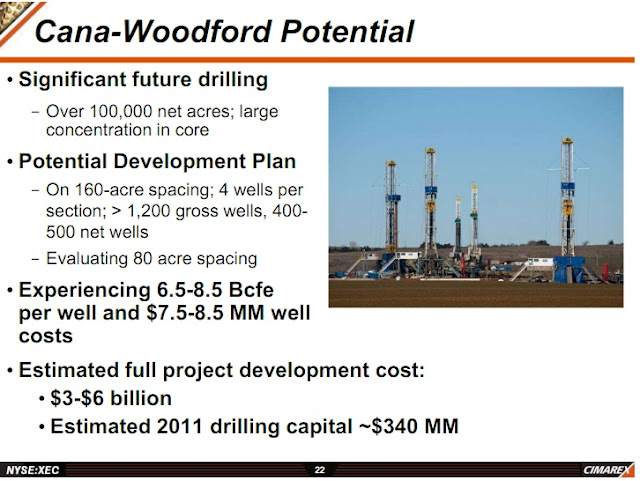 Source: Cimarex JP Morgan Conference- MAR 2011
Cana is the world’s deepest commercial horizontal shale play (11,500 – 14,500 ft TVD). The active operators of the play include Cimarex Energy, Continental Resources and Devon Energy. Cimarex Energy holding 100,000 net acres in Cana Shale play had drilled 112 gross wells in 2010, completing 86 of these. In 2011, Cimarex Energy plans to drill 100 gross wells equipping 8-9 rigs. Cimarex’ estimated 2011 drilling capital allocated for this play is $340 million. Devon drilled 87 new wells in play in 2010, and plans to drill over 200 wells in 2011.
With the industry players’ increasing interest in Cana Shale play and a new metric milestone set at $5,000/acre, Cana play is yet to magnetise many more oil and gas players. Cana Shale play - the new born shale is booming well!
The following snapshot shows the other significant deal in Cana Shale.

http://docsearch.derrickpetroleum.com/pageNav/view1/docId/11837-0000/Vermilion-2011-April-Investor-Relations-Presentation.html
Posted by Kesav Gupta at 6:15 PM No comments: Links to this post


North America emerged as the most active region for deal making, followed by FSU                 North America again led the way with 112 transactions totalling $21.2 billion, for 41% of global deal value. The Former Soviet Union ranked second with 12 deals totalling $15.4 billion. Asia saw $7.5 billion and Africa $6.8 billion. Deal making was relatively quiet elsewhere with announcements for Australia, Middle East, Europe (and the North Sea) and totalling less than $1 billion. Transaction value in South America dropped to $1.1 billion in Q1 from a record $23.5 billion in the prior quarter.


BP shifts to growth mode in 2011, did two major acquisition
National oil companies continued to play a prominent role, active in five of the eight largest transactions. BP was in the two biggest deals, leveraging its expertise to work bold deals with India’s Reliance and Russia’s Rosneft for offshore exploration and development stakes. In India BP took a 30% interest in 23 Reliance-operated offshore PSCs for $7.2 billion and formed a 50:50 joint venture with Reliance to source and market natural gas in India.


CNPC signed the largest shale gas JV till date
In the largest shale-gas JV to date, Chinese major CNPC committed $5.4 billion to a 50:50 venture with Encana to develop Encana’s Montney shale play and other assets in the Cutback Ridge area in western Alberta and eastern BC. That positions CNPC as a potential LNG exporter from Canada’s West Coast.
In other Canadian shale action, South African synfuels major Sasol doubled up on its $1.1 billion Montney JV with Talisman in late 2010, announcing a second $1.1 billion Montney JV with Talisman just 25 miles north of the first.


BHP made its first move into North American unconventional plays
In the US, BHP snatched up Chesapeake Energy’s Fayetteville shale assets for $4.7 billion in the Australian resource giant’s first move into North American unconventional plays. Until now BHP’s US focus has been almost entirely on the deepwater Gulf of Mexico. China’s CNOOC Ltd kicked off what could be a spate of Niobrara JVs with a $1.3 billion deal involving Chesapeake, at $4,700/acre. Korea’s KNOC closed out the quarter with a $1.5 billion Texas Eagle Ford JV with Anadarko for liquids-rich acreage, setting a new benchmark of ~$13,000/acre for that play. In corporate-level M&A, there was a continued brisk pace of equity sales or swaps. Abu Dhabi’s state-owned International Petroleum Investment Co bought an added 53% in Spain’s CEPSA from Total for $5 billion. Undeterred by Russian politics, Total moved to buy a 12% stake in Yamal LNG operator Novatek for $4.1 billion, with an option to go to 19% within 36 months. Total simultaneously announced the acquisition of a 20% stake in the Yamal LNG project, which targets first output in 2016 and a potential 15 MMmt/yr of LNG. In other Russian deals, ConocoPhillips sold its remaining $1.2 billion equity stake in LUKoil in an ongoing restructuring effort.

Oil or gas?
Gas-related transactions in Q1 totaled $26.3 billion for half of transaction value. Oil deals were $22.6 billion for 43%. Deals with a mix of oil and gas were only 6%, their lowest share since 2009. This may reflect company efforts to rebalance portfolios from one commodity to the other. 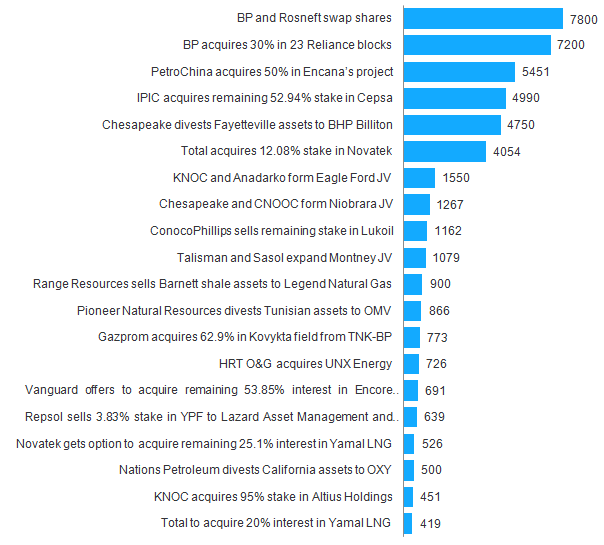 For more on 2010 M&A trends, look at Global E&P Transaction Review 2010
Posted by Rupesh Govindan at 12:55 PM No comments: Links to this post