Newfield Exploration Company signed two separate agreements to acquire assets in the Uinta Basin from Harvest Natural Resources and an unnamed private company for an aggregate $308 million. The transactions will add approximately 70,000 net acres to the company’s acreage position in the Uinta Basin. The acreage is largely undeveloped and located adjacent and north of the company’s largest oil asset – the Monument Butte field. Newfield said last month it expects the Monument Butte field to grow more than 15% this year and domestic oil volumes to rise by about half. Harvest Natural will receive $215 million for the Antelope project which consists of approximately 69,000 gross acres (47,600 net acres). Harvest owned a working interest of approximately 70% in the Uinta assets. 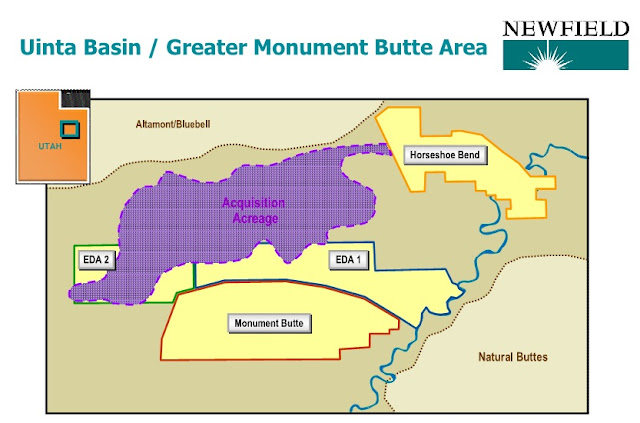 Newfield Exploration 2011 strategy moves to oil plays!!
At the end of last year, Newfield agreed with EOG Resources to acquire gas rich Marcellus assets. However, it was subsequently cancelled for mysterious reasons. Now it becomes clear with their 2011 strategy…
Nearly 60% of Newfield's 2010 investment was focused on oil and "liquids rich" gas assets within the company's portfolio. However, Newfield’s 2011 budget of approximately $1.7 billion will be spent 100% on oil/liquids rich gas plays. 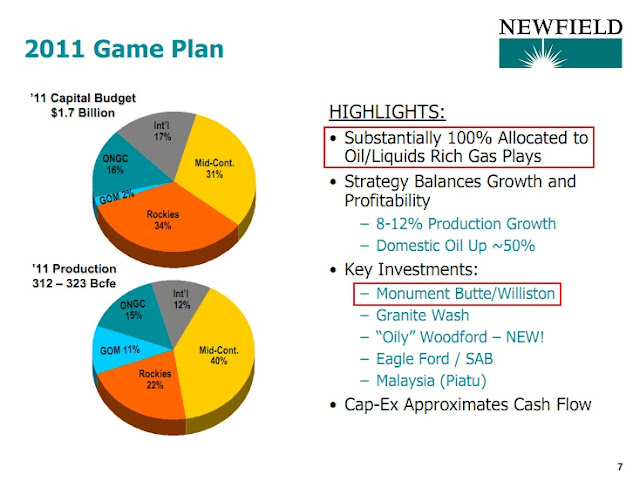 Posted by Anitha Bharathi at 6:52 PM No comments: Links to this post

Eagle Ford Shale - the next big thing on the global exploitation map!!!!

Eagleford shale play extends about 400 miles across South Texas in a 50-mile-wide band, from the Mexican border, below San Antanio and up into East Texas. Some of the world’s biggest oil companies – including Shell, BP, Statoil and CNOOC – recently have entered the Eagle Ford and are helping to put it on the global energy map with aggressive exploration drilling planned for coming years. In 2010 in the Eagle ford, about 1,018 drilling permits were issued through November, which means that this area is definitely the next big thing to look out for. Not only the drilling permits issued in number increased but also the number of rigs have increased in number. 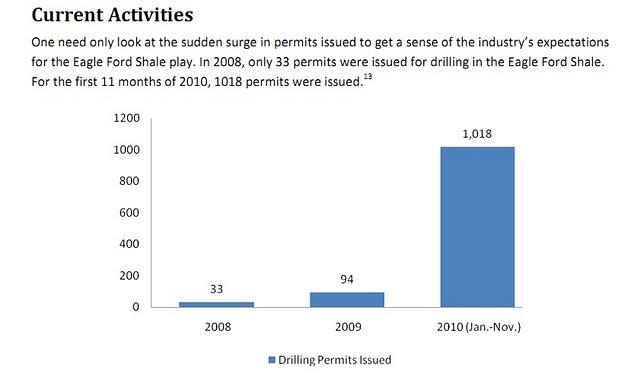 EOG, in 2010 averaged seven rigs in the Eagle Ford and drilled 110 wells. This year, it expects to have 14 rigs and drill 256 wells. Chesapeake, the largest leaseholder with 625,000 acres, also expects to double the dozen rigs it has working in the area. Petrohawk Energy also expects to spend more than twice as much as it did in the region in 2010. And ConocoPhillips, another major leaseholder, just leaped from seven to 11 rigs in the region.
Why Eagle Ford ?

What makes this shale play different is that it produces oil, condensate, gas and finally drier gas as drilling proceeds down dip. The carbonate content (up to 70% calcite) of the shale makes it very brittle and easily fractured during stimulation treatments, resulting in impressive production figures of both oil and gas.
What are others thinking? 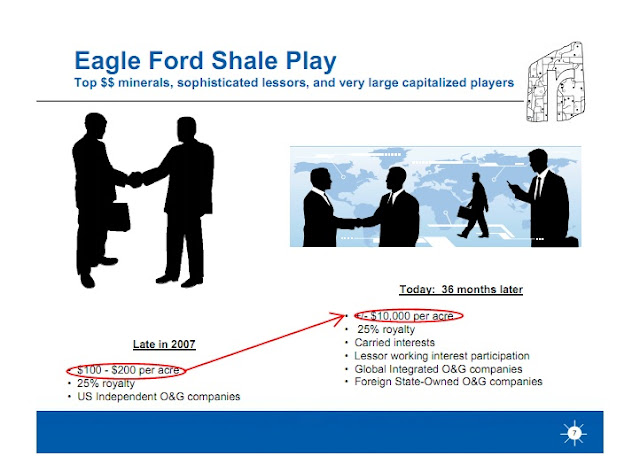 There has been a huge increase in the demand for this acreage , from about $100 to $200 per acre in 2007 to more than $10,000 per acre at present, which signifies that the companies are confident to reap huge profits from this area! 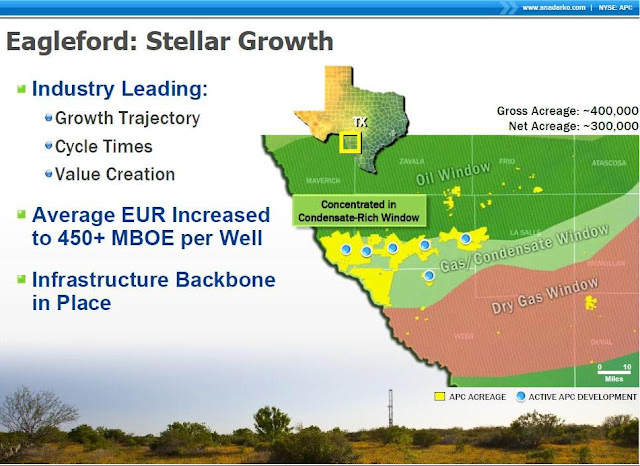 
What makes Eagle ford shale play the most sort after thing these days is its wide expanse and the ability to drill essentially “risk free”oil wells in a time when bankers are reluctant to lend any oil company money for exploratory drilling.  With the vast amount of infill drilling that will occur as the play is exploited we may see more than a couple of decades worth of production.
Posted by Sanjay Samuel at 6:44 PM 1 comment: Links to this post

http://docsearch.derrickpetroleum.com/pageNav/view1/docId/11226-0000/InterOil_Corporation_2011_Presentation_To_The_Morgan_Stanley_Gas_Conference.html
Posted by Kesav Gupta at 5:59 PM No comments: Links to this post

http://docsearch.derrickpetroleum.com/pageNav/view1/docId/11268-0000/ATP_2011_Northeast_Investor_Presentation.html
Posted by Kesav Gupta at 5:57 PM No comments: Links to this post

http://docsearch.derrickpetroleum.com/pageNav/view1/docId/11255-0000/Cairn_Preliminary_Results_March_2011_Investor_PPT.html
Posted by Kesav Gupta at 5:56 PM No comments: Links to this post

http://docsearch.derrickpetroleum.com/pageNav/view1/docId/11239-0000/Shell_2011_Analyst_webcast_presentation_slides.html
Posted by Kesav Gupta at 5:53 PM No comments: Links to this post

CNOOC’s 2010 net production reached 328.8 mmboe, reached 2010 production guidance of 327-329 mmboe. The production growth is mainly attributable to production from new fields brought on stream since 2009, outstanding performance of the producing fields and the production contribution from newly acquired projects. In 2010, the Company’s reserve replacement ratio amounted to 202%.

CNOOC plan to invest US $8.77 billion in 2011, in which US$5.05 billion allocated for development projects. 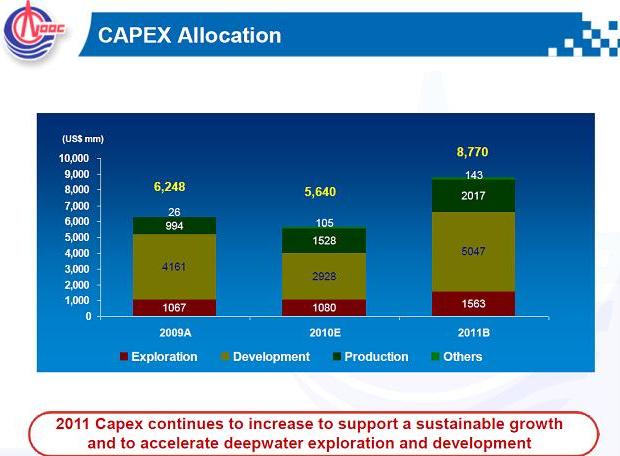 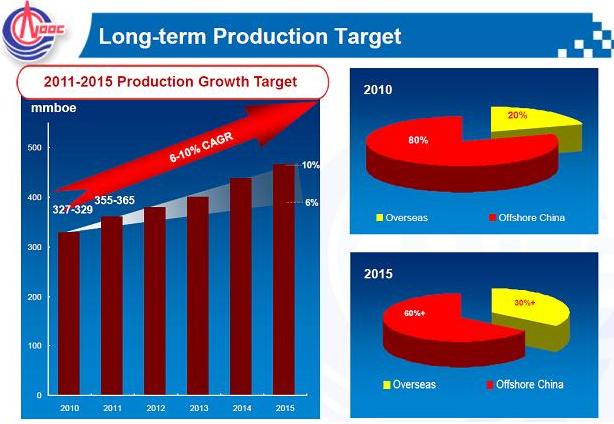 Posted by Kesav Gupta at 5:25 PM No comments: Links to this post