Chinese/Asian NOCs acquisitions in 2010
Chinese/Asian NOCs were eager buyers in 2010, accounting for 19% of global activity, or $40bn, having grown steadily from 1% since 2007.  Key region was South America  with 4 of the top 5 deals, including Sinopec’s JV with Repsol, Brazil and CNOOC’s JV with Bridas for Pan American Energy. 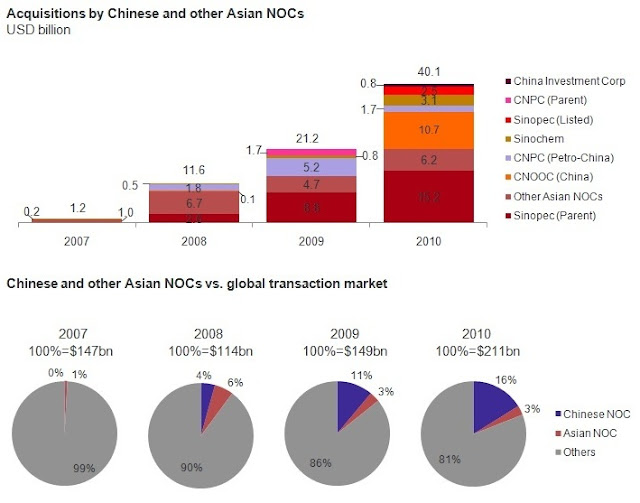 In 2010, Chinese NOCs (Sinopec, CNOOC, CNPC, Sinochem and China Investment Corp) did acquisitions amounting to $34bn, Other Asian NOCs (KNOC & PTTEP) did acquisitions amounting to  $6bn.
Four of the top five deals by Chinese NOCs were in South America. Clearly this was their focus region for growth in 2010:
Apart from South America, the Chinese also acquired assets in Canada, US, Angola, Australia, Uganda, Indonesia, and Colombia. 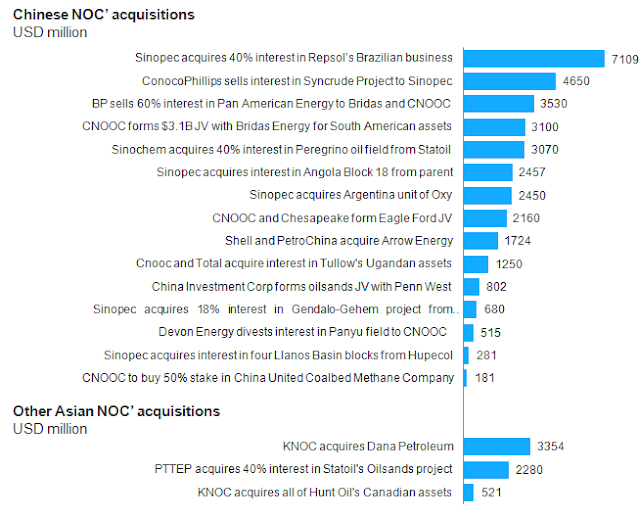 Chinese have restricted to JVs in US in 2010
Eagleford JV with Chesapeake was the only deal by Chinese NOCs in US.

So far Chinese have restricted to JVs and small acquisitions in US, will they be doing a corporate acquisition in 2011?
For more details look at http://www.derrickpetroleum.com/reports1.html