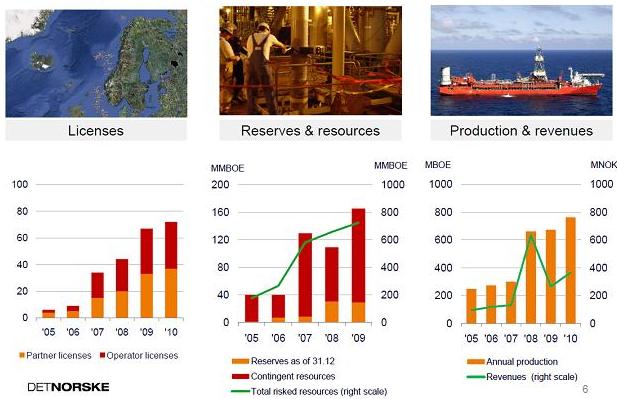 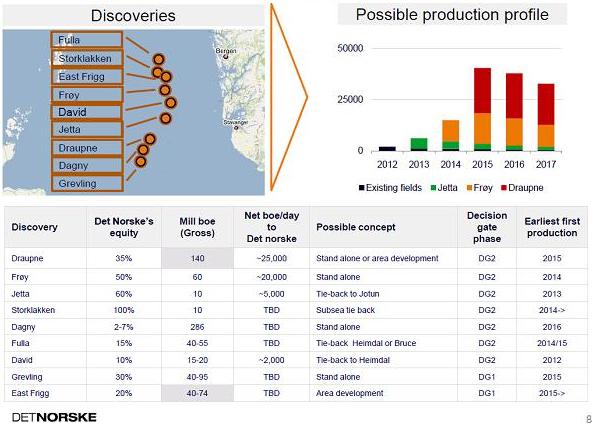 -- Developments in the pipeline 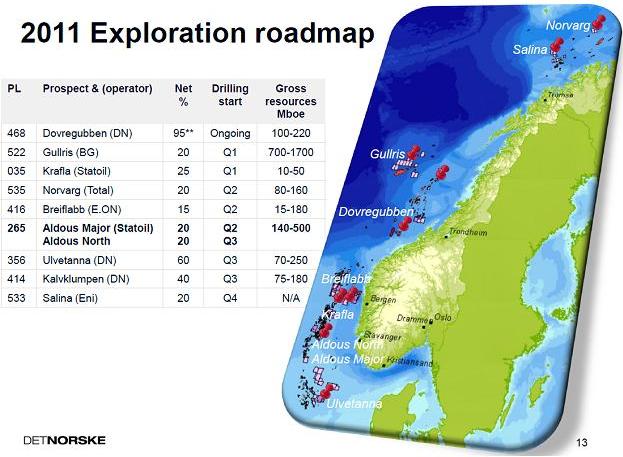 -- Expected post-tax exploration spending in 2011 amounts to approximately NOK 400 million ($71.4 million)
Posted by Kesav Gupta at 6:56 PM No comments: Links to this post

More to be raised to fund APLNG JV 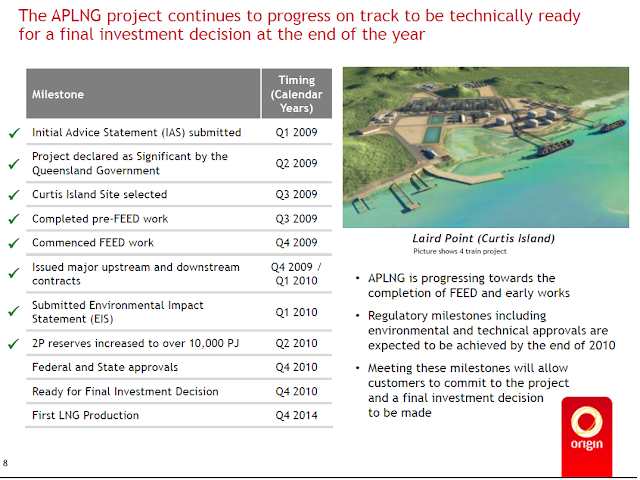 Origin is assessing a range of funding options for the joint venture, which includes tapping debt markets ,  conducting another equity raising and selling up to 7.5% interest in APLNG.

Origin and Conoco Phillips have agreed to sell LNG cargoes and 15% of the project to China's Sinopec, reducing their holdings to 42.5% each. Talks with other potential LNG buyers continue and that Origin expects to end up with more than 35% of the project's equity, but probably closer to 40%. 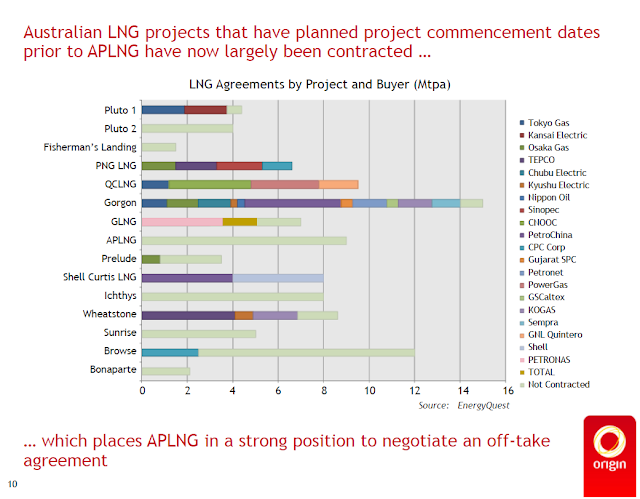 Origin will continue to have Australia's strongest balance sheets
Origin already had one of Australia's strongest balance sheets after it sold a half share of its coal seam gas assets in Queensland state to U.S. oil major ConocoPhillips (COP) in 2007 for up to US$8 billion. By launching the raising early in 2011, Origin has been able to reinstate full year underlying profit guidance of around 15% growth, having lowered it last month to 10-15%, because paying off debt will reduce its interest bill.

Posted by Rupesh Govindan at 6:54 PM No comments: Links to this post

Brazil's quest to remake itself into a global oil superpower is gaining momentum.

BG is to invest $30 billion in Brazil in the next decade, an increase from the $5 billion it has invested since 1994. BG has stakes in some of Brazil’s largest oil discoveries, including the 6.5 billion barrel Lula field, formerly known as Tupi. BG plans to produce 550,000 barrels a day in Brazil by 2020, or a third of the company’s total production by the end of the decade. Brazil is preparing to auction exploration areas in the first half of this year as the country plans to double oil production to 5 million barrels a day by 2020. Brazil also plans to auction exploration areas in the so-called pre-salt region in deep waters of the Atlantic where the Lula field is located. 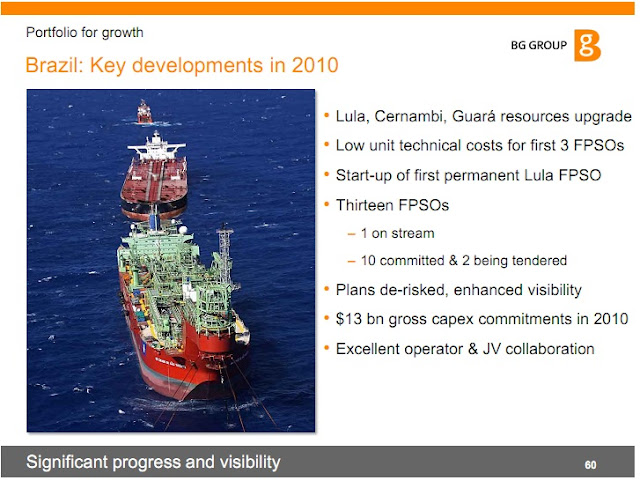 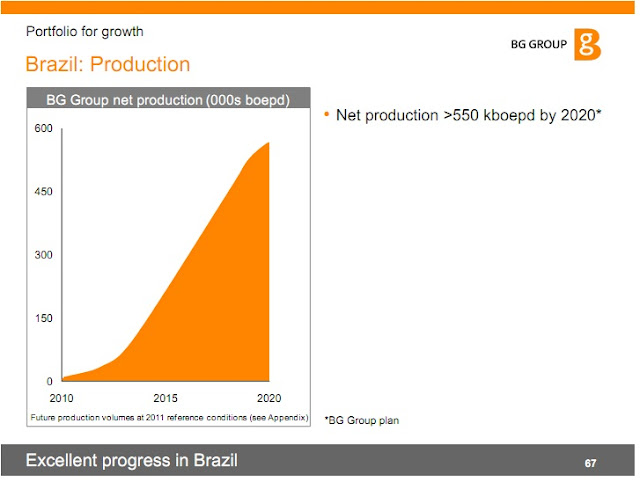 Portugal's Galp Energia will also invest $4.87 billion through 2015 as it ramps up spending to pay for the company's share of developing massive oil fields including the Lula and Cernambi fields in Brazil's pre-salt region. Galp Energia is considering the sale of a 30% stake in its Brazilian assets to finance the company's investment plans. To know more read here: http://mergersandacquisitionreviewcom.blogspot.com/2011/03/galp-to-sell-42bn-stake-opportunity-for.html
Brazil- World’s next oil bank
A consortium of Petrobras, BG and Petrogal discovered the Tupi field in 2007, which contains substantial reserves that occur in a pre-salt zone 18,000 feet below the ocean surface under a thick layer of salt. Following Tupi, numerous additional pre-salt finds were announced in the Santos Basin, such as Iracema, Carioca, Iara, Libra, Franco and Guara. Additional pre-salt discoveries were also announced in the Campos and Espirito Santo Basins.
These significant discoveries have ignited interests among certain O&G companies, which made Brazil to see many foreigners like Maersk, Sinopec and BP stepping deep into the discoveries in 2010. Also, with the market rumors of Sonangol and certain Chinese companies interested in taking a stake in Galp Energia, this year will again see many more foreigners exploiting the Brazlian reserves. 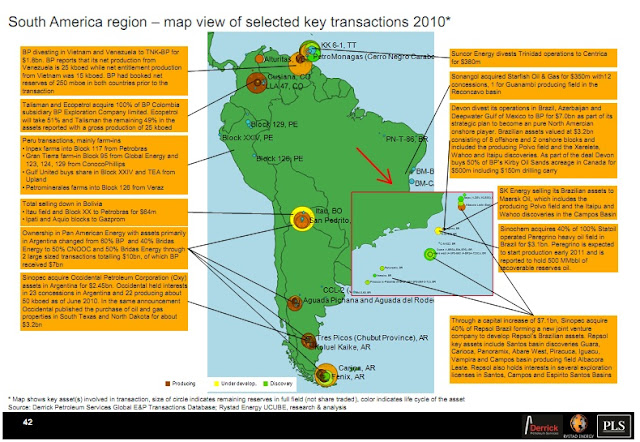 In 2009, Brazil’s liquids production surpassed its liquids consumption. In the January 2011Short-Term Energy Outlook, EIA projects that Brazil will continue to be a net exporter through the end of 2012. As pre-salt discoveries boost Brazilian production in the medium and long term, crude oil exports should steadily increase. 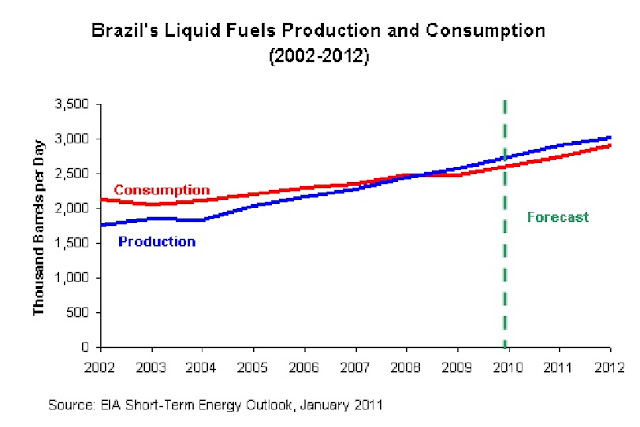 Posted by Anitha Bharathi at 6:01 PM No comments: Links to this post