PDC Energy expects production growth of 19% in 2011, as the company moves to accelerate development of oil and liquid assets in the onshore area of the United States. The company plan to spend $233 million in 2011 to develop its various properties in the United States. The company will put 75% of this capital into oil and liquid plays, including the Niobrara Shale and the Permian Basin.
PDC Energy expects to produce between 2.4 million and 2.5 million barrels of oil and other liquids in 2011, up 34% from 2010. The following map illustrates the company’s planned operational activities in 2011. 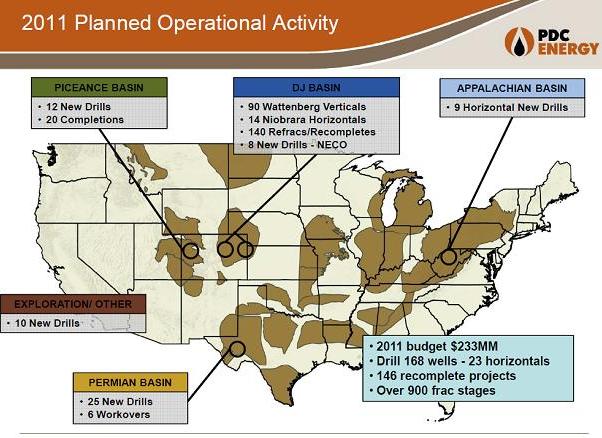 
Try this free document search tool
Posted by Kesav Gupta at 7:04 PM No comments: Links to this post

Oil resource plays- Causing a stir in the industry!! Back to back crown land sales in Canada hit ~C$110 million

Alberta- April 2011 sale
Alberta kicked off its first land sale of fiscal 2011/2012 on 6th April, 2011 with a C$115.8 million land sale, fuelled once again by licences south of Grande Prairie and also several parcels near Lethbridge, which appears to be a continued chase for Exshaw/Alberta Bakken oil. The sale featured 233,431 hectares exchanging hands at an average of C$496.13 per hectare. Highlights included a sale high bonus bid of C$17.9 million by Scott Land & Lease Ltd for three tracts and several parcels at 61-24W5 and 60-24W5. The broker paid an average of C$8,735 per hectare (~C$3,500/acre) for the 2,048-hectare parcel, also a land sale high. 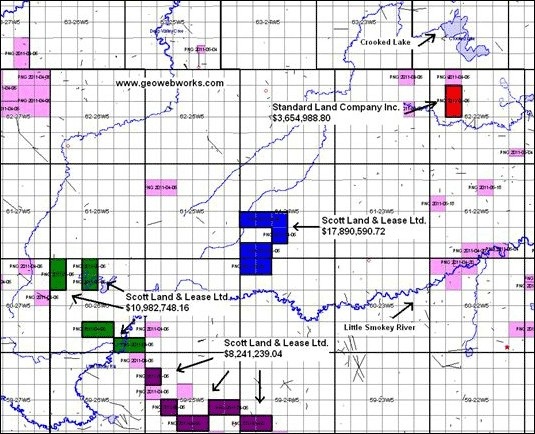 Saskatchewan- April 2011 sale
Heightened interest in the southwest's Shaunavon oil play has significantly boosted revenue from the latest sale of Crown petroleum and natural gas rights. The Shaunavon play accounted for more than half the total in April's sale, which brought in C$109 million in revenue for the province. Land sale revenues for the 2011 calendar year stand at C$152 million after two sales. The latest sale was the third best on record for an April sale. It also marked the seventh time in the last three years that a single land sale has topped C$100 million. The February-2011 sale of drilling and exploration rights raised C$43.4 million for the provincial coffers.

The highest price for a single parcel was C$7.3 million, paid by Husky Oil Operations Ltd. for a 2,331-hectare exploration licence southwest of Estevan along the Canada-United States border. The highest price on a per-hectare basis was C$10,214 (~C$4,000/acre). Villanova Oil Corp bid C$320,000 for a 31-hectare lease parcel near Carnduff.

"This was a great sale, based on both the quantity and the quality of the bids we received," Energy and Resources Minister Bill Boyd said. "We had the usual strong interest in the Bakken play, but our rich oil resources in the southwest are obviously causing a stir in the industry.
Try this free document search tool


Unusually high acreage metrics in Canada!!
"Land sales are a key barometer of future activity in the industry, and based on what we've seen over the last 15 months from our sales, the forecast is very bright indeed for increased investment by the industry", said Bill Boyd.
Land sale numbers tend to move higher in tandem with oil prices. These two recent crown land sales in Canada saw the acreage metrics running at C$3,500/acre and C$4,000/acre- relatively high for new land parcels! With the oil prices rising gradually, the oil resources plays like Bakken and Shaunavon are attracting flocks of companies. In particular, Saskatchewan is expecting Asians to invest in these oil rich plays. When Chinese were keen to make an entry into US shale plays in 2010, they wont' hesitate to venture into Canadian shales.
The following snapshot shows the 2010 M&A activity in Canada: 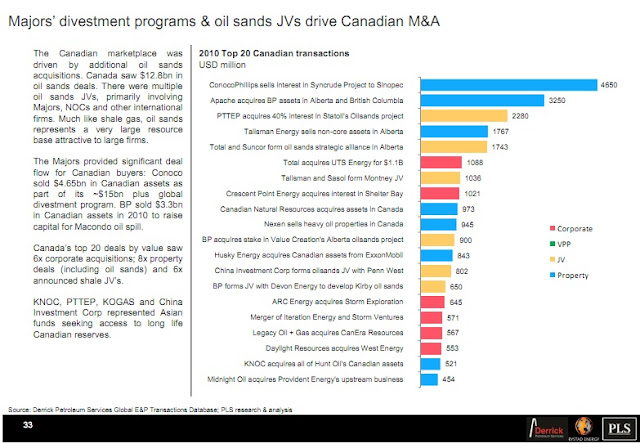 http://docsearch.derrickpetroleum.com/files/11973/Compton%20Petroleum%202011%20RBS%20Conference.pdf
Posted by Kesav Gupta at 6:40 PM No comments: Links to this post

http://docsearch.derrickpetroleum.com/files/11952/Ivanhoe%202011%20March%20Corporate%20Presentation.pdf
Posted by Kesav Gupta at 6:33 PM No comments: Links to this post

Giants in the Eastern Mediterranean - Oil Exploration in the Region 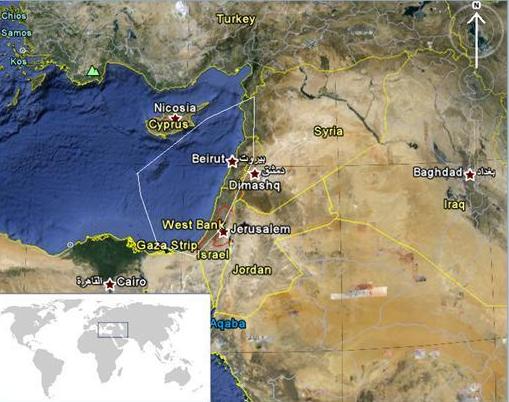 Figure 1: Map of Eastern Mediterranean with the approximate extent of the Levantine Basin (white polygon). Modified from Google Earth.

The discoveries of some giant hydrocarbon accumulations offshore Israel in the form of the Tamar, Leviathan and the smaller Dalit gas fields have caused a lot of buzz about other giants that may be hiding in the sub-surface in the Levantine Basin. The three discoveries are estimated to contain ~ 25 tcf of gas, with the Leviathan discovery alone estimated to hold 16 Tcf. The Leviathan discovery was the largest gas find of the decade. The giant Tamar field, estimated to hold 8.4 tcf, was discovered in 2009 before the Leviathan field. The well at Leviathan is currently still being drilled to evaluate the oil potential of deeper layers. The Tamar field could meet Israeli demand for 20 – 30 years says Amit Mor, chief executive of EcoEnergy, a local environment, energy and infrastructure consultancy. With Tamar satisfying Israeli demand, Leviathan gas will be looking to finds its way to international markets. However, this is an extremely challenging prospect given the volatile nature of geo-politics in the region.
NEW FOUND INTEREST IN THE AREA

The discoveries off Israel have changed the exploratory potential of the region dramatically. Local governments realize they have acreage worth exploring and are making it worth the while of international companies to explore off their waters. Syria had planned two previous licencing rounds, in 2008 and 2007. However, the 2008 round was called off due to lack of success in the Egyptian and Syrian rounds, together with low oil and gas prices, and the global credit crunch. In the 2007 round only the Dubai based Dove Energy had expressed interest, but no deal was finalized due to the high costs involved. These licensing rounds were planned and executed prior to the gigantic discoveries off Israel, and it is a safe bet that the current licensing round that Syria is planning to throw up will have a lot of companies vying for these blocks. 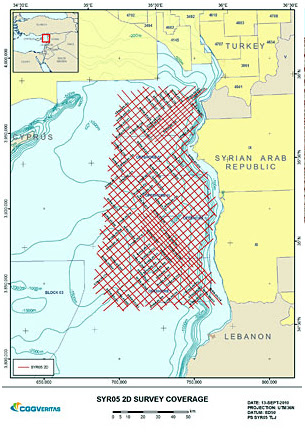 Lebanon has also announced that it will offer its debut licensing round later this year together with 2D and 3D seismic datasets they have shot off their waters (Figure 2). Cyprus has long been in dispute with its larger neighbor Turkey about exploration rights off its waters. In its first licensing round, only one block was taken up by Noble Energy (Block 12), the same operator that discovered the Tamar and Leviathan gas fields. However, buoyed by the recent successes in neighboring Israeli waters, Cyprus plans to throw up 12 blocks in its new licensing round later in 2011.


JORDAN TAKING THE UNCONVENTIONAL ROUTE
On the other hand, the other Eastern Mediterranean country, Jordan, has been busy becoming the first Middle Eastern country to commercialize its oil shale resources. The Natural Resources Authority of Jordan estimates that the country has more than 40 billion tonnes of oil shale. It recently awarded a concession to Jordan Energy and Mining of the UK through its wholly owned subsidiary Karak International Oil. It has also awarded concessions to Shell and the Estonian company Eesti Energia. Shell plans to drill on its 22,000 sq km concession with an initial spending of ~ $500 million ramped up to ~ $18 billion over the next 18 years. It would seem to be a matter of time before Jordan also hands out oil concessions to explore off its waters.


STRAINED GEOPOLITICS NOT GOOD FOR BUSINESS
Since a lot of Israel’s neighbours are hostile towards Israel, it makes sense that the majors would give Israel a pass and get access to the prospective Levantine Basin through neighboring countries such as Cyprus and Lebanon, and leave exploration in Israel to companies like Noble Energy and their like. This situation is highly prospective for smaller and mid size companies trying to get access to a ‘hot’ basin. However, the going would be complex given the many factors in play in the region. Maritime borders are on the most part poorly defined which could give rise to border disputes and delays. The Lebanese Prime Minister has claimed that the giant Leviathan and Tamar fields are in Lebanese waters, and subsequently Israel has retorted that it would use force to protect its assets. Clearly there is tension in the area. Also, deep water drilling and setting up development infrastructure would have high costs given the fact that there is not much infrastructure in place for development of fields. Exporting the gas would also throw up its own set of challenges in terms of putting in infrastructure, for e.g., pipelines to transport the gas, or LNG exporting plants.

Table 1: Number of companies with plans to drill in the Eastern Mediterranean in 2011.
Source -Derrick Petroleum- Planned Exploration Wells Database.


KEEPING TRACK OF EXPLORATION
The Derrick Petroleum Exploration Database keeps tracks of new wells being planned and past wells drilled (and whether they were dry or discoveries). From this database, currently announced plans to drill in the Eastern Mediterranean region, amount to a total of 10 exploratory wells in 2011. Also, from this database, the companies currently with plans to drill in the region in 2011 are Adira Energy (1 in Israel), Geoglobal Resources (1 in Israel), Noble Energy (2 in Israel, 1 in Cyprus), Melrose Resources (1 in Syria) and Kulzyk Resources (2 in Syria). It is a safe bet that this number would increase, given the international spotlight on this region after some finds of the decade, and after new licenses are picked up by companies. The database also keeps track of new companies planning to drill on a daily basis and is an extremely useful tool to keep track of exploratory drilling.

WHAT ABOUT THE PETROLEUM SYSTEM?
The Leviathan, Tamar and the Dalit fields have their hydrocarbons in Lower Miocene – Oligocene sands with reservoir thickness in Tamar between 33m to 140m. The sands have also been reported to have excellent porosity and permeability and high tested flow rates. Water depths range from 1000m to about 1654m at the Leviathan discovery. The variety in tectonic styles and depositional patterns in the Levantine basin provides favorable trapping conditions for hydrocarbons. Potential structural traps are associated with extensional rift structures and the contractional Syrian Arc folds. Stratigraphic traps are associated with Triassic-Middle Jurassic shallow-marine, carbonate and siliciclastic reservoirs and Cretaceous and Tertiary deepwater turbidite systems. Gas discoveries in the Lower Miocene to Oligocene sequences, shallow gas discoveries in Pliocene sands and high-grade oil shows found in the Mesozoic section validate the presence of source rocks and appropriate conditions for hydrocarbon generation in both biogenic and thermogenic petroleum systems. According to the Geological Society of Israel, the size, depth and trapping potential of the Levant Basin supports the conclusions that large quantities of hydrocarbons can be found offshore Israel, and in the Levant basin at large.
Posted by Sanjay Samuel at 2:16 PM No comments: Links to this post