Dominion Petroleum Limited has entered into an Execution Agreement to acquire a 75% operated working interest in the production sharing contract for Blocks 4, 5, 6 and 7 of Area 4 Offshore Malta from Phoenicia Energy Company Limited, a wholly owned subsidiary of Mediterranean Oil & Gas plc (MOG), pursuant to a draft farm-in agreement. Closing of the acquisition is conditional upon Maltese government approvals and completion of the Placing of the subscription shares. 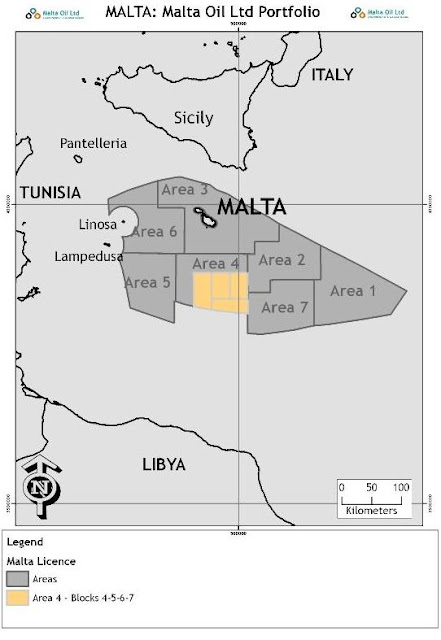 Under the terms of the farm-in agreement, Dominion will meet certain exploration costs up to a cap of US$1,260,000, on behalf of MOG in relation to its remaining 15% working interest. Dominion will also compensate MOG for a total amount of US$900,000 in certain historic costs, through the non-refundable sum of US$225,000 and a closing sum of US$675,000 under the farm-in agreement. The exploration costs to be paid by Dominion on behalf of MOG is US$0.189 million. The aggregate deal value including the historic costs is US$1.089 million.
The Maltese PSC is situated to the north of Libya, covering an area of 5,715 sq km in Maltese waters. It includes both the Cretaceous rift potential of the Melita-Median Graben and the confirmed Eocene carbonate play of North Africa. According to RPS Energy's report on Area 4, effective March 2006, there are number of prospects identified within the area, of particular interest is the Tarxien prospect, a lower Eocene carbonate build up. The reporat also estimated the prospect to have a gross recoverable un-risked P50 prospective oil resource of 115 MMbbl with an 18% chance of success.

For more presentations on "Dominion", use our oil and gas document library:

Powered by Derrick Petroleum Services
The work obligations of the current period of the Maltese PSC comprise the acquisition of 1,000 sq km of 3D seismic data and the drilling of one exploration well. The first exploration period is valid until January 2013 and there is a minimum spend requirement of US$5 million. The company anticipates that the 3D seismic survey will cost between approximately US$8 million and US$10 million gross to undertake, which will satisfy the minimum spend requirement. The results of the seismic survey will enable the JV partners to define and evaluate the Tarxien prospect and other identified opportunities within Area 4, prior to any drilling decision. The long-offset 3D will also allow for a clearer analysis of the pre-tertiary rift-fill below the Eocene carbonates and potential Cretaceous targets.
Post transaction the ownership structure in the blocks will be: Dominion Petroleum (75%, Operator), MOG (15%) and Leni Gas & Oil (10%).
SOURCE DOCUMENTS:
Malta-Dominion Farm-in Announcement

View more documents from derrick_anitha
Posted by Kesav Gupta at 6:26 PM No comments:

Husky Energy Inc, Canada’s No. 3 integrated oil company, said it will raise $1.2-billion though public and private share offerings in order to finance its production growth plans. Husky, said it will sell 36.9 million common shares priced at $27.05 each, to a group of underwriters led by RBC Capital Markets, Goldman Sachs Canada, HSBC Securities (Canada) and J.P. Morgan Securities. The bought deal is expected to raise about $1-billion. 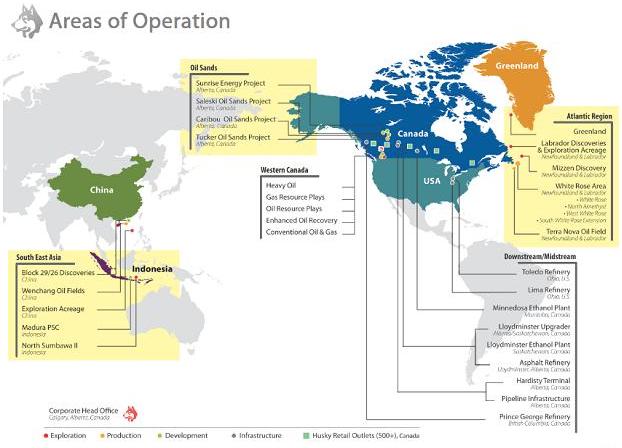 Husky announced a 2011 capital budget of CAD 4.9 billion (US$ 5.02 billion), a 23% increase from 2010. Excluding the acquisition, the bulk of the spending increases will go toward the Sunrise project and Southeast Asia, with reductions in midstream and downstream spending. With the larger capital budget and contributions from the recent acquisitions, Husky expects 2011 total production growth to be slightly above 4%.

Most of the gains will come from an increase in natural gas production of 14%, while expected 5% growth in heavy oil and bitumen volumes should offset a 3% decline in light and medium crude production. To supplement the funding of the capital plan, Husky also announced plans for a CAD 1 billion (US$ 1.02 billion) equity issuance. Current shareholders will have the option of receiving dividend payments in shares instead of cash.


The retention of the Southeast Asian assets is probably a positive step, given the outlook for increased gas demand in the region and the potential for exploration success. Also, moving forward with Sunrise should provide significant growth in oil volumes. However, while the company plans to achieve its previous production growth target of 3%-5% per year, short-term gains rely largely on natural gas acquisitions.

For more presentations on "Husky Energy", use our oil and gas document library:

Powered by Derrick Petroleum Services
The move toward natural gas stands in contrast to Husky's peers, which are shifting investment toward oil projects and away from natural gas. Also, the company's natural gas production is coming from Western Canada, a region that falls higher on the cost curve and faces intense competition from U.S. shale plays. As a result, returns may be challenged despite the growth in production.
Husky said the cash will go to boost exploration and development of its properties in Western Canada’s oil sands, offshore Newfoundland and Southeast Asia. It also said that, with the additional capital, it expects production to grow at the high end of its 3-5% annual target though 2015.
Husky Energy’s Exploration Portfolio:

View more presentations from derrick_anitha
Posted by Kesav Gupta at 5:55 PM No comments: