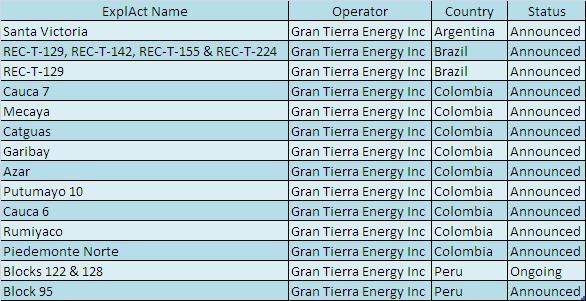 Source: Derrick Petroleum E&P Transactions Database
Including the Petrolifera assets, Gran Tierra sees average production of between 17,500 and 19,000 barrels of oil equivalent per day, net after royalty. In late December, the company had forecast production of 16,000 to 18,000 boepd net after royalty. The company, which has assets in Colombia, Argentina and Peru, raised its capital expenditure for the year by about 19% to $355 million.
In Colombia, Gran Tierra Energy intends to delineate a potential gas production platform in the Lower Magdalena basin, prepare for 2012 exploration drilling in Peru, and reverse production declines in Argentina where both oil and gas prices have consistently been rising.
Colombia
Gran Tierra Energy plans to spend approximately $14 million on drilling in Colombia, including one exploration well and one delineation well with the intention of evaluating a potential gas production platform in the Lower Magdalena Basin.
Peru
In 2011, Gran Tierra Energy intends to spend approximately $13 million in preparation for drilling in early 2012.
Argentina
Capital spending in Argentina will initially focus on reversing production declines on properties in the Neuquen Basin. Gran Tierra Energy plans to spend $14 million on drilling and completions in Argentina.
Try this free document search tool
Posted by Kesav Gupta at 6:29 PM No comments: Links to this post

Imperial Oil Resources has initiated a process to divest certain of its assets in the Medicine Hat area (Redcliff-Schuler) in Alberta, and has retained Scotia Waterous as its exclusive financial advisor to assist in this process. The Redcliff-Schuler offering represents an opportunity to buy conventional, long-life shallow gas production. 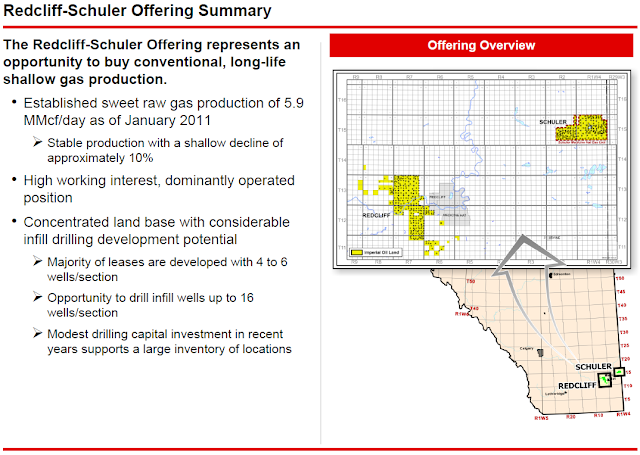 Offering Highlights:
Redcliff area overview:
-- 88% working interest in the Redcliff producing assets
-- Raw production of 3.2 MMcf/d as of January 2011; 100% of production is operated
-- Partners include Enerplus, ConcoPhillips Canada Energy Partnership and the City of Medicine Hat Gas Department
-- Main producing formations include the Cretaceous Medicine Hat and Second White Speckled Shale (shallow depth of ~600 mKB)
-- Potential to capture incremental gas with low cost infill drilling locations
-- Majority of Redcliff leases are developed with 4 to 6 wells/section; Nearby operators (Cenovus and Direct Energy) have drilled up to 16 wells/section
-- Imperial Oil has extensive infrastructure in the area; Operated with a 100% ownership in two compressors; Gas does not require processing beyond dehydration and compression; Custody transfer at the compressors.

Schuler area overview:
-- 100% working interest in the Schuler Medicine Hat Gas Unit
-- Raw production of 2.7 MMcf/d as of January 2011; 100% of production is operated
-- Unitized formation - Cretaceous Medicine Hat (shallow depth of ~ 600 mKB)
-- Includes interests in non-unitized formations on a portion of the lands
-- Potential to capture incremental gas with low cost infill drilling locations
-- Majority of Schuler leases are developed with 4 to 6 wells/section; No Unit drilling activity since 2007
-- Offset operators (Direct Energy, Enerplus and Nexen) have drilled up to 16 wells/section; Extensive infill drilling by other operators in the area in 2008-2009
-- Production is pipelined to Direct Energy’s compressor and dehydrator at 13-07-016- 01W4; Custody transfer meter upstream from the compressor
Posted by Rupesh Govindan at 5:07 PM No comments: Links to this post

JSC KazMunaiGas Exploration Production (KMG EP) has reached an agreement with the JSC National Company KazMunayGas (NC KMG) to acquire four hydrocarbon exploration contracts. As per the agreement, KMG EP acquires the following four contracts: Temir, Teresken, Karaton-Sarkamys and the territory adjacent to Uzen and Karamandybas. The acquisition cost of the four contracts is $40 million. According to the company’s estimates, the geological resources on four blocks are around 1.5 billion barrels of oil equivalent.

Try this free document search tool and save time!!
Temir and Teresken blocks are located in the Aktobe region in close proximity to the assets of Kazakhoil Aktobe LLP and Kazakhturkmunai LLP, as well as other assets, which may be of interest to KMG EP. The geographic location of the contract area has several advantages, including infrastructure and logistics. The territory adjacent to Uzen and Karamandybas is located in the area of operations of Uzenmunaigas production facility. Block Karaton-Sarkamys is located in the Atyrau region 100 km south-west of the Kulsary deposit in the area of operations of Embamunaigas production facility. 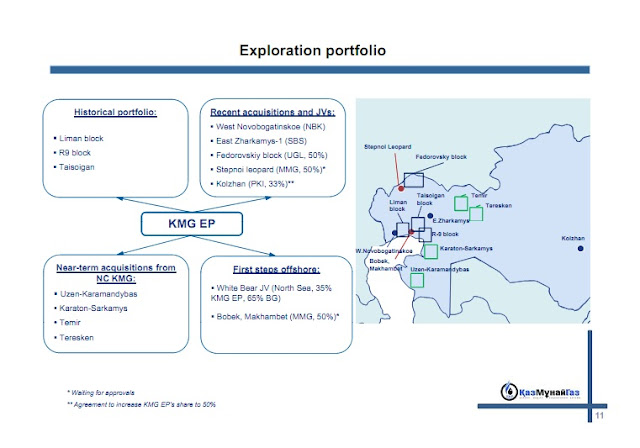 Source: KMP EP Credit Suisse LATAM and EMEA Conference- Mar 2011 PPT
The terms of the contracts on the territory adjacent to Uzen and Karamandybas, Karaton-Sarkamys block and Temir, is 6 years from 2010, with the right of extension until 2019. With regard to the Teresken block, the license is for 6 years, starting in 2006, with the right of extension until 2015. Significant synergies can be achieved through the use of the existing infrastructure of Embamunaigas and Uzenmunaigas production facilities in Atyrau and Mangistau regions, which will help to optimize capital and operating costs. 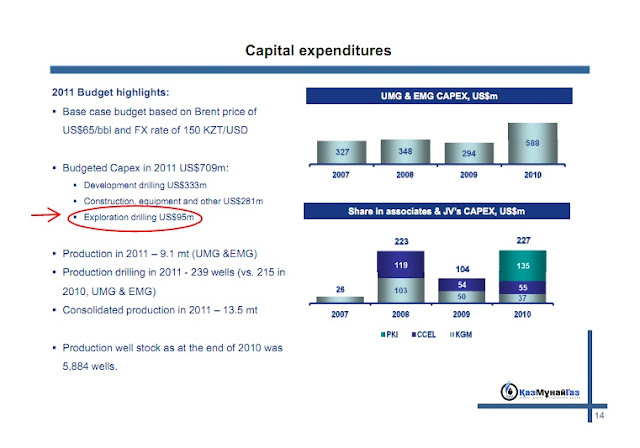 KazMunaiGas E&P will continue to acquire onshore Kazak assets!
In March 2011, KMG EP signed an approximately ~$150 million deal to acquire 50% interest in Fedorovsky block in Kazakhstan. This is followed by the $40 million deal with NC KMG. In line with their strategy of acquiring selective onshore assets in Kazakhstan, KMG EP is open for additional acquisitions. 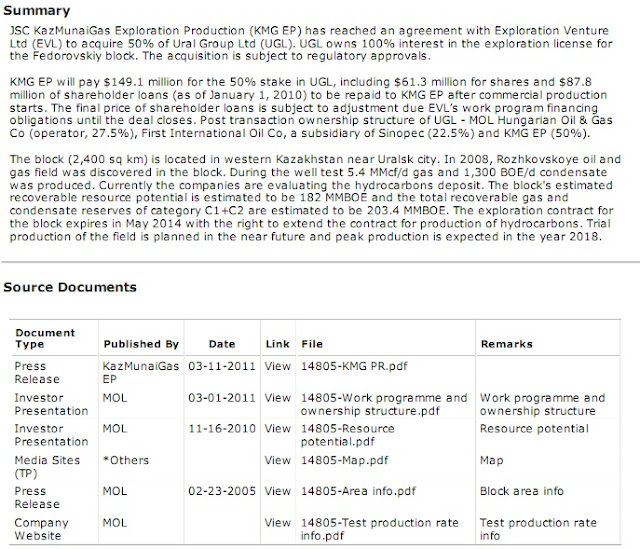