Santos International is one of Australia’s leading gas producers, supplying Australian and Asian customers. The company is the largest producer of natural gas for the domestic Australian market, and has significant gas and oil operations across Australia and in Indonesia, Papua New Guinea, Vietnam, Bangladesh, India and the Kyrgyz Republic. The company has a strong base in Australia and Indonesia and pursuing focused growth in Asia, of which our activities in Bangladesh are a key part. 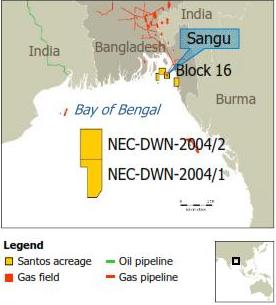 Santos acquired 3D seismic in 2010 over the Sangu and Magnama structures. This seismic has revealed some prospects of interest. Santos is planning to spend over $100 million on a three-well program in Block 16 beginning in the fourth quarter of 2011.  All wells are targeting new pools of gas not intersected by the existing Sangu field development. One of the wells, Sangu-11, will be drilled from the Sangu platform and, if successful, will be able to provide some immediate relief to the Chittagong gas situation. The other two wells are targeting prospects approximately five kilometers from the Sangu platform. A further exploration well may also be drilled on the Magnama prospect should time permit in the upcoming drilling season.
Try this free document search tool
In November 2010, Santos acquired all of the interests of Cairn in Sangu gas field and Block 16 exploration acreage. As a result of this transaction, Santos holds 75% interest (operator) in Block 16 (Sangu) and will have a 100% interest in Block 16 (Exploration). The deal is depicted below:

Tullow Oil plc agreed to acquire the interests of EO Group Limited, consisting of its entire interests offshore Ghana, for a consideration of $305 million. This acquisition will increase Tullow's interest in the West Cape Three Points licence offshore Ghana by 3.5% to 26.4% and increase the Group's interest in the world-class Jubilee Oil field, which Tullow Operates, by 1.75% to 36.5%. The receipt of Tullow shares as part of the consideration gives EO the opportunity to retain an indirect interest in the upside potential of all of Tullow's Ghanaian assets. 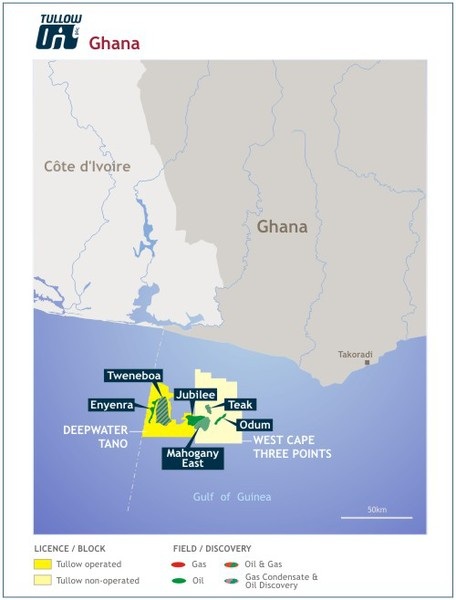 Just a day back, Tullow Oil agreed to acquire Nuon Exploration and Production (Nuon E&P) for a cash consideration of €300 million ($425 million) from the Vattenfall Group. The acquisition of Nuon E&P will significantly enhance Tullow's North Sea business adding a portfolio of 25 licences that include over 30 producing fields, numerous development and exploration opportunities and ownership of key infrastructure.  This portfolio will increase the Group's North Sea gas production by 9,000 boepd to approximately 23,000 boepd and add reserves and resources of 28 mmboe. 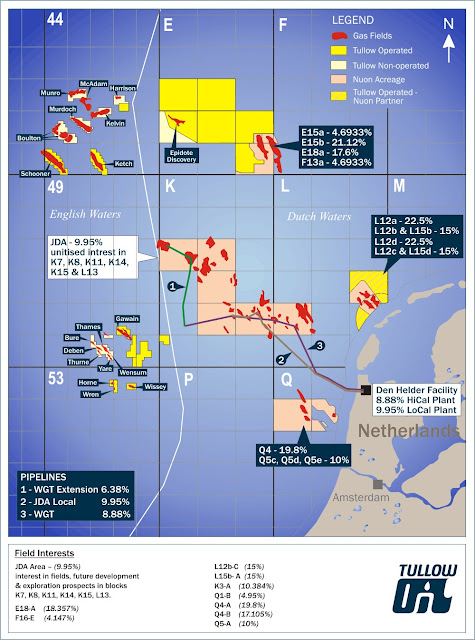 Overview of 2010 results of Tullow Oil 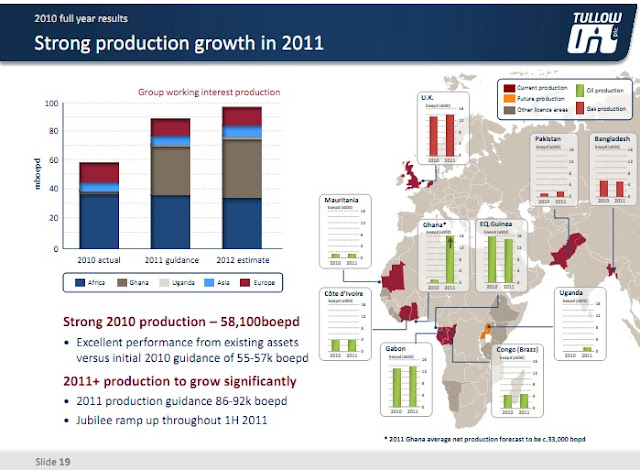 Try this Derrick Petroleum's free document search tool
Posted by 1Derrick at 4:27 PM No comments: Links to this post