Senegal - Overview of Oil and Gas Exploration and Main Players

Senegal is the westernmost country in West Africa. In the last 48 years, more than 145 hydrocarbon exploration wells have been drilled in Senegalese territory. At least 49 of these were drilled offshore, with 23 of these being located in the Casamance Offshore. The other area of interest that has been drilled is onshore in the vicinity of the Cape Vert Peninsula. The rest of the Senegal Basin outside these areas remains under-explored. An overview of exploration activity in Senegal is provided below.
For a list of West African oil discoveries in 2010 - 2011 click here. For information on Angola (South West Africa), click here. For a list of recent discoveries and exploration plans in neighbouring Ghana, click here, and for a list of all discoveries in Ghana click here. All information has been sourced from Derrick Petroleum's extensive exploration and deals databases.For a list of discoveries and exploration plans in Cote D'Ivoire in 2011 click here.
Petroleum prospecting in Senegal started in the 1950s and in the 60’s and 70’s a number of small fields were discovered, but were uneconomical and not exploited. In the late 1970s, offshore exploration started again and a field of heavy crude oil of 1 billion barrels was discovered. So far only one gas field (Diam Niadio 14) has been discovered. The only hydrocarbon production in Senegal at the moment is from the Gadiaga Field, about 60km north-east of Dakar. Fortesa holds 70% in the Gadiaga Development Area, with the remaining 30% held by Petrosen, the national oil company of Senegal. 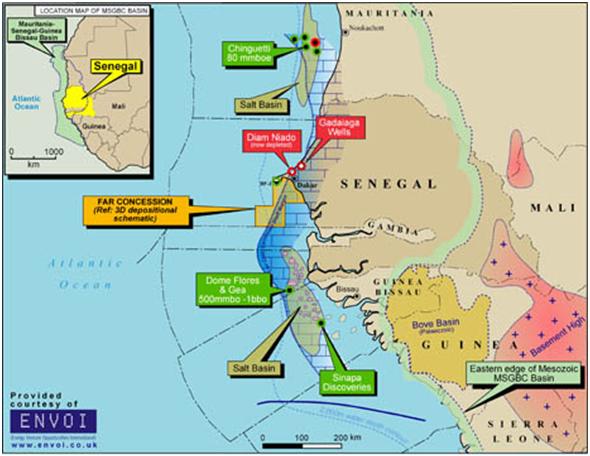 First Australian Resources Ltd (FAR) has 3 Blocks covering 2,086 sq km in Senegal. The Rufisque, Sangomar and Sangomar Deep offshore Production Sharing Contracts (PSC) cover an area of ~ 7,490 km2 over the shelf, slope, and basin floor of the Senegalese portion of the productive Mauritania-Senegal-Guinea-Bissau Basin. 3D seismic has been acquired and multiple prospects ranging from 200 million bbl to greater than 1 billion bbl potential have been mapped and identified. FAR is looking for a partner in Senegal (up to 50% available). FAR currently operates the blocks with a 100% interest but Ophir can earn the right to acquire a 25% interest in Senegal licence areas within 60 days of drilling the Kora prospect and in this case will also be appointed as operator.
Three  Exploration and Production Sharing Contracts were signed between Oranto Petroleum Ltd, a Nigerian based company and the State of Senegal, on 3rd December 2009 for the following blocks: Cayar Offshore, Saloum and Senegal Onshore South. 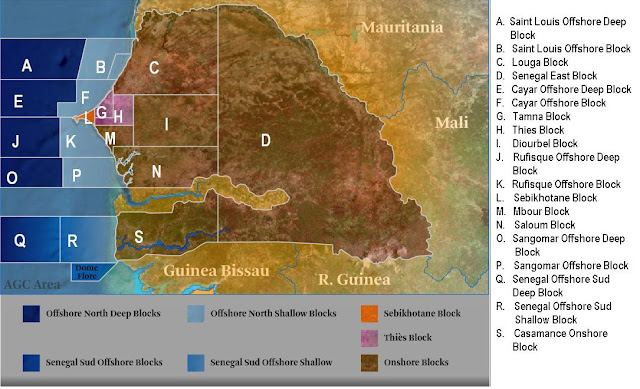 The Saint Louis Block covers the northern-most inshore section of the Senegalese offshore area and covers an area of 2,807 sq km. Energy Africa acquired the St. Louis exploration licence with Petrosen in late 2003. Tullow operates the licence with a 60 percent interest. Dana acquired a 30 percent interest from Tullow in the fourth quarter of 2004. Petrosen holds the remaining 10 percent. The operator Tullow is looking to replicate the success of its West African Cretaceous play in this block in Senegal. Although no plans have been put forward by the partners, exploration activity with drilling of a well on this block is a high possibility for 2012.
The Sebikhotane block has had many wells drilled and several seismic lines acquired including 3D covering 120 square kilometers around the Diam Niadio area since 1986. A Petroleum Sharing Agreement covering this block was signed with the Consortium Maurel & Prom – Orchard in July 2002. Maurel & Prom had planned to drill the KN-1 and BAOBAB-1 exploration wells in 2010, but it seems the drilling of these wells is on hold pending further information from the company.
The Thies block was first granted to Petrosen in 1993. With the Cooperation of PCIAC, the interpretation of different studies and surveys resulted in the identification of four prospects named respectively Gadiaga, Diender, Sebissou and Mont-Rolland. A drilling program of four exploration wells kicked off with the first well Gadiaga-2 (Gd-2) which was drilled between November 96 and January 97 at a total depth of 2180 m in Lower Senonian interval. Several interesting levels were encountered and six of them tested in the Senonian section with two levels in the Campanian giving commercial gas. A Production sharing agreement was signed in February 2001 with Fortesa Corporation, a Houston based company, for the production of the Gadiaga gas field and to continue the exploration of the Thies block.
Posted by Sanjay Samuel at 6:23 PM