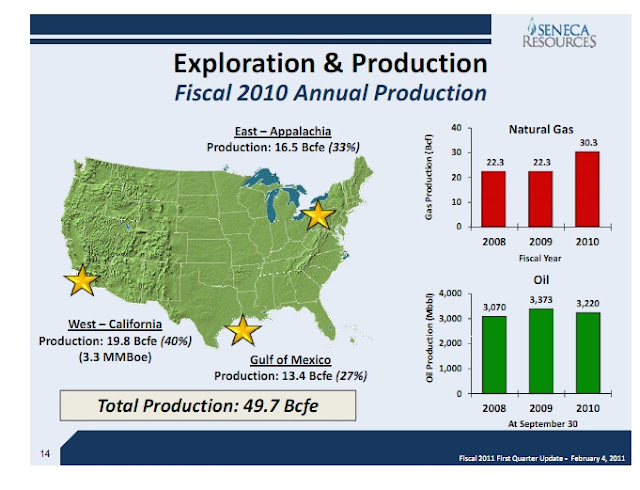 David F. Smith, Chairman and Chief Executive Officer of Seneca says, “We look forward to redeploying these proceeds to Seneca’s long-term growth opportunities in the Marcellus Shale. While our well costs have increased as a result of additional frac stages and increased service company charges, this has been offset by higher anticipated estimated ultimate recovery (EUR) factors. We are now anticipating well costs of $5.0 - $6.4 million for wells with up to 20 frac stages and lateral lengths reaching over 6,000 feet. Taking these factors into account, we expect to see results continue to improve over time, with some of our best wells achieving EURs of 8 Bcf. At a natural gas price of $4.00 per MMBtu, the pre-tax internal rates of return are still exceptional, ranging from 20 percent to better than 65 percent.” 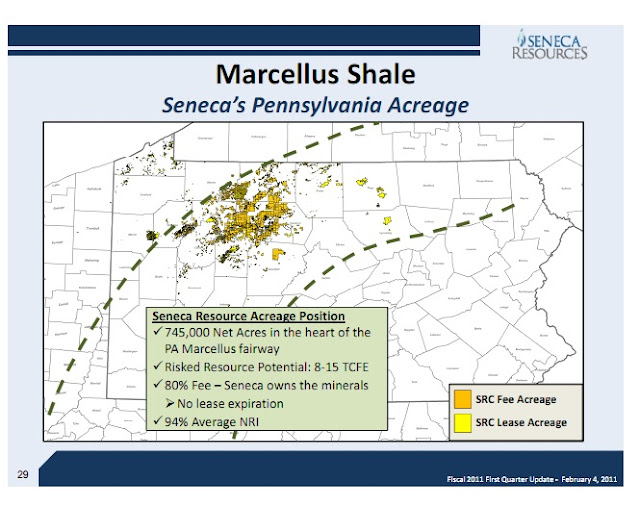 As a result of the above, Seneca’s capital spending in the Exploration and Production segment for fiscal 2011 is now expected to be in the range of $600 to $655 million, up from the previously announced range of $485 to $560 million.
Traffic towards Marcellus!!!
There has been a vigorous traffic towards Marcellus area in 2010 with around $17 billion worth transactions as against ~$1.4 billion worth transactions in 2009. Huge difference!!!
In 2009.... 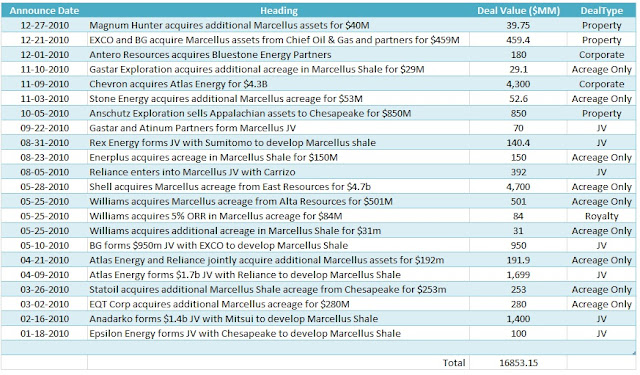 Seneca’s divestiture of GoM assets and focus on Marcellus is in a way similar to the recent Range’s divestiture of Barnett assets and diversion of maximum capital towards Marcellus. Read more on the Range deal: http://mergersandacquisitionreviewcom.blogspot.com/2011/03/range-drops-barnett-for-900-million-and.html.
Also, Bob Ramsey, an analyst at FBR Capital said, "Marcellus Shale gas will bring an estimated $250 billion in payments to Pennsylvania land owners (more than four times the entire state's deposits) and drive $8 billion to $15 billion of annual spending in the state, based on 2,000 to 3,000 wells drilled per year.”
See more publications on Marcellus: http://docsearch.derrickpetroleum.com/research/q/Marcellus.html
Posted by Anitha Bharathi at 5:48 PM No comments: Links to this post

Apache to divest certain Canadian conventional assets worth $1B as part of their debt reduction efforts in 2011 - Was the BP bite more than what it could chew? 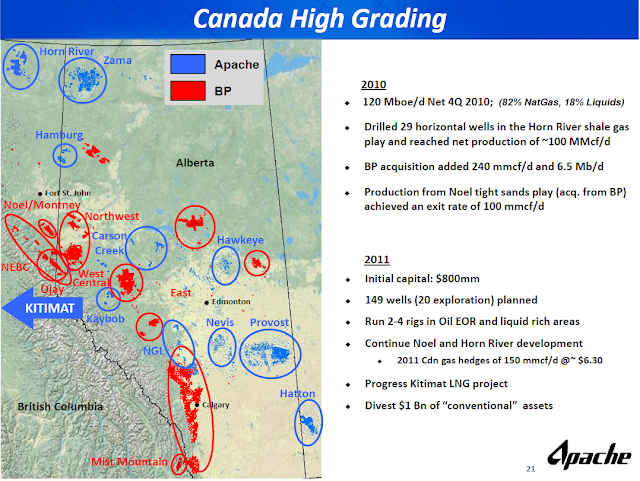 Apache Corporation is currently planning to divest approximately $1.0 billion worth of legacy conventional properties in Canada to optimize and high-grade the company’s existing portfolio of assets.

Apache’s Canadian conventional operations:
-- Apache has 6.3 million net acres across the provinces of British Columbia, Alberta and Saskatchewan, including approximately 1.3 million net mineral and leasehold acres in Western Alberta and British Columbia acquired from BP in 2010; These acreage includes both conventional and unconventional plays.
-- Conventional assets are focused on oil projects located primarily in Alberta and Saskatchewan.
-- Apache is utilizing horizontal well technology to develop waterflood and enhanced oil recovery projects in the Midale and Provost fields located in southeast Saskatchewan, and the Zama and House Mountain fields located in Alberta.
-- The company will also continue intermediate-depth gas development drilling in Kaybob and West 5 areas in Alberta.
-- During 2011, Apache will run 2-4 rigs in the company’s oil, EOR and liquid-rich areas.


Posted by Rupesh Govindan at 3:16 PM No comments: Links to this post