Sinopec tastes a slice in Origin's APLNG project.. More slices in APLNG up for grab!!!

Sinopec agreed to acquire a 15% equity stake in Australia Pacific LNG Pty Ltd (APLNG), a 50/50 joint venture created by Origin Energy and ConocoPhillips in 2008. Post transaction, the ownership structure in the joint venture would be- Origin Energy (42.5%), ConocoPhillips (42.5%) and Sinopec (15%). As part of this agreement, APLNG has agreed to supply up to 4.3 million tonnes per annum (MTPA) of LNG to Sinopec for 20 years. 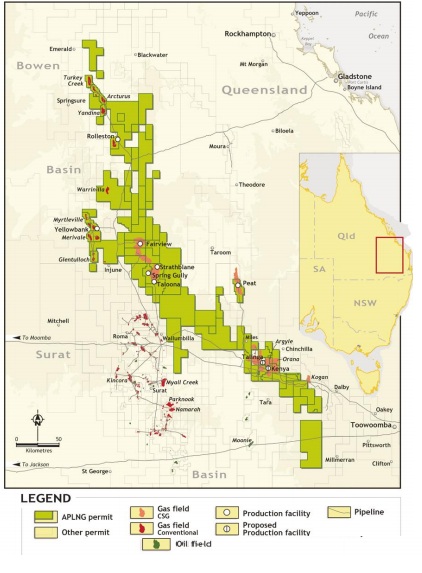 APLNG Overview
APLNG project includes the development of Australia Pacific LNG’s substantial coal seam gas resources in the Surat and Bowen basins over a 30-year period, a 450 km transmission pipeline, and a multi-train LNG facility on Curtis Island, near Gladstone. Initial plans for the LNG facility are focused on developing two LNG trains, each with a nameplate capacity of approximately 4.5 MTPA of LNG. The project is expected to be sanctioned by mid-year 2011, with the first LNG cargo to be delivered in 2015. The APLNG project’s reserves, as of June 30, 2010 were: Proved plus Probable - 10,143 PJ (1,594.13 MMBOE), Proved plus Probable plus Possible - 14,598 PJ (2,294.29 MMBOE) and Contingent Resources on best estimate case - 4,844 PJ (761.31 MMBOE). 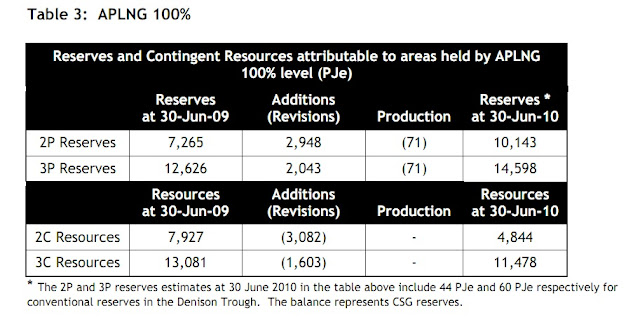 What could be the value of 15% stake in APLNG
The value of the deal was not disclosed. However, the 15% stake in APLNG is estimated to be atleast around $2 billion. Here is a simple valuation method…
ConocoPhillips acquired 50% stake in APLNG for $8 billion when the financial crisis was wide spread in 2008. Of the total $8 billion, $2 billion was marked as performance payments. In comparison with the $6 billion price, the current deal involving 15% stake should be worth atleast around $2 billion.
Largest supply agreement amongst Queensland LNG ventures!!!
This supply agreement would be the largest for any of the Queensland ventures intending to liquefy gas extracted from coal deposits, Grant King, managing director of Origin Energy, told reporters.
Australia was China’s biggest supplier of LNG last year, accounting for 42% of the 9.4 million tons in imports, according to customs data. China paid an average $191 for each ton of Australian term-contract supplies in 2010, compared with an average $323 for all imports, including both term and spot cargoes, customs data show. “The deal will help Sinopec diversify gas supply sources to meet Chinese demand for natural gas," said Sinopec's General Manager Su Shulin in a statement.
More slices of APLNG up for grab!!
Origin and ConocoPhillips will “intensify the dialogue” with other potential customers and may sell more of its interest in the venture, Grant King of Origin Energy said. Will these Chinese, to quench their thirst for natural gas demand, again buy the additional stake?
Posted by Anitha Bharathi at 6:46 PM No comments: Links to this post

Origin JV may sell down more of APLNG 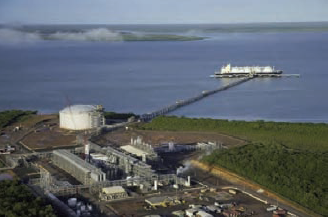 Origin Energy may sell down more of its stake in the $35 billion Australia Pacific LNG (APLNG) project after it divested a combined 15% stake to Sinopec with its joint venture partner ConocoPhillips. The current ownership structure of the project - Origin Energy (42.5%), ConocoPhillips (42.5%) and Sinopec (15%). 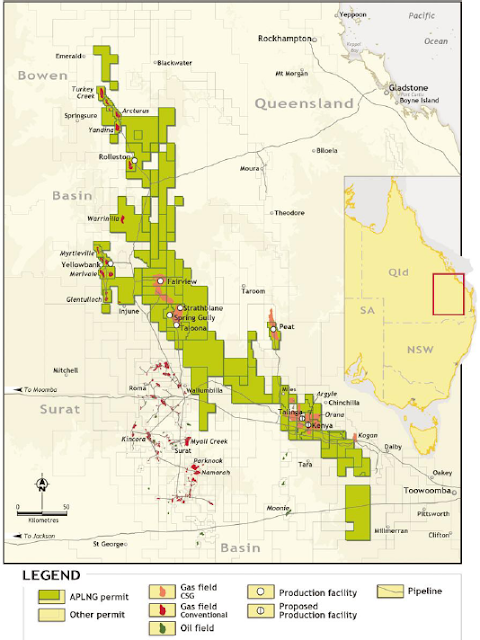 The $35 billion APLNG project has the following objectives -
-- Development of the Walloons gas fields in the Surat and Bowen basins in south central Queensland with up to 10,000 CSG wells; these gas fields may include Spring Gully, Peat, Denison, Fairview, Arcadia Ridge, Kenya, Kenya East and Angry Jungle;
-- Construction and operation of a 450 km main gas pipeline to connect the Walloons gas fields with the LNG facility near Laird Point;
-- Construction and operation of an LNG facility on Curtis Island near Gladstone for production and export of approximately 18 Mtpa of LNG. The final configuration of the LNG plant is yet to be determined, but may comprise up to four trains, each producing ~4.5 Mtpa of LNG. 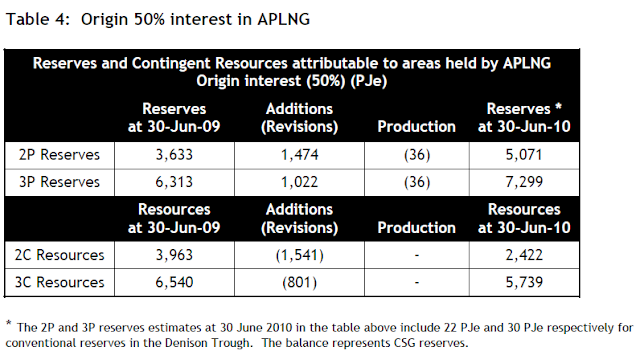 The project has recently won environmental approval from the federal government. The companies aim to make a final investment decision to proceed with the project later this year and expect to rapidly progress the project to sanction, with the first LNG cargo to be delivered in 2015. The project life is approximately 30 years.
Posted by Rupesh Govindan at 6:42 PM No comments: Links to this post

Anadarko discloses its 2011 budget plans; exploration to eat up one-fourth of the pie!

Anadarko has disclosed its 2011 outlook and capital program from which it looks forward to generate a significant momentum to continue in 2011 and ahead with its diversified portfolio globally. 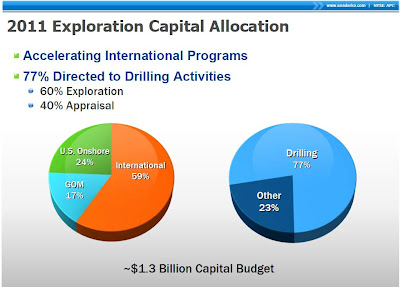 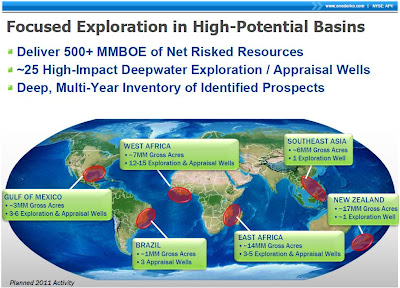 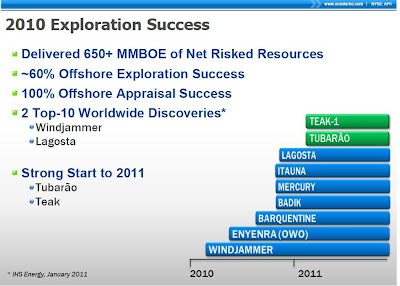 Posted by Sanjay Samuel at 5:17 PM No comments: Links to this post


The company made significant advances in achieving the goals set out in its 2010 Strategic Plan, including the incorporation of Sinopec in Brazil, the placement of 4.2% of YPF and the sale of nonstrategic assets.
Key Achievements in 2010 and Outlook for 2011: 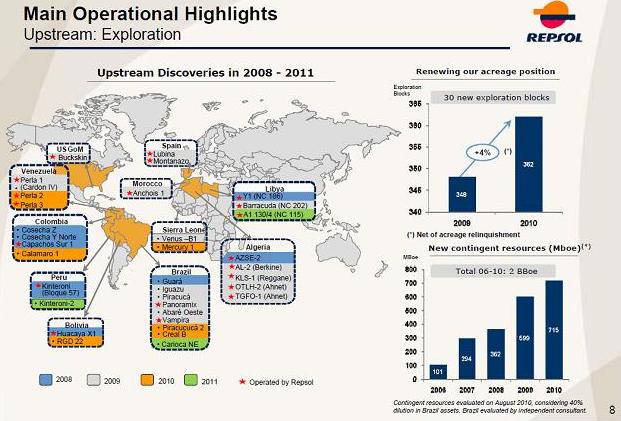 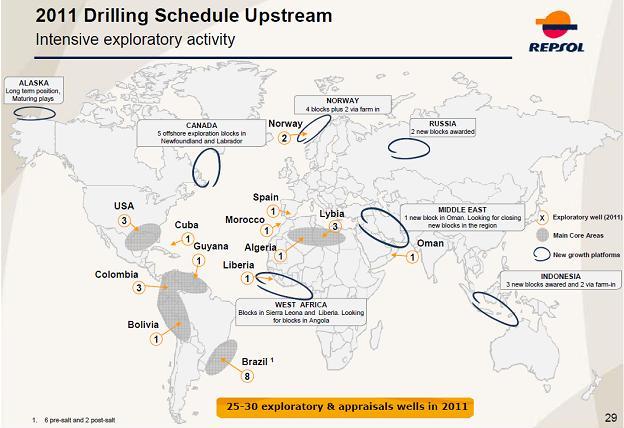 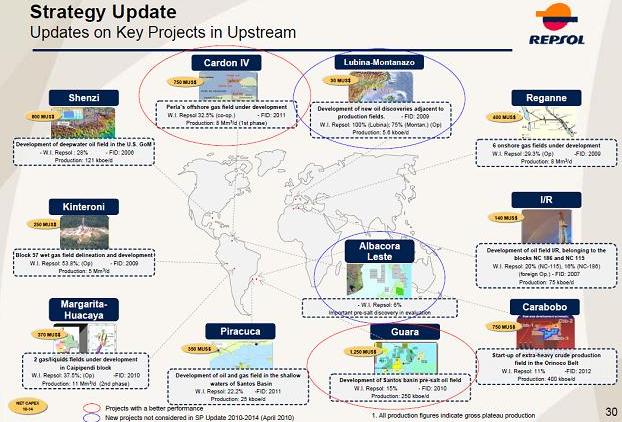 Updates on key projects in upstream 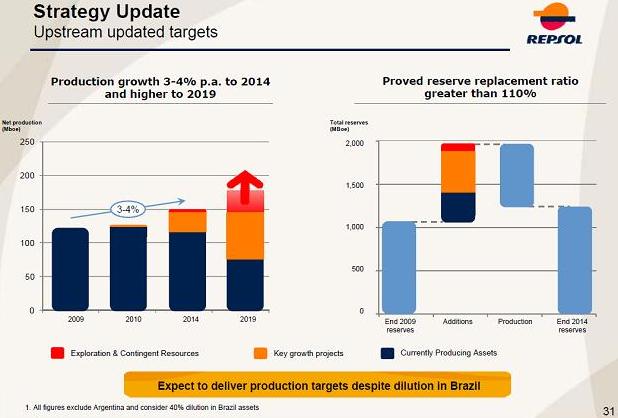 2011- A busy year for BHP?? BHP says it sees opportunities in the oil and gas industry. 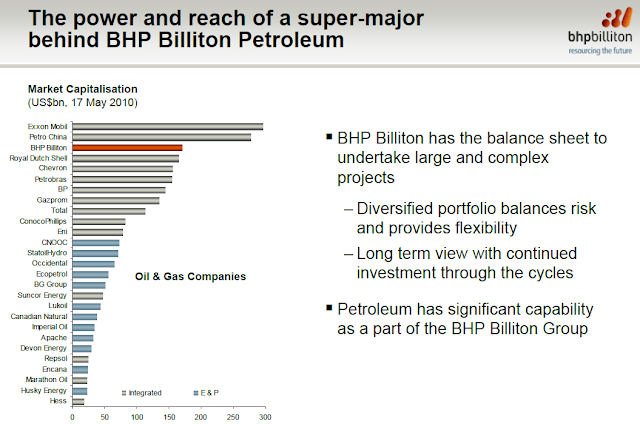 BHP is still interested in takeovers even after setting aside $80 billion for own projects.
Regulatory concerns are impeding iron-ore acquisitions, though BHP's potash, copper, and oil and gas businesses aren't constrained in the same way,  Marius Kloppers (CEO) said
BHP reported record first-half profit, has committed to spend $80 billion to expand and develop BHP's own mines and oil fields after three investments worth a total of more than $100 billion(Non Oil and Gas ventures- Potash, RioTinto bid and an iron ore venture) were knocked back in the past four years.  Still, acquisitions aren’t off its agenda.
Industry rumours are BHP may decide to pursue energy acquisitions, singling out Anadarko Petroleum Ltd., Woodside Petroleum Ltd. as possible targets. 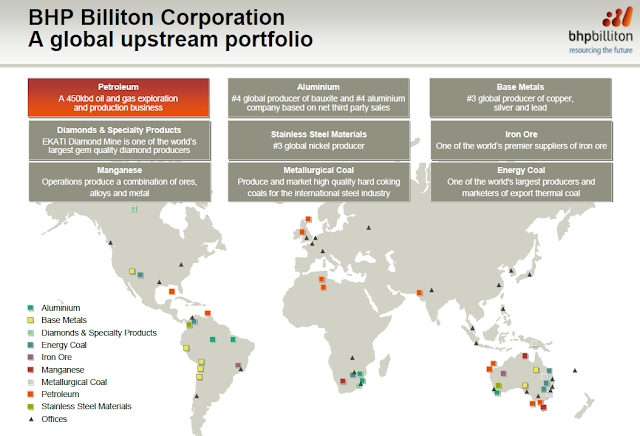 Internationals and Majors flocked towards US shale gas opportunities 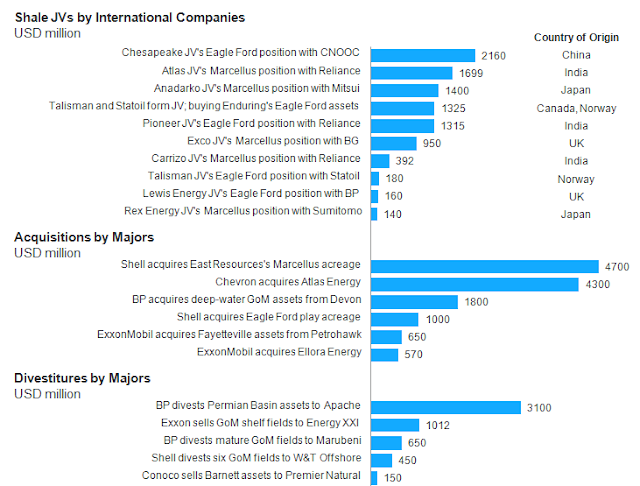 International companies followed up 2009 activities by continuing to enter into US shale gas JVs and providing US operators much needed capital to develop their assets.  The US is attractive to internationals because of its fiscal regime, large shale gas reserve potential and technological opportunities. The international firm’s large balance sheets, low costs of capital and long term view allow them to “pay up for US opportunities”. The same could be said for traditional majors who also made aggressive moves into US shales in 2010 through corporate acquisitions like  East Resources (Shell) and Atlas (Chevron). To fund new shale opportunities the majors also sold non-core assets.