BG’s Q1 2011 E&P Production hit by civil unrest in North Africa, flooding in Australia, and shutdowns in the North Sea; Will BG ramp up to achieve the Group’s long-term rate of 6-8% to 2020?

Natural Gas giant, BG has challenging first quarter for O&G operations. The group’s production for the period was down 5% from 61.3 mmboe to 58.2 mmboe over the same period last year. This is due to unrest in North Africa, flooding in Australia, an increase in UK tax and a shutdown in the North Sea. The North Sea's effect on the company was exacerbated by the temporary shutdown, largely for maintenance, of the Everest and Lomond platforms. This contributed to a 5% fall in production volumes. In Tunisia, the restart of the Hasdrubal plant was delayed, and in Egypt there was significant disruption to normal patterns of gas demand. In addition, production volumes in the quarter were affected by extreme weather conditions and extensive flooding in Queensland, Australia. However, BG pointed to advances in Brazil and the signing of two sales agreements in Japan as reasons to be optimistic.

HIGHLIGHTS of the Quarter:
Brazil
Production at the first permanent module on Lula Sul increased to some 25 000 boepd, and construction of the next two FPSO modules advanced to around 50% complete, in line with plans.
In April 2011, conclusion of a Drill Stem Test (DST) on the Guará Norte well (3-SPS-69) in Block BM-S-9 in the Santos Basin was done. The DST confirmed high productivity of some 6 000 bopd of light oil (approx 30° API) with flow rates constrained by test facility capacity.
In March 2011, successful completion of drilling on the Iara Horst well in the BM-S-11 concession in the Santos Basin. The well encountered good quality oil (28° API) in a thick reservoir section. Further evaluation activity continues.
In February 2011, a new discovery of oil (approximately 26° API) in Block BM-S-10 in the Santos Basin. The discovery well, known as Macunaíma, is located in a water depth of 2,134m, approximately 244 kms off the coast of Rio de Janeiro state. Further evaluation of the discovery continues.
USA
BG Group's shale gas operations continued to gather momentum, with 46 wells spudded and 22 drilling rigs operating in the Haynesville shale during the quarter. Seven wells were drilled in the Marcellus shale.
Tanzania
In April 2011, the company announced its third Tanzanian gas discovery. The Chaza-1 well is located in Block 1 approximately 18 kms offshore southern Tanzania in a water depth of around 950m. It is intended that a second drilling campaign will commence in late 2011.
Kenya
In March 2011, the company signed a Heads of Agreement with the Kenyan government to acquire a 40% equity interest in the exploration block L10A and a 45% interest in block L10B, subject to negotiation of Production Sharing Contracts. BG Group would operate both blocks.
India
In April 2011, a consortium led by BG Group (50% and operator), was identified as the qualifying bidder for an exploration block (MB-DWN-2010/1) offshore the west coast of India. The block is approximately 350 kms from the coast, covering an area of 7,963 sq kms and in water depths in excess of 2,000m. The award of the contract will be subject to final confirmation from the government of India and regulatory approvals.
Norway
In the 21st licensing round held in April, the Norwegian government awarded BG Group a 40% interest in and operatorship of licence PL599, located in the Norwegian Sea. 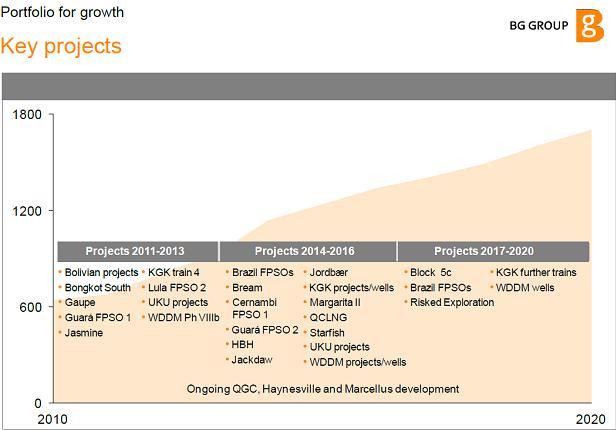 "We now expect modest production growth in 2011. The plans for a ramp-up in production in 2012 and 2013, as well as our 2020 goals, are unaffected and are supported by significant progress with our growth projects in Brazil, the US and Australia, as well as further exploration and appraisal success in Brazil and Tanzania.", Mr. Chapman,  BG Group’s Chief Executive added.
BG's Strategic Acquisitions in 2010 and 2011

BP looks for acquisition opportunities in Brazil and Russia.. Plans to spend $20 billion in 2011.

“BP is looking to acquire stakes in Brazilian oil fields to increase the production in South America”, said Guillermo Quintero, president of BP's Brazil division, during a press conference. Guillermo added saying, "We can't reveal the names for strategic reasons, but we have two or three farm-in negotiation processes underway. We didn't come to Brazil just to continue what Devon started, Brazil is strategic for us."
Try this free document search tool

Capital of $20 billion set for 2011
BP plans to spend $20 billion to expand its operations around the world in 2011 and is looking to new areas including Brazil and Russia to increase the oil production. BP's assets in Brazil include 10 blocks. Only one of them is in production phase with output of around 25,000 bpd. Guillermo said BP's production in Brazil could reach 100,000 bpd, but did not offer a clear time frame for this.
Also, BP has plans to participate in Brazil's 11th bidding round to be held in September 2011, which will not include blocks in the coveted deep-water region known as the subsalt that is home to the country's largest oil discoveries.
Status of M&A activity in BRAZIL
Recently, BP received the final approval to complete the purchase of ten exploration and production blocks in Brazil from Devon Energy. In 2010, the Chinese were active acquiring assets in Brazil. In addition, Brazil's Mines and Energy Ministry is planning to include frontier areas in north and northeast Brazil in the highly anticipated round 11 for new oil and natural gas blocks. The round is also expected to include onshore and deepwater areas in mature basins, in addition to equatorial margin basins in the northeastern and northern regions.
The map shows the major 2010 deals in Brazil. 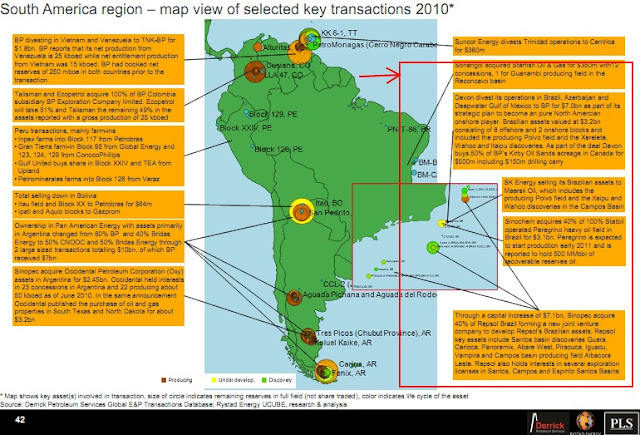 Source: Derrick Petroleum E&P Transactions Database
Though 2010 was a disaster for BP due to Macondo oil spill, 2011 seems like a progressive year for BP that has clinched the $7.2 billion alliance with Reliance and announced $20 billion capex for acquisitions in 2011. The following graph shows 2010 production and capex of BP compared with its peers.


Create your own report using this interactive tool.
Posted by 1Derrick at 4:23 PM No comments: Links to this post