Canadian Natural Resources, which operates in North America, North Sea and Offshore West Africa, reported its Q1 2011 results. Natural gas production for the quarter averaged 1,256 MMcfpd, up 2% from same quarter last year. This is primarily due to new production volumes from the Septimus facility in Northeast British Columbia and from natural gas producing properties acquired during 2010. 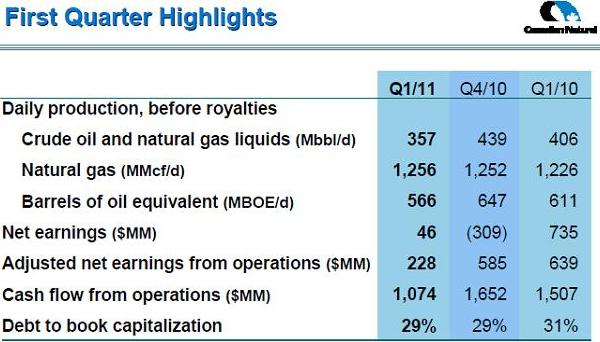 North Sea:
North Sea production was 34,101 boepd during the quarter, down 8% from Q1 2010 as a result of natural declines. The UK government’s implementation of tax increases in the North Sea resulted in a 24% reduction in the UK. Consequently, Canadian Natural plans to cancel drilling activities in Murchison and accelerate its plans to commence decommissioning of the Murchison platform. The Company will continue to high grade all North Sea prospects for potential future development opportunities. In Q1 2011 the North Sea represented 6% of total Company production.
Offshore Africa
Crude oil production at Offshore Africa was 25,488 boepd for the quarter, a decrease of 15% from Q1/10 as a result of natural declines. Subsequent to quarter end, production at the Olowi Field has been temporarily suspended as a result of a failure of its mid water arch, a support buoy which provides support for production and gas lift flowlines and the main power line.  Current activities are being monitored and a full evaluation is being completed.  As a result, the high end of the production guidance for Offshore Africa has been reduced by 2,000 boepd for 2011.
2011 Development Plan:
The Company forecasts 2011 production levels before royalties to average between 1,203 and 1,270 MMcfpd of natural gas and between 381,000 and 421,000 boepd of crude oil and NGLs. Q2 2011 production guidance before royalties is forecast to average between 1,219 and 1,244 MMcfpd of natural gas and between 345,000 and 375,000 boepd of crude oil and NGLs.
- The natural gas capital expenditure budget for 2011 has been increased by $150 million to reflect increased drilling in the Company’s liquids rich unconventional natural gas plays at Septimus, Edson and Wild Hay and increased related infrastructure projects to reduce operating costs, increase liquids yields and maximize facility utilization.
- The Company targets to drill 827 net primary heavy crude oil wells in 2011 which will drive a targeted 13% production growth in primary heavy crude oil.
- Continue to implement strategies at Pelican Lake to increase production levels from this world class oil pool.
- At Kirby, construction of the 40,000 boepd targeted peak production facility is underway
Construction of the third Ore Preparation Plant looks to be slightly ahead of schedule, which will translate into higher reliability levels upon recommencement of operations.

Check out Updated E&P Company's Interactive Tool:
Posted by Kesav Gupta at 4:36 PM No comments: Links to this post

Enerplus agreed to sell a portion of its Marcellus natural gas interests in Pennsylvania, Maryland and West Virginia for estimated proceeds of US$575 million. The sold interests include:
Do try this free document search tool 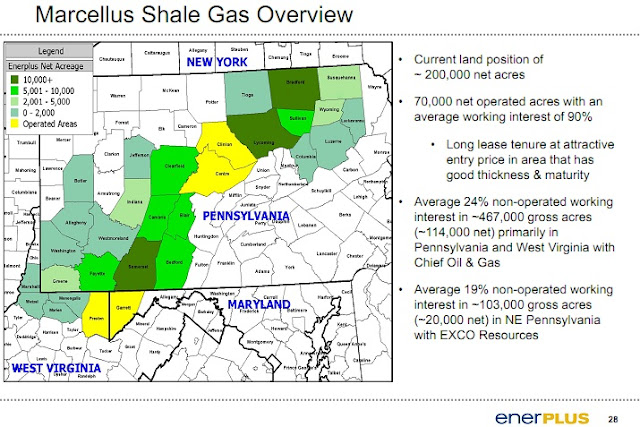 Upon conclusion of this transaction, Enerplus will retain all of its non-operated acreage in Bradford, Susquehanna, Lycoming, Columbia, Tioga, Wyoming and Sullivan counties in northern Pennsylvania as well as its operated acreage in Clinton County, Pennsylvania, Garrett County, Maryland and Preston County, West Virginia. Enerplus will retain ownership in approximately 110,000 net acres of land with an independent best estimate of 2.3 Tcfe of natural gas contingent resource and 92 Bcfe of proved plus probable natural gas reserves, each as of December 31, 2010. Of this total, approximately 60% (or 66,000 net acres) will be operated by Enerplus.
Value break-up for Reserves and Resources.. 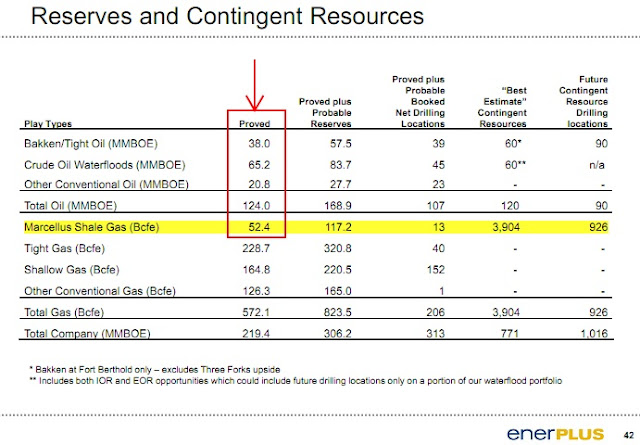