Mako Energy Limited has announced that it, and its joint venture partners, Transerv Energy Limited and Kilgore Oil & Gas Ltd, are planning a potential farmout or other disposition of all or a portion of their Duvernay and Rock Creek mineral rights in West Central Alberta. They have engaged Macquarie Capital as advisor.

The land holding of the joint venture within the Duvernay and Rock Creek fairway totals 261.08 gross sections (167,040 gross acres). Mako holds 50% interest in both the resource plays, and the remaining is held by Transerv (34%) and Kilgore (16%). 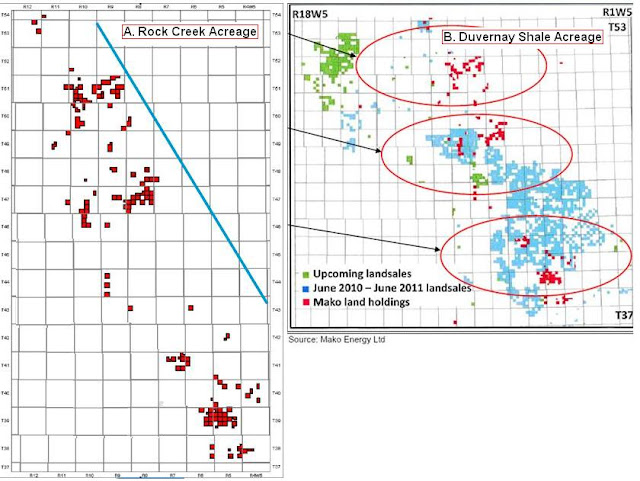 Rock Creek Project
• The total land holdings of the joint venture within the Rock Creek project is 132.28 gross sections (84,659 gross acres). The land position extends across Niton, Pembina, Willesdon Green and Rimbey fields.
• Highly analogous to the Bakken and Cardium unconventional light oil plays.
• Proven Production reservoir-20 MMbbls of liquids and 1 Tcf of gas.
• The project has estimated recoverable resources of 30 MMBOE, gross P90 resources of 189.78 MMBOE (80% Oil) and gross P10 resources of 286.58 MMBOE (Source: Sproule and Associates).
• The average Estimated Ultimate Recovery per well is 168,000 BOE.
• Plan to commence a 3-well drilling program in September 2011 comprising horizontal wells with multi-stage fracs. Kilgore anticipates drilling and completion cost of approximately C$4.5 million per well.
• Transerv reviewing options for select farmout to fund initial 3 well program.
• Horizontal wells have been used to exploit the Rock Creek gas play for the last five years with approximately 30 wells. However, there have been only 5 applications of horizontal wells to the Rock Creek oil play, of which two are still confidential.
Duvernay Shale Acreage
• The total land holdings of the joint ventures within the liquids rich Duvernay Shale is 128.28 gross sections (82,099 gross acres).
• The Duvernay formation has been the focus of recent industry attention which generated a one day record land sale of C$750 million for 497 sections (318,080 acres) of land surrounding, or contiguous, with the joint venture’s lands with an average metric of about $2,000/acre ($5,000/hectare).
Comparable Deals
• In April, 2011, Encana acquired about 190,000 net acres in the Simonette and Kaybob areas of the Duvernay shale in for approximately US$300 million or an average cost of about C$1,600 per acre (US$1,579 per acre). The company believed that the bulk of the acreage (~2/3 of total acreage) was located in the liquids rich window and planned to drill 3 to 4 horizontal wells in the year 2011, starting in around August. As no Proved Reserves were booked at the time, Derrick ascribed the entire deal value ($300 million) to Undeveloped Acreage ($1,579/ Acre).
• In June, 2011, Talisman acquired a 100% WI in approximately 255,000 net acres in the Duvernay Shale play in through land sales for $510 million or $2,000/Acre. Talisman believes this to be a liquids rich shale play.
Duvernay Shale vs Other shales

Derrick Comments
Derrick values this package between $80-$100 million for

The Mako JV Duvernay lands are adjacent to the land where Talisman paid a whopping $5,000/ Ha ($2,000/ acre) for 255,000 acres for a total consideration of $510 million in the 1 June, 2011 Alberta Crown Land Sale. The Mako JV lands were acquired previously for about $200/ Ha, as reported by Transerv. This is a substantial increase in the value of the shale acreage and the Mako JV is looking to capitalize on appreciation in their Duvernay shale property.
Posted by Sanjay Samuel at 4:11 PM No comments: