Cenovus was formed on 2009 from the split of Encana Corporation into two independent publicly traded energy companies: one an integrated oil company (Cenovus), the other a natural gas company (Encana). The company had operations in Athabasca region of Northern Alberta and southern Saskatchewan.


Cenovus posted increase in oil sands results for the first quarter 2011. The company’s quarterly production was 137,355 boepd, up 5% from the same period last year. Cenovus’s oil sands segment (66,828 bpd) posted 14% production increase over Q1 2010 (58,546 bpd). However the company’s natural gas production was 652 MMcfpd for Q1 2011, down 16% over Q1 2010. The Company’s strategy is to focus on the development of its substantial crude oil resource in Alberta and Saskatchewan. Cenovus is looking primarily in developing the land position in the Athabasca region in northeast Alberta.
Try this free document search tool
Cenovus reportable E&P segments include Oil Sands and Conventional. Oil Sands, which consists of Cenovus’s producing bitumen assets at Foster Creek and Christina Lake, heavy oil assets at Pelican Lake, new resource play assets such as Narrows Lake, Grand Rapids and Telephone Lake, and the Athabasca natural gas assets. Conventional, which include development and production of conventional crude oil, natural gas and NGLs in Alberta and Saskatchewan.
Expansion phases C and D at Christina Lake continuing to progress on target with expected first production at phase C in the third quarter of 2011 and at phase D in early 2013; and Additional progress on the CORE project at Wood River with coker start up expected in the fourth quarter of 2011. 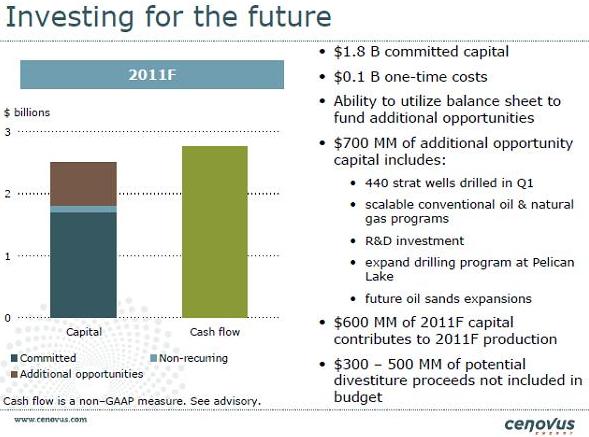 In Feb 2011, Cenovus announced for a venturing partner to develop oil sands holding and boost the value of reserves. The company will get $3 billion, assuming 50-50 JV. On a gross basis, about 260 of the assessment wells were drilled at the company’s oil sands properties in 2010 and an additional 450 strat wells are expected to be completed in 2011. In addition, Cenovus has identified 10 other oilsands projects - Narrows Lake, Grand Rapids in the Greater Pelican region and Telephone Lake project in the Borealis region for future development. 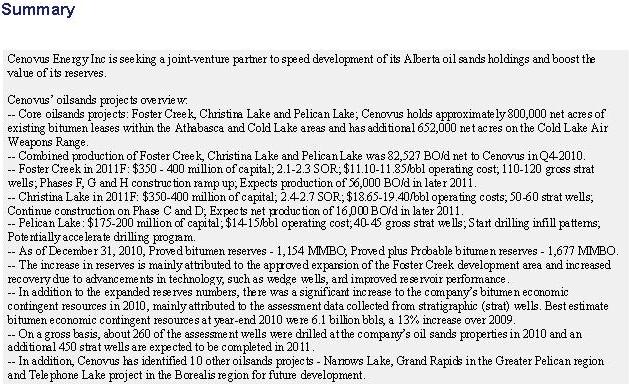