Encana reported average production of 3.34 Bcfepd for Q1 2011, up 2% over first quarter 2010. The company is on-track to meet 2011 year-end production guidance of between 3.475 Bcfepd and 3.525 Bcfepd for 2011. The company has accelarated oil and NGLs production from its extensive liquids-rich lands – now covering more than 1.7 million acres in Canada and the U.S. 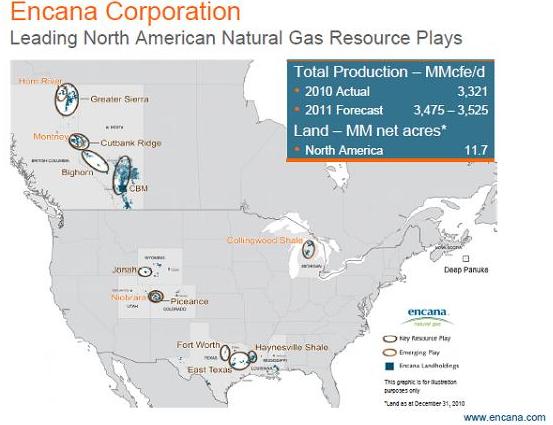 Encana redirected a portion of our capital investment to oil and natural gas liquids development and exploration to build facilities to extract more liquids from our high energy-content natural gas streams. The company is drilling liquids-prone targets on our existing lands, expanding developments into liquids-rich areas, exploring for oil, and acquiring large and significant positions in highly-prospective liquids-rich lands. “The capital investment associated with these multiple initiatives is expected to represent about $1 billion in 2011,” Eresman, President & CEO, Encana said.

Encana has assembled about 190,000 net acres in the Simonette and Kaybob areas of the Duvernay shale in Alberta, adding to its existing 380,000 net acres of liquids-rich lands in the Alberta Deep Basin and 495,000 net acres in the Montney in Alberta and British Columbia. In Colorado, Encana holds about 240,000 net acres in the Piceance and Denver-Julesburg (DJ) basins where the company has identified liquids potential in the Niobrara and Mancos shales. In Michigan this year, Encana plans to expand evaluation drilling on its 425,000 net acres in the Collingwood shale.
Encana offers Horn River and Greater Sierra JV and acquisition opportunities in northeast B.C.
Encana’s joint-venture investment strategy is aimed at accelerating value recognition of the company’s resource potential. This new joint venture initiative builds on previous announcements of a farm-out agreement with Kogas Canada Ltd., a subsidiary of Korea Gas Corporation, in the Horn River and Montney formations and a planned joint venture and acquisition by PetroChina of a 50% interest in Encana’s Cutbank Ridge business assets. RBC Capital Markets and Jefferies & Company, Inc. have been retained by Encana to conduct the potential joint venture and divestiture processes on the Horn River and Greater Sierra assets. 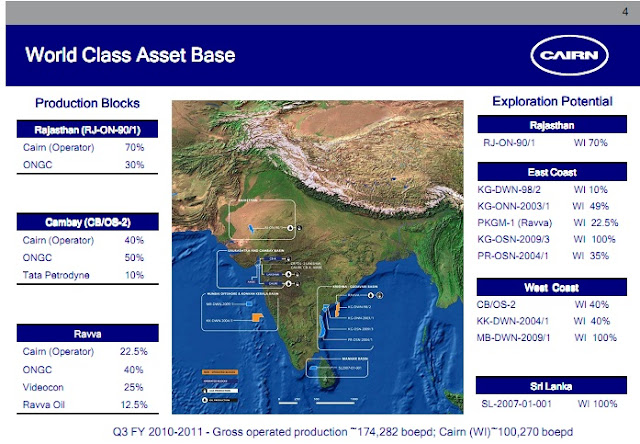 Try this free document search tool!
Vedanta keen on Cairn!!
Vedanta, in August 2010, had proposed to buy up to 51% stake in Cairn India from Cairn Energy for as much as ~$8.8 billion. As announced on 13 December 2010, Vedanta received shareholder approval for the purchase of a 51%-60% interest in Cairn India. The transaction is yet to receive the Indian government's approval, due to a dispute in royalty payments.
Subsequent to the deal to buy Cairn India at Rs 405 a share, Vedanta announced an open offer to buy an additional 20% stake at Rs 355 a piece. The Rs 405 a share price that Vedanta is paying to Cairn Energy, includes a Rs 50 per share non-compete fee, which is not being paid to minority shareholders.
Vedanta is now in quite comfortable position even if the response to the open offer is moderate. 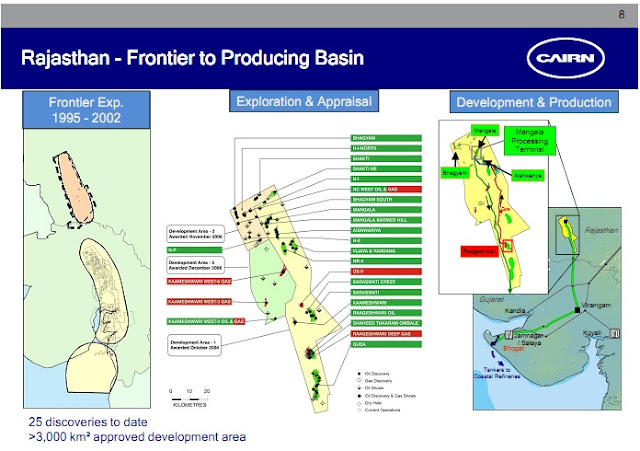 Indian Upstream Sector- A Magnetiser!!
2011- A big year for Indian Upstream sector.. This year is marked with two significant transactions
- BG's $7.2 billion alliance with Reliance
- Vedanta's offer to acquire upto 51% stake in Cairn India for ~$8.8 billion.
These deals show the confidence of the foreign players in the Indian oil sector. Many more players to venture into India with the path set by these two deals.
The following slide shows the overview of the Vedanta-Cairn India deal 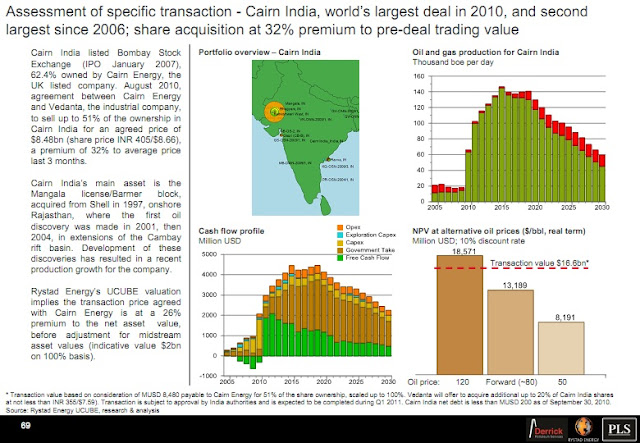