Brazil to unleash its presalt potential in H2 2011 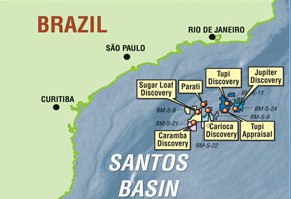 Brazil's government will auction rights to develop mammoth offshore oil and gas blocks in this year. The first auction of presalt fields could be held in the second half of the year, although new legislation on how much would be charged as a royalty on production, and how that money would be distributed among state and municipal governments would have to be approved first.

A number of mammoth oil fields have been discovered off the southeast coast of Brazil, lying in ultra-deep water and below more than three miles of sand, rocks and a shifting layer of salt. The area is estimated to hold between 50 billion and 100 billion barrels of oil.

The auction is expected to include some of the reserves discovered in the massive Libra area, estimated by Brazil's Oil Regulatory Agency ANP to hold recoverable reserves of between 3.7 billion and 15 billion barrels of oil equivalent. These fields will be handed over under different terms from the more traditional concessions used in the oil.

Final approval for the planned 2011 auctions is still required from the country's National Energy Policy Commission, or CNPE, which will also define exactly which areas will be put up for auction.

The only way for Brazil to make the most of its oil reserves is by farming out contracts to international exploration firms with the expertise and technology to break through the deep, compressed salt layer. But before Brazil opens up its reserves and takes bids from oil industry giants, the country’s parliament is hoping to secure Brazil’s financial future by ensuring the Petrobras, which owns a majority stake in the oil in question, benefits from any oil extraction programme.

The government, which owns Petrobras, will fund the exploration of pre-salt oil to the tune of $200-$220 billion (£140 billion), and will allow the firm to enter into any number of joint ventures with third parties capable of extracting oil. However, one of the major stipulations is that Petrobras will maintain a minimum of 30 per cent share in every exploration agreement it enters into.

Posted by Rupesh Govindan at 6:39 PM No comments: Links to this post

Sinopec will team up with Petrobras to develop offshore areas of the Para-Maranhao basin in northern Brazil after negotiating for a year. Petrobras is planning to invest $224 billion in the five years through 2014, the largest spending plan of any oil company, to increase oil and gasoline output. “Petrobras is seeking international partners because as its production is expected to double in the next 10 years to reach 4 million barrels per day", said Petrobras’ CEO Gabrielli. He said Petrobras' strategic planning foresees the order of 169 platforms, 504 support vessels, 53 drills and 48 oil tankers until 2020. 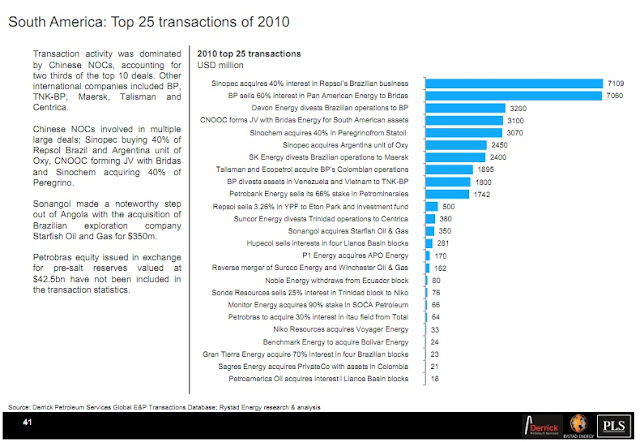 Source: Global E&P Transactions 2010 Review
In 2010, Petrobras announced a preliminary agreement to sell stakes in two blocks, BM-PAMA-3 and BM-PAMA-4, to Sinopec. Last October, Sinopec made an entry into Brazil by acquiring 40% interest in Repsol’s Brazilian business for $7.1 billion. “Sinopec is keen to expand its overseas oil and natural-gas operations”, said Sinopec President Wang Tianpu. The keenness is justified by the following snapshot. 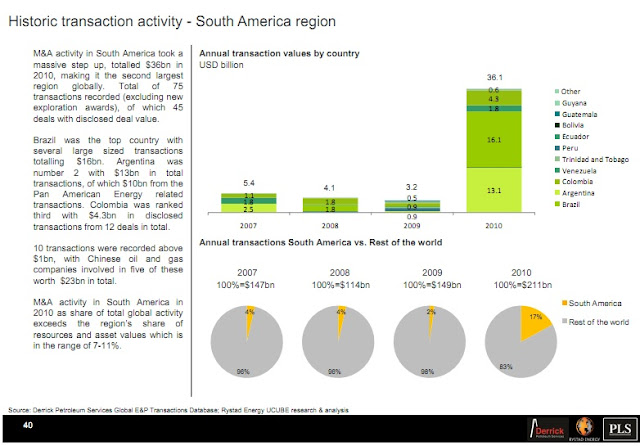 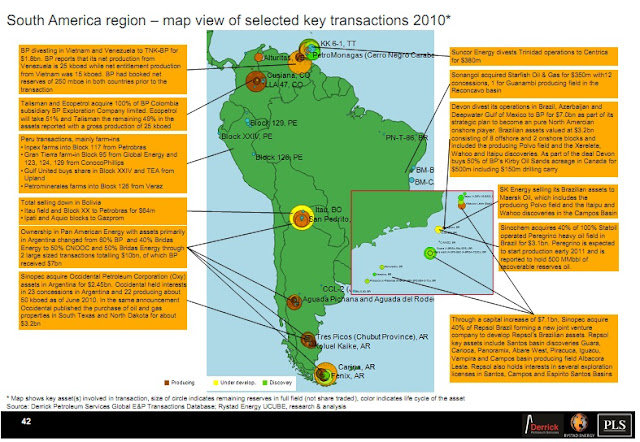 The 2010 M&A activity in South America took a gigantic step by clinching deals worth $36.1 billion, a 91% increase from 2009 value of $3.2 billion. South America accounted for 17% of the total 2010 M&A value of $211 billion and was ranked the second largest region globally for the M&A activity. Brazil was the top country with several large sized transactions totalling $16 billion. 10 transactions were recorded above $1 billion, with Chinese oil and gas companies involved in five of these worth $23 billion in total.
Brazil needs fund and China needs oil & gas resources to meet the growing demand. Here ends the story - Robust Collaboration between Sinopec and Petrobras. Expecting an even more aggressive activity from South America in 2011!
Try this free document search tool
Posted by Anitha Bharathi at 5:04 PM 1 comment: Links to this post

Posted by Kesav Gupta at 4:15 PM No comments: Links to this post

Posted by Kesav Gupta at 12:54 PM No comments: Links to this post