West Africa's Ghana emerging from the dust! Oil discoveries in Ghana so far..

Ghana is emerging from decades of unsuccessful oil and gas exploration to becoming one of the global exploration hotspots. Despite a few discoveries prior to 2007, there wasn’t much to talk about. However, the game changer turned out to be the billion barrel Jubilee oil field discovery in 2007 by Kosmos Energy, drilled by the Mahogany-1 well. This, as it turned out, was also extremely fortuitous because Kosmos was drilling a stratigraphic trap (more subtle to map) and not the easily identifiable structural traps. Locating and mapping these stratigraphic traps can potentially lead to world class discoveries, as the Jubilee discovery has shown, and as the other companies are also now doing. With exploratory success coming in Ghana, and subsequently along the West African coast, increasing attention is being focussed in this region, and it is becoming increasingly likely that huge reserves of hydrocarbons lie under the offshore. Ghana has led the way so far, and I have listed out all the oil and gas discoveries in Ghana to date. This list is sure to grow as more exploration picks up in this country. For a list of oil companies with plans to drill in West Africa click here. For a list of recent discoveries and companies planning to drill in Ghana click here. For a discussion on Angola’s oil industry and companies planning to drill in Angola click here. For a list of discoveries in Cote D'Ivoire and exploration plans in 2011 - 2012 click here. All data is from Derrick Petroleum’s extensive exploration and deals databases and Derrick Petroleum analysts.
Source: Derrick Petroleum
The following maps show the location of these discoveries 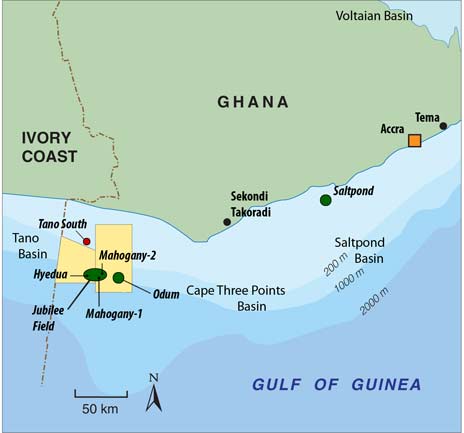 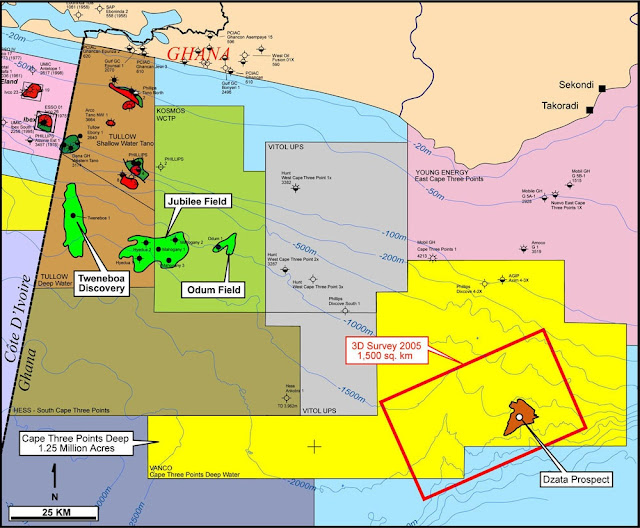 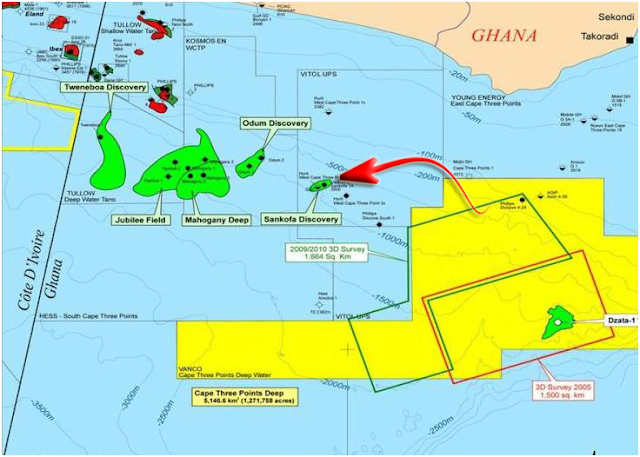 Source: Kosmos
NOTE: On 6 June, 2011, Kosmos Energy announced that the Banda-1 probe, drilled to a total depth of 4580 metres on the Banda Deep prospect by Atwood Oceanics’ semi-submersible Atwood Hunter, found hydrocarbons over a gross interval of 300 metres in Cenomanian-aged reservoirs. The interval contained more than 100 metres of low-porosity sandstone and three metres of 40 degrees-API oil pay. On completion, the well will be suspended and the rig moved to complete drilling of the Makore-1 well, which is targeting Turonian age reservoirs in the south of the licence. The well was drilled in the West Cape Three Points Block. Kosmos (30.875%) is operator and partners are Anadarko (30.875%), Tullow (22.896%), EO Group (3.5%), Sabre Oil and Gas (1.854%) and GNPC (10% carried interest).
Posted by Sanjay Samuel at 6:02 PM