Cote D’Ivoire: Oil and Gas discoveries and status of exploration activity in 2011 – 2012

The Cote D'Ivoire is a country in West Africa, economically dependent on agriculture and related activities, which engage roughly 68% of the population. Cote d'Ivoire is the world's largest producer and exporter of cocoa beans and a significant producer and exporter of coffee and palm oil. Events in recent years have included severe unrest caused by political developments. On 28 November 2010, Alassane Dramane Ouattara won the presidential election, defeating then President Laurent Gbagbo, who refused to hand over power, resulting in a 6-month stand-off. In April 2011, after widespread fighting, Gbagbo was formally forced from office by Ouattara supporters with the support of UN and French forces. Several sanctions were put on the country by the UN, AU (African Union) and the EU among others, to assist in removing Gbagbo from power. Several thousand UN troops and several hundred French remain in Cote d'Ivoire to support the transition process. Ouattara was sworn in as president in May 2011, and sanctions imposed on the country have slowly been lifted.
This post lists the discoveries in the Cote D'Ivoire and exploration plans of companies looking to strike it big in this year and the next. For a list of West African oil discoveries in 2010 - 2011 click here. For information on Angola (South West Africa), click here. For a list of recent discoveries and exploration plans in neighbouring Ghana, click here, and for a list of all discoveries in Ghana click here. All information has been sourced from Derrick Petroleum's extensive exploration and deals databases. 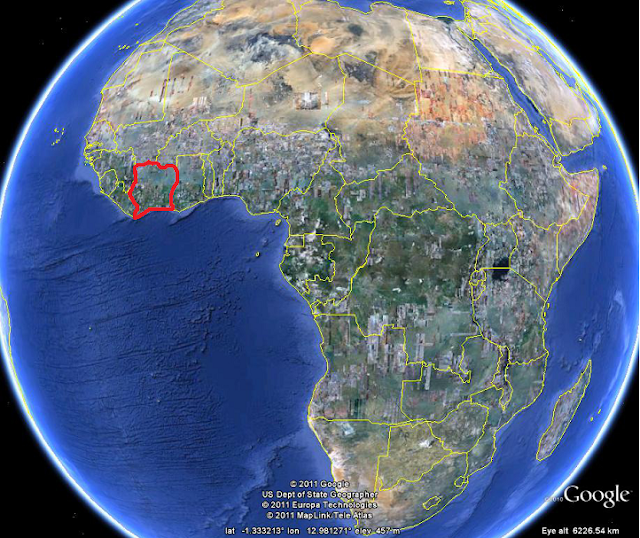 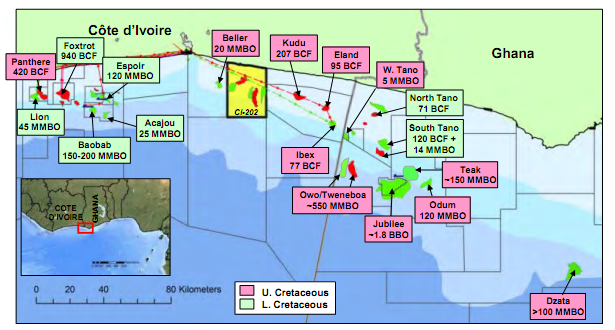 Cote D’Ivoire Oil and Gas discoveries. Source: Rialto
Fiscal Terms and Political Environment
o    Production Sharing Contract operating continually since the 1970’s
o    Full lifecycle cost recovery of expenses includes CapEx and OpEx, unrecovered costs carried forward for future recovery
o   Production bonuses payable on milestones
Companies Drilling in 2011 – 2012
The information presented here is from the Derrick Petroleum Planned Exploration Wells Database which is the only database in the industry that tracks actual exploration drilling plans and not just license drilling commitments. The database will be useful to E&P companies for identifying farm-in opportunities and to oilfield services companies for identifying sales opportunities. It is also extremely useful as a research tool to keep track of exploratory drilling by region or company.

Companies with plans to drill in Cote ‘d’ivoire. Source: Derrick Petroleum Planned Exploration Wells Database. [FM] = Force Majeure announced.
CI – 205
Block CI-205 is located in the Gulf of Guinea, offshore Cote d'Ivoire in the Tano Basin with proven oil and gas potential. It lies 15 km from the Baobab oil field, the largest in Cote d'Ivoire. The block covers an area of about 2,600 sq km. 4,900 km of 2D seismic and 2,400 sq km of 3D seismic surveys have been completed. The block is in its second phase of exploration which requires the consortium to drill one exploration well. The consortium planed to drill a well in 2010 using the Transocean drillship Deepwater Pathfinder. However on the 4th of April 2011, the operator, Lukoil Oil Company announced Force Majeure on operations on the block. It is likely that the well will be drilled in 2012 after normal operations resume. The partners are:
* LUKOIL Group: 63% (operator)
* PETROCI Holding: 10%
* Oranto Petroleum: 27%

CI-401 & CI-101
Blocks CI-101 & CI-401 are located on the continental shelf of the Republic of Cote d'Ivoire, in the deep-water zone of the Gulf of Guinea. A total of 1,100 sq km of 3D seismic study has been completed on the blocks in 2007. In April 2010, the consortium drilled its first exploration well Orca-1x-bis on Block CI-401. Block CI-401 occupies an area of about 929 sq km. The well penetrated the targeted objectives and discovered thin sandstone reservoirs. The well is temporarily plugged and abandoned. A second exploration well on CI-401 is planned to be drilled in Q1 2012. The location for the next exploration well on Block CI-101 has been defined, with the well is planned to be drilled in 2011. Force Majeure over these blocks was declared on April 4th 2011. Partners in the block are:
* LUKOIL Group: 56.66% (operator)
* Petroci Holdings – 15%
* Vanco Energy – 28.34%
CI – 202
CI-202 covers an area of 675 km² and is located just 30km to the southeast of Abidjan, the primary commercial centre of Cote d’Ivoire, extending from the coastline to water depths of almost 1000m. The block is a highly prospective petroleum exploration licence that contains multiple pre-existing un-appraised oil and gas discoveries.  The block contains a significant database of 13 wells, two 3D seismic surveys and over 20 production tests which have produced gas up to 37mmscf/day and oil over 2200 bopd.  These discovery and appraisal wells are located in shallow water depths of 25m to 85m and represent a high value and low unit technical cost production opportunity. The consortium is planning to drill three to six exploration and appraisal wells on the block in 2011. Partners in the block are:
* Rialto Energy – 85% (operator)
* Petroci (15%)
* ACC Holdings (21.25%)
CI-100
CI-100 block is located about 100 kilometres south-east of Abidjan in water depths ranging from 1,500 to 3,100 metres and covers an area of about 2,000 sq km. An initial 3D seismic survey has already been carried out by Yam’s Petroleum. Exploration work will include a new 1,000 square-kilometre 3D seismic survey, which will complete coverage of the block, and a first drilling, in 2012 at the latest. CI-100 is located directly west of acreage held by Dana in Ghana where the company made an oil discovery in March 2000. Partners in the block are:
* Total – 60% (operator)
* Petroci - 15%
* Yams Petroleum – 25%
The area has been much derisked with substantial finds in the region and in neighbouring Ghana and Sierra Leone. There is a lot of excitement and anticipation about the results of drilling this year and the next. Although developments in Cote D’ivoire have pushed off exploratory drilling by a few months, the stage is now set for  companies to resume operations, as most sanctions against the country have been lifted. Force Majeure was declared on some blocks by companies due to unstable and violent conditions. However, it is a matter of time before operations resume. It seems more likely than not, that drilling is going to introduce the country to significant additional reserves, and propel the Cote D’Ivoire into a significant oil and gas exporting country.
Posted by Sanjay Samuel at 6:33 PM