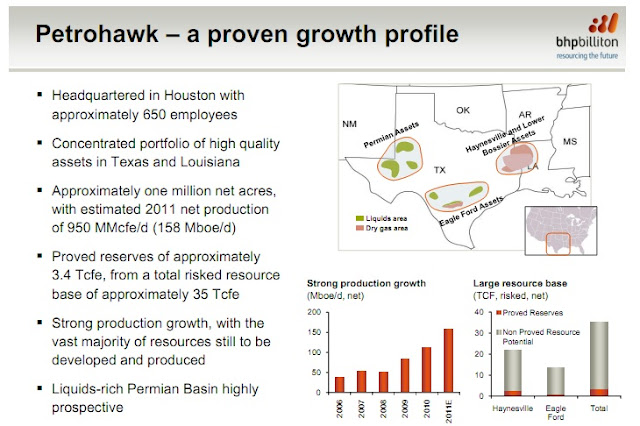 Valuation of the assets being acquired
A look at the split up of deal vale paid for the Haynesville, Eagle Ford and Permian assets-

Benefits for BHP Billiton:
BHP’s acquisition of Petrohawk is the largest unconventional deal this year, the previous one happened when ExxonMobil bought XTO in 2009. This $15 billion deal has been followed by its recent entry into US shale business by acquiring Chesapeake’s Fayetteville assets for $4.8 billion. With these two back to back unconventional deals, BHP has set itself a strong foundation in unconventional business.

The following are the benefits for BHP through this acquisition. 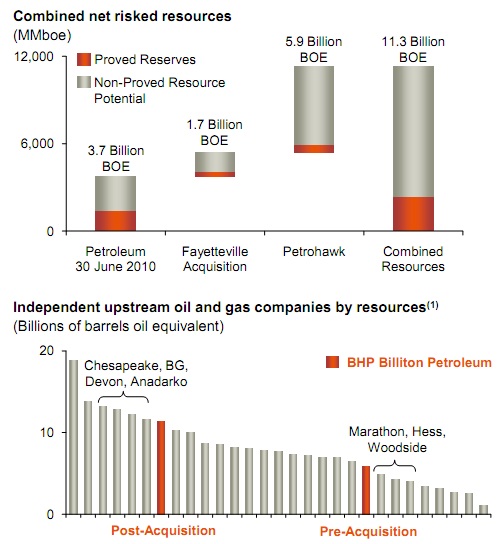 Shale market is ROBUST
The unconventional market in US has seen a total deal volume of ~$33 billion since the beginning of this year against the last year volume of ~$17 billion with the same number of deal count. The following interactive charts show the unconventional deals in the past one year sorted by deal value and region.
By Deal Value
Powered by Tableau
By Region

There are 20 opportunities recorded in Derrick’s “Deals in Play’” database for the region of North Africa comprising Algeria, Egypt, Morocco, Mauritania and Egypt.

Powered by Tableau
Figure 1: Map of North Africa with locations of opportunities shown by colored circles. Circles are colored based on the asset type. Place cursor over circles for additional information on the opportunity. Click on circles to get detailed opportunity break down (pop ups need to be allowed).

Powered by Tableau
Table 1: Derrick valued deals are shown with their asset types (transaction type), deal value and country. Squares are colored according to hydrocarbon type. Place cursor over squares for additional information on the opportunity. Click on circles to get detailed opportunity break down (pop ups need to be allowed), asset information and deal value.

North Africa presently accounts for 29% of total opportunities present in Africa
Posted by Sanjay Samuel at 5:43 PM No comments:

Although the hunt for oil in Uganda dates back to the 1920’s, commercial discoveries have only been made in the last 5 years. The dominant player by far has been Tullow Oil which has had proven discoveries of a billion barrels with yet to be drilled (P50) estimates of another 1.5 billion barrels. The discovery of these significant reserves has ushered in a new chapter in Uganda’s development, and generated renewed interest in the petroleum potential in the country. Uganda has 10 exploration blocks that run from the Sudan border in the north through Lake Albert on the western border with Democratic Republic of Congo and south to Lake George.  However, only 5 blocks have been licensed. The other blocks are due to be licensed after the government completes a new regulatory framework over oil exploration. These blocks are Blocks 3B, 3C, 3D and 4A. The government has said it is planning a new licensing round later this year and is offering 5 blocks.
Tullow initially planned to have first oil production by 2011, but tax disputes between the newly acquired Heritage Oil and the Ugandan government have led to a delay with first oil now expected to flow in 2012. The other 2 players who have been active are Tower Resources and Dominion Petroleum. However, these companies have so far been unsuccessful with limited drilling attempts.
The status of exploration activity in Uganda and exploration plans for 2011 and 2012 is looked at below.
The following table is an extract from Derrick Petroleum Services “Exploration Database” which here shows limited information about exploration drilling in Uganda in 2011 and 2012. Further information on ownership and recent activity is provided below the table and map that follows.
Source: Derrick Petroleum Services ‘Exploration Database’ 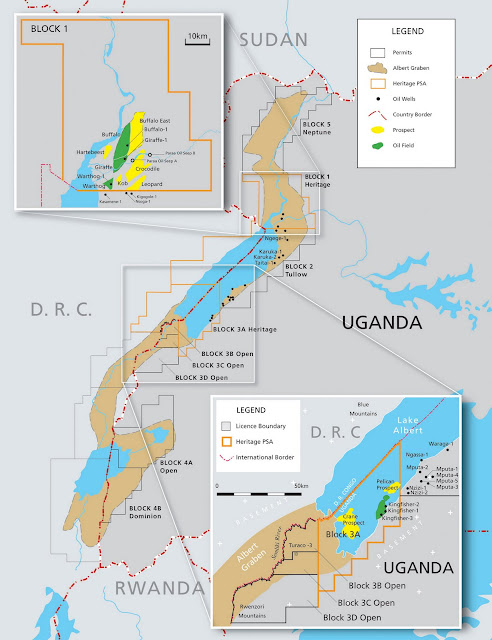 Figure 1: Map of blocks and hydrocarbon fields in Uganda. Source: Heritage Oil & Gas. Note: All Heritage blocks in map have been acquired by Tullow Oil.
Block 3A
Tullow Oil operates this block with 33.33% interest with partners CNOOC and Total also having 33.33% interest each. The Kingfisher-1 well was drilled in 2006 and subsequent appraisal has shown this to be a major field with the Kingfisher-3 well establishing 200 million barrels of recoverable reserves. 2 other prospects, the structurally attractive Pelican prospect and the large Crane prospect have been mapped on seismic and were announced to be drilled in 1H 2010. However, at the time of writing they are yet to be drilled, and pending further announcement it is likely that this will occur only in 2012.
Block 1/ Exploration Area 1 (EA1)
Tullow Oil also operates this block with 33.33% interest and with partners CNOOC and Total also having 33.33% interest each. Block 1 or Exploration Area 1 (EA1) is located at the northern end of Lake Albert, onshore Uganda and covers an area of 3659 sq kms. A successful 3 well drilling program (Warthog-1/Ngiri, Buffalo-1/Jobi-1 & Giraffe-1/Rii) was completed in 2008 unlocking a billion barrel potential in the Block. This was said to be the largest onshore oil discovery in Sub-Saharan Africa in over 20 years. This was followed by the drilling of the Ngiri-2 well in 2010. 2 wells were drilled in 2011, the Jobi-East-1 (to test the Jobi East prospect adjacent to the giant Jobi-Rii oil field )and Mpyo-3 appraisal well.
Jobi-East-1 discovered 20 metres of net hydrocarbon bearing reservoir.  Successful logging and sampling operations confirmed the presence of oil in two zones of high quality reservoir totalling 15 m of net pay. In addition, gas was also logged and sampled within sands totalling 5 m of net pay. The well was drilled by the OGEC RR600 and reached a total depth of 563 m. It has been suspended allowing for future re-entry to conduct production testing operations. An accelerated drilling campaign comprising up to four Jobi-East appraisal wells is planned for the second half of 2011 to assess the full extent of this important new oil accumulation.
The Mpyo-3 well intersected 21 m of oil bearing reservoir sands at a depth of 340 metres. The well was drilled 1.6 km southeast of Mpyo-1 in a down-dip location within a fault block adjacent to the Mpyo-1 discovery. Successful logging operations confirmed the sands to be of good quality and that they contained highly viscous oil similar to that encountered in Mpyo-1. The well was drilled by the OGEC IRI-750 to a total depth of 513 m and was suspended allowing for future re-entry to conduct production testing operations.
Pending further announcement, it is unlikely that any new exploration wells will be drilled on this block in 2H 2011. However upto 4 Jobi East appraisal wells are planned to be drilled in 2011.
Block 2/ Exploration Area 2 (EA2)
Tullow Oil also operates this block with 33.33% interest and with partners CNOOC and Total also having 33.33% interest each. Block 2 or Exploration Area 2 (EA 2) covers an area of about 3,900 sq km and is located on the eastern edge of Lake Albert of Butaiba region in Uganda. Tullow Oil has planned an eight-well program in Block 2 which commenced in March 2008. Out of the eight wells, two were drilled in 2008 and five were drilled from Q1-Q3 2009 with the last well expected to be drilled in late July 2009. Karuka-2 and Nsoga-1 exploration wells were drilled in Mar & May 2009 respectively. Nsoga-1 was a commercial discovery. Elsewhere in Block 2, Ngassa-2 was also drilled around the same time and in September 2009 it discovered oil. The well has been suspended as an oil producer. Kigogole-3 well was drilled in June 2009 and was suspended as a future producer. Wahrindi-1 was drilled in July 2009 and it encountered four meters of net oil pay. The last well, Ngara-1 was completed in August 2009 and was suspended as a future oil producer. According to Tullow, the Butiaba E&A prospect is scheduled to be drilled in 2011 on Blocks 1 and 2.
Block 5/ Exploration Area 5 (EA5)
Block EA5 is a 6,040 sq km license area situated at the northern end of the Albertine Graben in northern Uganda. The first exploration well, Iti-1 was completed in June 2009 and was found to be dry. The second well, Avivi-1 was spudded on February 13, 2010 and also failed to encounter hydrocarbons. Tower Resources operates the block with 100% interest although Global Petroleum, which funded most of the cost of Iti-1 and 25% of the cost of Avivi-1, has earned the option to take a 25% interest in the license. In May 2011, Tower Resources announced that a seismic survey is ready to begin so that a well can be drilled before the end of 2011.
Block 4B/ Exploration Area 4B (EA4B)
Exploration Area 4B or EA4B covers an area of 2,021 sq km in the Lake Edward and Lake George segment of the Albertine Graben. The adjacent basins, Southern and Northern Lake Albert and the Pakwach, have been the sites of several major oil discoveries, including those of the Kingfisher, Warthog and Buffalo-Giraffe (Jobi-Rii) fields. In November 2008, Dominion completed the acquisition of 371 kms of 2D seismic data onshore and 130 kms on Lake Edward. According to their July 2009 update, Dominion had identified four ready-to-drill prospects in this block which had an unrisked gross recoverable resource potential of 378 mmboe. The first exploration well Ngaji-1 was spudded on the block on June 21, 2010. However the well did not encounter any significant hydrocarbons in it. Dominion Petroleum operates the block with a 100% interest. As of July 2011, Dominion's current exploration efforts in this area are focused on two prospects: Prospect B, with 49.4 mmboe net prospective P50 resources; and the Izzy Prospect, with 83.7 mmboe net prospective P50 resources (management estimates). In 2011, Dominion intends to acquire 300-500 km of new 2D seismic in the Lake Edward Basin as well as carry out a surface geochemistry survey. It is assumed that the 2 prospects mentioned above will be drilled in 2012 after processing and interpretation of seismic and analysis of geochemistry data.

For more presentations on "Uganda", use our oil and gas document library:

Powered by Derrick Petroleum Services
Posted by Sanjay Samuel at 3:46 PM No comments: 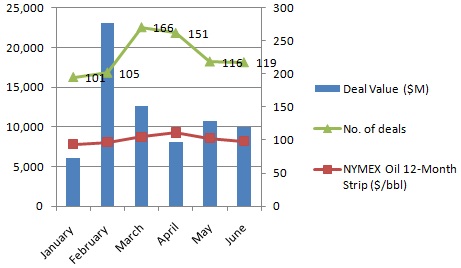 
The study on the 2010 and 1H-2011 transactions says that Asian companies like CNOOC, PetroChina, Mitsui, KNOC and Marubeni are really keen on shelling out dollars on the North American shales. Looking ahead, Asian investors are expected to be the most active buyers in 2011, followed by the North American firms or other IOCs.
Deal activity by Country/Region in 1H-2011


Powered by Tableau
United States:
United States has contributed the maximum or 39% of  the total deal volume. It is observed that many new comers including BHP made an entry into to the US Shale market. In addition, Eagle Ford acreage metric has reached a new benchmark level of $20,000-$24,000/acre.
Following are the significant deals in US in 1H-2011:
Quick look at the metrics in US


Powered by Tableau
Canada:
Canada has contributed 10% of the total deal volume. It has been a busy year with respect to Montney shale formation. Much expected $5.4 billion deal of Petrochina acquiring 50% interest in Encana’s Cutbank Ridge assets was lapsed. However, Encana has again initiated a sale process regarding the same assets and few other unconventional assets in Canada.
Following are the significant deals in Canada in 1H-2011:
India

With very few deals, India has contributed 13% of the total deal volume. $7.2 billion alliance between BP and Reliance was the positive news for the entire E&P sector for India.
Following are the significant deals in India in 1H-2011:
Africa:
Africa has contributed 12% of the total deal volume inspite of the political unrest that broke in the early 2011.
Following are the significant deals in Africa in 1H-2011:
2011 Outlook
Although, 1H-2011 deal volume is relatively low when compared to 1H-2010, it is expected that the 2H-2011 will make up the year with approximately $50 billion worth of assets available for sale. There are few significant packages available from Encana, ConocoPhillips, Chesapeake, Apache, Eni and Nexen. The following interactive chart shows the top ten Deals in Play.
Powered by Tableau
Statistics of the upstream deals announced in 1H-2011 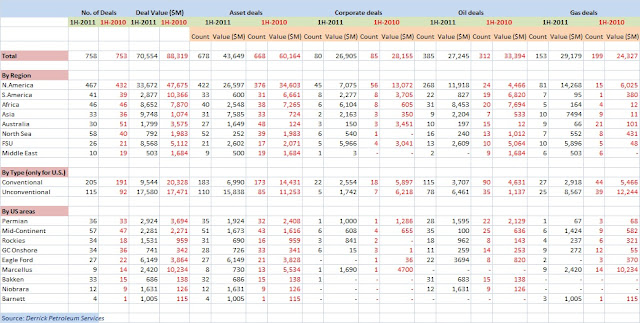 Click the table for enlarged view
Note: 1H-2011 M&A review is based on Derrick Petroleum Services’ Global E&P Transactions Database which includes information and analyses of all worldwide E&P transactions.
Posted by 1Derrick at 11:13 AM No comments: