In 2010, India’s state run Oil & Natural Gas Corporation (ONGC) has made significant finds in the Krishna Godavari (KG) basin, which is right next to the KG-D6 block of RIL in the K-G basin, off the east coast. ONGC is aiming to develop the KG basin assets through four different projects. The G-1 and GS-15 integrated development followed by the S-1 and Vasistha deep-water development, exploitation of discoveries in the KG-DWN-98/2 block and Project Manik, involving the oil finds. 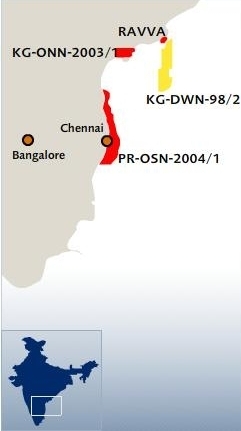 The blocks are divided into two discovery areas - the Northern Discovery Area (NDA) consisting of the Padmawati, Kanakadurga, Annapurna, N-1, D/KT, U, A, W and E gas finds in water depths ranging from 594m to 1,283m and the Southern Discovery Area (SDA) consisting of the UD-1 discovery falls in ultra-deepwater with a depth of 2,841m.
KG-DWN-98/2, which has 10 gas discoveries, was awarded under the New Exploration Licensing Policy, which allows ONGC to farm out a participating interest to foreign firms. In 2010, ONGC had asked foreign firms to submit proposals to buy a stake in the block. Cairn India is already a 10 per cent partner in the block.
“Giving away more will result in losing control and, in turn, our decision-making ability. We want an international partner who can get us the technology for deep-sea exploration. Both BG and ENI have it. These players are experts in deep water and know exactly how to go about the routine of the block,” said, one of the board members, ONGC. He added the discoveries in KG-DWN-98/2 and three in adjacent blocks together hold 6.37 trillion cubic feet (tcf) of in-place reserves. RIL’s KG block holds in place reserves of 11.3 tcf.
In February 2011, BP agreed to buy a 30-percent stake in 23 oil and gas blocks owned by Reliance Industries for $7.2 billion, as part of a long-term deal that involves a total investment of $20 billion. Nearly four months after RIL signed a deal with BP for getting BP’s technology for deep-sea exploration.
To know more about Reliance-BP's $7.2 billion deal, CLICK HERE
Block 1G was given to ONGC on nomination basis. It cannot sell stake to any firm and can at best involve a foreign firm as a service contractor. ONGC has partnership with BG India in three blocks in KG offshore, two operated by ONGC and one operated by BG. Petrobras and ENI have also partnership in one block each.

For more presentations on "KG Basin", use our oil and gas document library:

ONGC has entered into a period of exploration for appraisal after completing the exploration MWP commitments in block KG-DWN-98/2. The company plans to start producing 25-30 mscmpd of gas from the block in 2016-17.
Source Documents:

ONGC to sell 30 percent stake in KG block
View more documents from derrick_anitha
Posted by Kesav Gupta at 6:22 PM No comments: Links to this post

Laredo Petroleum LLC has agreed to acquire Broad Oak Energy Inc, whereby Broad Oak will become a wholly-owned subsidiary of Laredo in exchange for aggregate consideration of approximately $1 billion. This is the biggest deal in the Permian Basin so far in 2011. This merger will make the combined company a leading player in the Permian Wolfberry oil play alongside Laredo's well established presence in the liquids-rich Granite Wash play.
Is the combined company planning for an IPO?
Both Laredo and Broad Oak are privately held companies formed in partnership with their management teams by affiliates of Warburg Pincus LLC. Through this merger, is there an IPO coming up from Laredo's side??

Broad Oak Energy Inc is a privately held oil and gas exploration and production company with a particular focus on the Permian Basin of West Texas. Broad Oak has assembled approximately 65,000 acres in the Wolfberry play of the Midland Basin. Assets include both infill and extension drilling prospects targeting a 3000 ft. proven producing interval that comprise Upper and Lower Spraberry, Dean and Wolfcamp reservoirs. Broad Oak has drilled over 200 wells and plans to drill 120 wells during the second half of 2010. The following map shows the operated producing assets of Broad Oak and Laredo Petroleum. 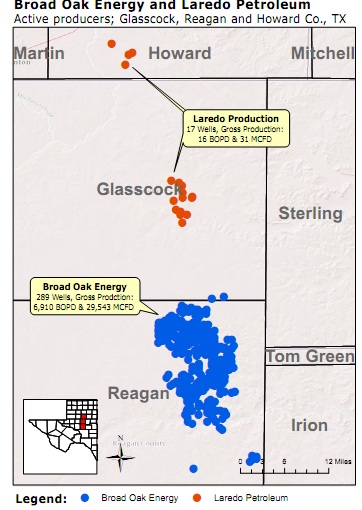 The following is the gross production profile of  Broad Oak operated assets. 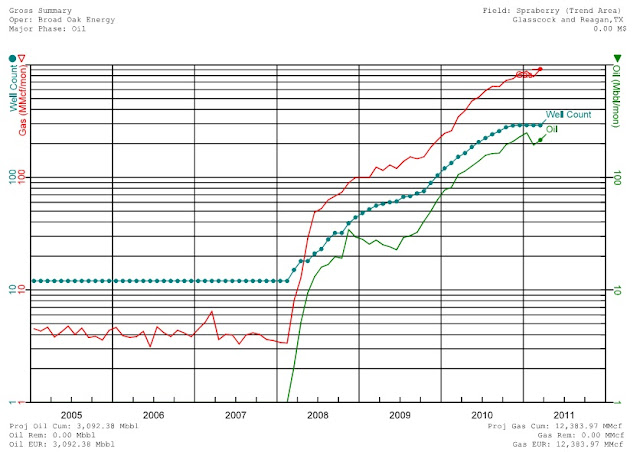 For more presentations on "Permian Basin", use our oil and gas document library:

Deals by key operators in the Permian Basin
Note: The graph is interactive
Powered by Tableau
Here are the significant Permian Basin deals of 2010 where the $/flowing barrel equivalent was around $100,000.
-- Apache acquires BP assets in Permian Basin for $3.1B
-- Concho Resources and Apache acquire assets of Marbob Energy for $1.65B
-- SandRidge Energy acquires Arena Resources for $1.3B
-- Oxy acquires Yates Drilling Co for $1.1B


Comparison of the deal activity by US sub-regions
Note: The graph is interactive

Powered by Tableau
The Permian Basin received the highest production multiples, $80,000-$110,000 per flowing barrel equivalent. The metrics reflect the premium buyers are willing to pay for oil reserves; future drilling opportunities, behind pipe potential and reserve quality.
The first 5-month results of 2011 show the total value of Permian Basin deals to be $2.3 billion with an average production metrics of ~90,000/daily BOE. There are a few Permian Basin packages put up for sale by Element Petroleum (brokered by BMO Capital), Piedra Resources (brokered by RBC Capital) and Parallel Petroleum (brokered by Scotia Waterous). These packages, being mandated by major advisors, are to make huge money to the Permian Basin for this year.

View more documents from derrick_anitha
Posted by 1Derrick at 5:53 PM No comments: Links to this post 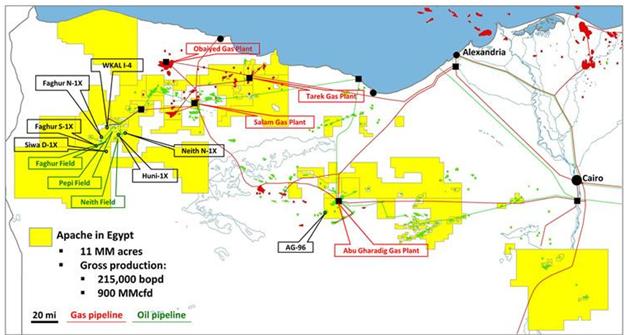 Exploratory wells being drilled by Apache as operator globally in 2011. Source: Derrick Petroleum Planned Wells Exploration Database. The table does not include exploration wells where Apache is partner but non-operator.
Apache had earlier in 2011 redeployed all non-essential expatriate personnel and all expatriate dependents from Egypt. However, key expatriate personnel remained in-country to work alongside Egyptian national personnel to manage ongoing production operations. Apache's production, located in remote locations in the Western Desert continued uninterrupted.
Earlier in 2011, the Siwa-D-1X well drilled in the Siwa Concession pushed Jurassic and Cretaceous plays farther south and westward and will lead to follow-up exploration prospects. Apache expects to commence production from the well upon approval of a development plan later in 2011.
Apache also said that the the Tayim West-1X discovery in the West Kalabsha Concession represented the first Paleozoic success found in a reservoir separate from the younger proven Jurassic and Cretaceous sands and opens up the area to further deep tests in upcoming wells. The discovery is currently on production.
Apache's current gross operated production in Egypt totals approx. 215,000 barrels of oil and 900 MMcf of gas per day, including 40,000 barrels of oil per day from the Faghur Basin.
Click here for Apache's press release on the 5 discoveries.

For more presentations on "Apache", use our oil and gas document library:

Powered by Derrick Petroleum Services
Posted by Sanjay Samuel at 12:22 PM No comments: Links to this post