http://docsearch.derrickpetroleum.com/pageNav/view1/q/Chesapeake/docId/10838-0000/Chesapeake_2011_March_Investor_Presentation.html
Posted by 1Derrick at 7:16 PM No comments: Links to this post

http://docsearch.derrickpetroleum.com/pageNav/view1/q/MArathon+oil/docId/10743-0000/Marathon_Oil_2010_Annual_Report_Form_10_K.html
Posted by 1Derrick at 7:13 PM No comments: Links to this post

http://docsearch.derrickpetroleum.com/pageNav/view1/docId/10642-0000/ConocoPhillips_2010_Annual_Report_Form_10_K.html
Posted by 1Derrick at 7:04 PM No comments: Links to this post

Anadarko signed a joint-venture agreement with KNOC, whereby KNOC will earn approximately one-third of Anadarko's 71% interest in the company's Maverick Basin assets, located in southwest Texas. KNOC's $1.55 billion investment will be made entirely in the form of a carry, funding approximately 100% of Anadarko's 2011 post-closing capital costs in the basin, and up to 90% thereafter until the carry is exhausted, which is expected to occur by year-end 2013. KNOC will also reimburse Anadarko for net cash outflows, relative to their acquired interest, subsequent to the effective date, which are expected to be approximately $50 million. The transaction differs from other recent joint ventures with the fact that there is no up-front cash consideration. 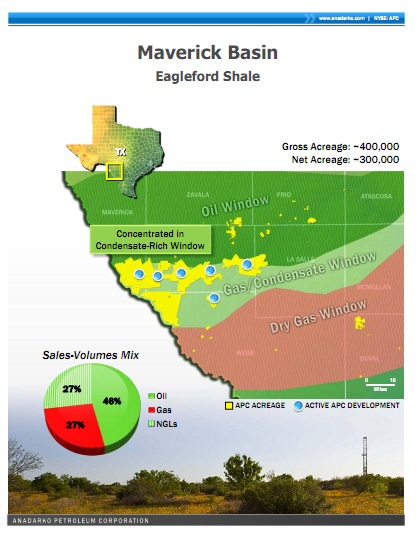 Through this JV, KNOC will receive:
-- Approximately 80,000 net acres in the liquids-rich Eagleford Shale play
-- Approximately 16,000 additional prospective net acres for the deeper dry-gas Pearsall Shale, as well as Pearsall opportunities underlying the aforementioned Eagleford acreage
-- Reserves of 116 million barrels of oil equivalent and production of 6,628 barrels a day.
A look at the Eagle Ford acreage metrics
KNOC is believed to pay ~$14,000 per Eagle Ford acre after allocating a value for the reserves and Pearsall shale acreage. This $14,000/acre is the highest price per acre paid till date in the Eagle Ford and represents a premium of 27% when compared with the recent Eagle Ford transactions. The following data source from Derrick Petroleum Services shows the acreage metrics of the 2010 Eagle Ford transactions.

Recently, KNOC acquired 95% of Altius Holdings Inc for $515 million. Altius Holdings owns four oil blocks in Kazakhstan- Akzhar, Besbolek, Karataikyz and Alimbai - with reserves totaling 56.9 million barrels, the South Korean ministry said. Altius is the Kazakh arm of Arawak Energy.
KNOC in shopping spree!!!
KNOC said in February that it plans to invest as much as $4 billion in overseas oilfields this year to secure supplies for an economy that relies on imports for almost all its oil needs. The company aims to raise daily output by 60,000 barrels to 240,000 barrels by the year-end. These two recent acquisitions may boost KNOC’s output by 16,500 barrels a day. KNOC Vice-President Kim Seong-hoon said, “KNOC is focusing on acquiring assets with high upside potential and little investment risk.” This is in line with their production milestone, with the acquisition train starting from Kazakhstan and US. The acquisition train might stop in US (Bakken and Niobrara shales) for a while or it might travel towards the upcoming oil frontiers like Brazil and West Africa.
Posted by Anitha Bharathi at 2:59 PM No comments: Links to this post