Posted by Kesav Gupta at 6:28 PM No comments: Links to this post

W&T Offshore Inc has agreed with private sellers to acquire approximately 21,900 gross leasehold acres (21,500 net acres) in the West Texas Permian Basin for a purchase price of $366 million. The reserves are over 91% oil and natural gas liquids. At January 1, 2011, estimates of proved reserves to be acquired are approximately 27 mmboe; and estimates of proved and probable reserves to be acquired are approximately 53 mmboe. The current wells produce around 2,800 barrel equivalents per day. Since the effective date of Jan 1, 2011, the proposed acquisition, production has increased from about 1,900 barrel equivalents.

The sellers have three active rigs drilling in the field and ongoing completions are being made on the new wells. There is significant upside potential in the acquisition with hundreds of proved undeveloped and probable well locations. Capital expenditures associated with planned development activities for these properties for the rest of 2011 are currently estimated at $35 to $40 million. 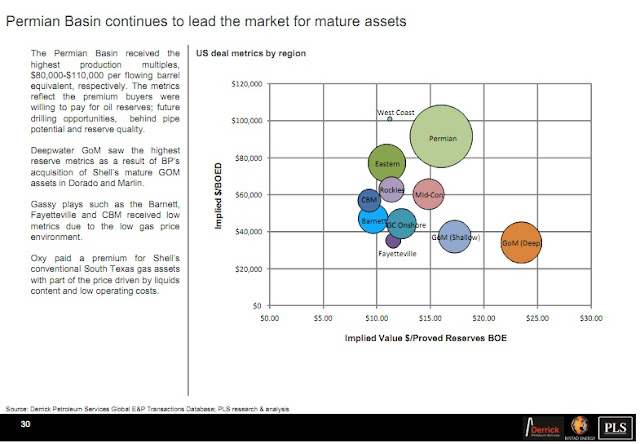 Source: Derrick Petroleum Global E&P Transactions 2010 Review
(Note: 2010 M&A report is available for free- If interested in getting a copy of the same, please write to anitha.bharathi@derrickpetroleum.com)

With the reserve life index to be 26 years, the $/proved reserves going at $10.67 is certainly high. The metrics reflect the high oil price and the buyers are willing to pay for oil reserves; future drilling opportunities, behind pipe potential and reserve quality.

Following is the list of significant deals in Permian Basin in the last three quarters.

Another private company, Element Petroleum LP has put its Wolfberry assets for sale. The following slide shows the overview of the package: 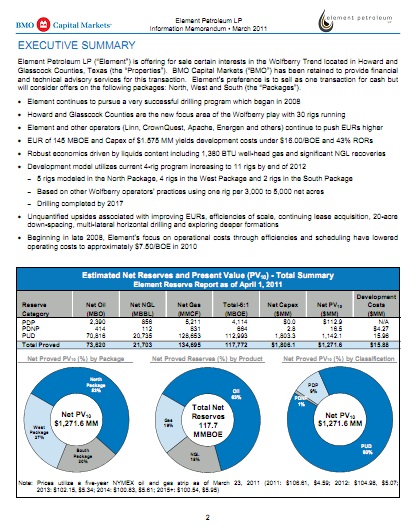 Posted by Anitha Bharathi at 2:44 PM No comments: Links to this post