Chinese oil fields are aging, their reserves‐to‐production ratios (R/P ratio) are low, and domestic oil production is nearing its peak. As a result, the country is almost entirely dependent on the  international oil market to meet incremental oil demand. China became a net oil importer in 1993. For the past 17 years, China has experienced strong economic growth, and recently became the second‐largest economy in the world. Even during the recent financial and economic crisis, China managed to achieve 8.7% GDP growth in 2009, and 10.3% in 2010. It requires a great amount of energy‐intensive raw materials and infrastructure to satisfy China’s expanding consumer demand, as well as the rest of the world’s demand for Chinese manufactured goods. This has stimulated output from heavy industry, which also received a boost from China’s recent stimulus spending on energy‐intensive infrastructure and buildings.

Most of China’s projected oil imports will continue to come from a small number of countries. In 2009, the top ten crude oil suppliers to China (in order of import volumes) were Saudi Arabia,   Angola, Iran, Russia, Sudan, Oman, Iraq, Kuwait, Libya and Kazakhstan. As many other net oil importers, especially in Asia, China relies heavily on suppliers in the Middle East with 47% of its total imports in 2009 originating from there . That high degree of reliance is unlikely to change, even though China has been diversifying supply to Africa, Central Asia, Latin America and Russia, where NOCs are seeking to expand their upstream activities.

China’s gas market is one of the fastest‐growing in the world, with a demand of 87.5 billion cubic meters (bcm) in 2009. It is expected to reach 200 bcm by 2015. China's natural gas production is reported to have reached 83 bcm in 2009. In the first half of 2010, China’s gas demand increased by 22% year‐on‐year, according to China’s National Development and Reform Commission (NDRC). The rest of the demand was satisfied through imports of LNG and the newly opened Central Asian pipeline that will eventually bring around 40 bcm of gas5 from Turkmenistan and possibly additional amounts from other countries. Reportedly, the draft Clean Energy Development Plan being prepared by the National Energy Administration (NEA) calls for the share of natural gas in China’s energy mix to rise sharply, from 4% currently to 8.3 % by 2015. CNPC estimates that gas demand could reach 230 by 2015, increasing to 250 bcm to 340 bcm by 2020. Even with vigorous exploitation of domestic onshore and offshore resources, including unconventional gas, much of the demand will be met by imports. 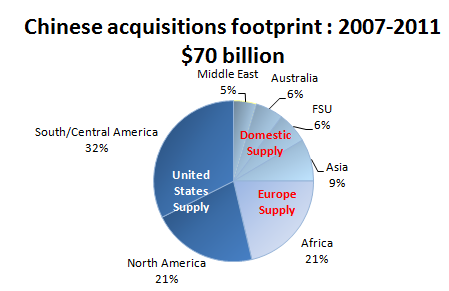 Through acquisition Chinese have ensured they have assets supply to domestic markets as well as major international markets.

Large Chinese acquisitions in the past

Posted by Rupesh Govindan at 7:44 PM