Eagle Ford Shale generated around $3 Billion in revenue in South Texas during 2010. A busy year expected for Eagle Ford Shale with $4.0 Billion worth opportunities up for grab!!!

In less than three years of development, the Eagle Ford Shale already accounts for over 6% of the Gross Regional Product for the 24-county South Texas area it encompasses, according to a study released by the Center for Community and Business Research at the University of Texas at San Antonio Institute for Economic Development. In 2010 alone, this newest of the Texas shale plays generated close to $2.9 billion in revenue and provided nearly $47.6 million in local government revenue.

In 2010 in the Eagle Ford, 1,018 drilling permits were issued through November, up from 94 the year before, and output of crude oil, condensate and other liquids nearly quadrupled to 3.9 million barrels, according to Texas Railroad Commission data. EOG, in 2010 averaged seven rigs in the Eagle Ford and drilled 110 wells. This year, it expects to have 14 rigs and drill 256 wells. Chesapeake, the largest leaseholder with 625,000 acres, also expects to double the dozen rigs it has working in the area. Petrohawk Energy also expects to spend more than twice as much as it did in the region in 2010. And ConocoPhillips, another major leaseholder, just leaped from seven to 11 rigs in the region. 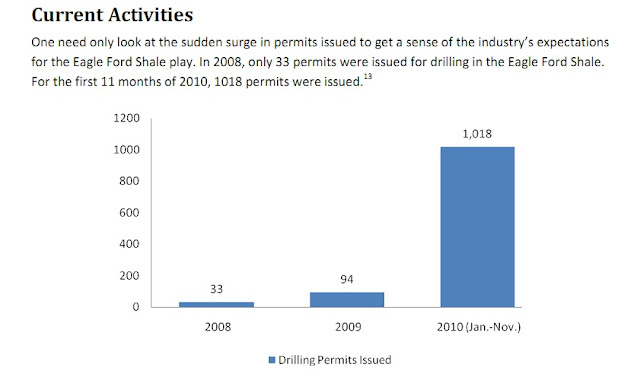 $4.0 Billion worth Eagle Ford opportunities up for grab!!!
Recently, the oil and gas companies of all sizes are trying to shift resources to the hunt for oil while natural gas prices remain weak. Therefore, Eagle Ford's large quantities of valuable crude oil and natural gas liquids will attract more interest and dollars in 2011.