Endeavour International posted 6.6% decline in O&G Production for Q1-2011; Poised for Significant Production Growth in the UK and the US

Endeavour is an independent oil and gas company and has operations in the North Sea and the United States. In May, 2009, the company completed the sale of its Norwegian subsidiary for US$150 million, and those proceeds combined with current cash flow will fund future growth initiatives. Endeavour is currently developing three field discoveries in the United Kingdom sector of the North Sea that will serve as the foundation for production growth over the next two years.

The company’s first quarter 2011 production was 3,001 boepd, down 6.6% over the same quarter last year. Though the company was not performed for the quarter, the pieces are in place for significant production growth and lower operating costs in the near future; the Bacchus UK oil development is moving forward and appears to be on schedule to start production in Q2-2011, with production expected to ramp-up to 4,000–5,000 bpd net to the company's interest. This more than doubles the company's current production rate. Meanwhile, the company continues to push forward many of its smaller, shorter cycle-time projects. 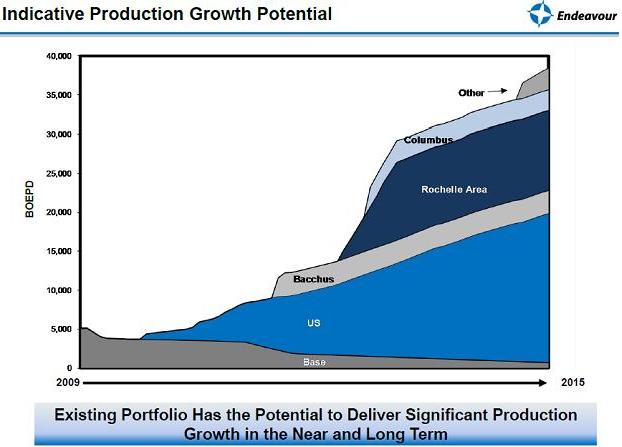 Source: Endeavour International
Poised for Significant Production Growth in the UK and US
Rapid Growth Expected Over Next Three Years:
Endeavour expanded into the US in 2010 with the purchase of lower-cost, shorter cycle time conventional and unconventional onshore reserves. As it brings its balanced portfolio of oil and gas properties on to full production, management expects to organically double annual production in each of the next three years.  END believes that its existing total reserves can produce 30,000 to 40,000 BOEPD by 2015. During 2011, capital expenditures of about $150 million will target its two key initiatives in the U.K. North Sea – Bacchus and Greater Rochelle and the remainder will be directed toward the Haynesville and Marcellus areas in the U.S. to bring on production.

Source: Derrick Petroleum E&P Transactions Database
Bringing North Sea Assets On-Line
In the Central North Sea, Endeavour has three primary development projects – Bacchus, Columbus and the Greater Rochelle area, which have the potential to significantly expand its production levels and total proved reserves over the next three years. The Company recently increased its working interested in Bacchus from 10% to 30%, giving it an even greater position in this near-term proven oil play.

Source: Derrick Petroleum E&P Transactions Database
Operating the Greater Rochelle Development toward First Production
In February 2011, the company received final approval of its Field Development Plan for East Rochelle from the Department of Energy and Climate Change (DECC). This is an important next step in moving the field toward first production in late 2012. In the fall of 2010, END also achieved commercial drilling success at West Rochelle confirming a second excellent quality reservoir.
Significant Reserve Growth Driven by the Drill Bit
During 2010, Endeavour grew its 2P oil and gas reserves by 12.3% to 43.7 MMBOE from 38.9 MMBOE, representing a 419% replacement of 2010 production. Production volumes averaged about 4,100 BOEPD during the year. END expects to generate significant production growth from its definable projects in the second half of 2011, with an opportunity to double its production flow rates in each of the next three years from its existing assets.