US top region on its own, South America new number 2 for Oil and gas M&A activity

Top region for M&A activity is North America with $112bn or 53% of world total (including GoM). This activity level is almost 2 times the region’s share of global production and asset values. US has consistently been the top ranked region in terms of deal value transacted. 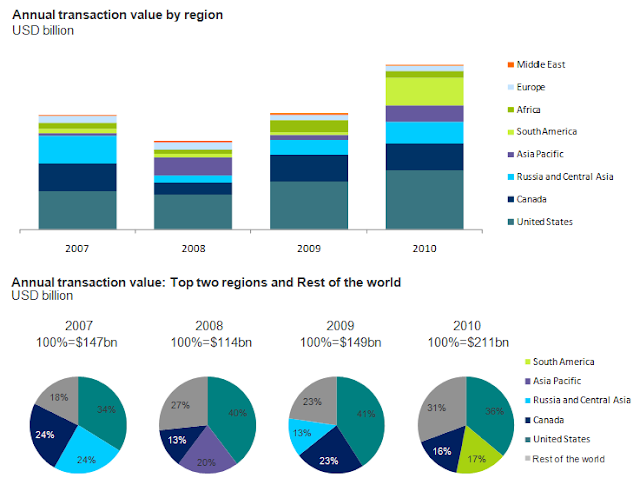 The second ranked region (after US) has been different each of the past few years – in 2007 it was Former Soviet Union as a result of the Yukos asset sell offs; in 2008 it was Australia because of the CBM LNG deals; in 2009 Canada took the position and in 2010 it is South America which has seen a massive step up in activity driven by Asian NOCs as well as OECD oil companies.
For more details look at http://www.derrickpetroleum.com/reports1.html
We have also recently published a report for E&P Business Development and New Ventures professionals working on deals globally. This report provides information on $93 billion of global oil and gas assets on the market.
The report provides details on ~500 opportunities:
·         Assets for sale
·         Corporate M&A opportunities
·         JV opportunities
·         Exploration farm-ins
You can view a sample copy of this report at http://www.derrickpetroleum.com/reports2.html
Posted by Rupesh Govindan at 9:55 AM