Chevron plans on investing $26 billion in 2011, with 87 percent of that amount expected to fund upstream activities

Chevron Corp, the second-largest U.S. oil company plans to take a measured approach to shale gas development despite a flurry of deals in the past year and the industry's huge ambitions for the emerging resource. 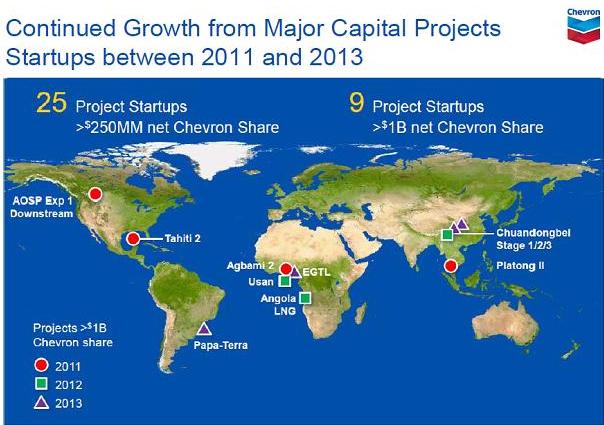 "You're not going to see Chevron -- I can't speak for others -- just shift the whole business into shale, and let other things go," Bobby Ryan, Chevron's vice president for global exploration, said at the Reuters Global Energy and Climate Summit in Houston on Wednesday. Ryan reiterated that Chevron's focus areas remained the Gulf of Mexico, West Africa and Western Australia, which were all part of a "balanced portfolio" approach to exploration.

Like Exxon and others, Chevron is exploring shale acreage in Eastern Europe, and will drill its first well in Poland this year. In the U.S. Gulf, Chevron recently got clearance for a few wells already under development, and its program includes 10 development and exploration plans and 15 drilling permit applications in various stages of approval or preparation.

For more presentations on "Chevron", use our oil and gas document library:

Powered by Derrick Petroleum Services
Chevron is set to drill 16 development wells and two exploratory wells at Jalalabad, Moulvibazar and Bibiyana gas fields in Bangladesh for the next one year. According to Petrobangla, Chevron submitted a US$ 350 million capital budget to carry out the plan. "To conduct the drilling operations we need one year as we have to construct concrete drilling pit, mobilize drilling rig and associated equipment, management and treatment of waste and decommissioning of rig and materials", Chevron official said.

Chevron has added 14 million acres to its portfolio, including the acquisition of Atlas Energy in the northeast United States, and deepwater opportunities in Liberia and China. Chevron’s queue of major capital projects, including Gorgon and Wheatstone in Australia. Over the next three years, 25 projects with a Chevron share of more than $250 million each are scheduled to start production, nine of which have a net Chevron share that exceeds $1 billion. Chevron has four major capital projects planned to start up in 2011.
Additionally, over the next three years, the company expects to make final investment decisions on 13 more projects, each with a Chevron share in excess of $1 billion. Construction on the Gorgon project is nearly 25 percent complete, with startup expected in 2014, and Chevron remains on schedule to reach a final investment decision this year on the Wheatstone project, with startup planned for 2016.
Chevron CEO, John Watson told, “Disruption fears are pushing up oil prices and chevron has $26 billion in capital expenditures slated for this year. When it comes to acquisition, it's all about the right opportunity. We are spending almost 90% of our capital dollars on the upstring, exploring and producing oil and gas, where we'll emphasize our growth and we have growth to add over the next five to seven years.”
Check this Video - Chevron CEO John Watson discusses 2011 Capital Expenditure Plan with CNBC: