West Africa is fast becoming a hotspot for the global oil and gas industry. A string of spectacular finds has shown this area to be a new petroleum province with multi billion barrel potential. The majors are there, and so are many smaller players. According to Derrick Petroleum’s “Deals in Play’ database, as of July 2011, there are 76 opportunities available and recorded in the whole of Africa . Out of this, 22 opportunities are in West and South-West Africa (Table 1).


Map: Opportunities are represented by the colored stars. Place cursor over stars for information. Subscribers can click the stars for detailed information from Derrick's "Deals in Play' database.

There are >20 opportunities recorded in the Derrick “Deals in Play’ database. By far, most opportunities are for exploration activity, followed by opportunities related to developing discoveries. One big M&A opportunity is recorded and some producing assets are put up for sale.  Equatorial Guinea and Angola have the most opportunities (4 each). In Angola, ExxonMobil is looking to exit Block 31 and INA-Naftaplin has put its assets up for sale for which combined deal values exceed $2 Billion according to Derrick Petroleum estimates.


The following figure is a breakdown of opportunities in Africa from Derrick's "Deals in Play' database. 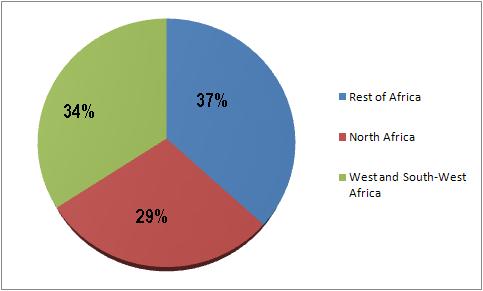 Posted by Sanjay Samuel at 4:49 PM