ExxonMobil plans to drill an exploration well on Block 119, off central Vietnam in April, potentially angering China, which has objected to similar plans in the past. China had earlier warned Phillippines against any oil exploration without its consent in waters it claims in the South China Sea after the Philippines announced plans for possible drilling.
South China Sea tops the list of most disputable topics of Southeast Asia. Where the lingering territorial dispute among Brunei , China, Malaysia , the Philippines, Taiwan, and Vietnam over parts or all of the  Spratly Islands in the South China Sea does not appear ripe for any near-term solution.
Block 119 is located off Danang city and the adjacent Quang Ngai province, the Vietnam News reported, but it was not immediately clear if the drilling was in a disputed area claimed by both countries.
Some of the current exploration projects situated in the South China Sea: 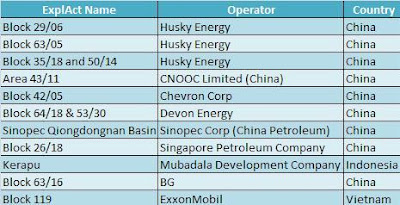 Source: Derrick Petroleum Planned Exploration Wells Database
China, which claims all of the South China Sea including the Paracel archipelago east of Danang, reportedly warned ExxonMobil to drop an exploration deal in the seas off Vietnam in 2008, though it is not clear if Block 119 was part of those objections.
Transactions that have taken place in the South China Sea in past few years: