ConocoPhillips slows down gas business and accelerates oilsands investment… Many more including Chesapeake and EOG are transiting from gas to oil!!!

ConocoPhillips’ Canadian president, Joe Marushack said, "ConocoPhillips Canada will go in full-speed ahead on its Alberta in situ oilsands investments this year while choking back spending on its natural gas business and maintaining support for liquids-rich conventional plays. The dramatic drop in gas prices, which at $4/MMBTU are a fraction of their level of several years ago, has forced substantial changes at the US energy giant. Late last year, it closed off the taps on 12% of its Canadian gas output for three months. ConocoPhillips is not the only company transiting from gas focus to oil focus but also other majors like Chesapeake, EOG Resources, etc., 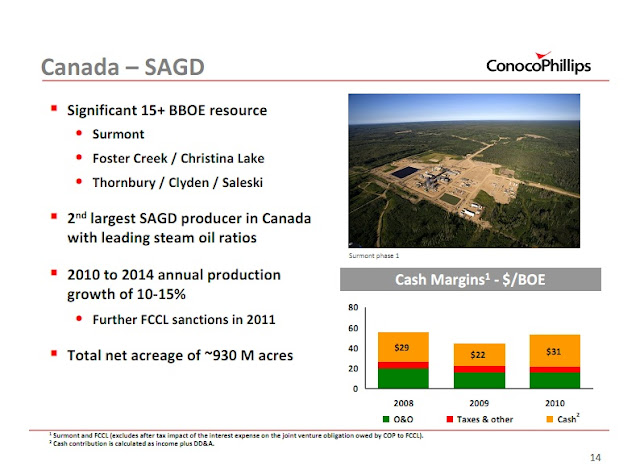 The company also intends to continue selling some non-strategic assets from its gas-heavy Canadian portfolio, although it's not huge numbers compared to the overall size of its operations. “If you go back to 2008, folks were drilling under the assumption of $8 gas. That’s a very different capital profile than what you’d use when you have $3.50 gas,” Mr. Marushack said.


The company’s primary focus remains on the oil sands, despite selling its 9% stake in Syncrude Canada– a transaction with Sinopec that netted it $4.65-billion. ConocoPhillips is investing heavily in developing new oilsands projects. Its expansion comes both through its 50% partnership with Cenovus Energy on several projects, and its Surmont development, which it owns with Total E&P Canada. Last year, ConocoPhillips began work on the second, 83,000 barrel-per-day phase of Surmont. The company is also spending heavily on new technology in the oilsands, where Mr. Marushack said improving environmental performance has become a key goal. Last month, ConocoPhillips, announced a $13.5-billion US capital budget for 2011, with about $6 billion to be spent on North American exploration and development. The following graph shows the trend of oilsands deals since 2006.. 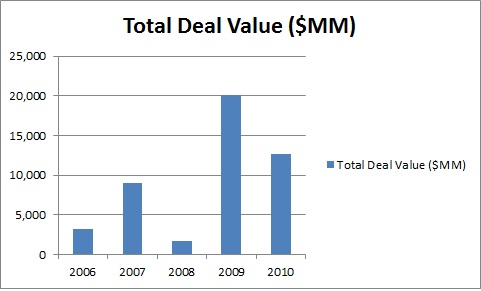 See the publications of ConocoPhillips: http://docsearch.derrickpetroleum.com/research/q/conocophillips.html
Posted by Anitha Bharathi at 5:38 PM