Appalachian honeymoon turns to lovers’ quarrel for Reliance and Atlas

April 2010 to be exact, Reliance won the hand of much-smaller Atlas, agreeing to pay $1.7 billion for a 40% joint-venture stake in Atlas’ big Appalachian leasehold on prime turf for the Marcellus Shale play. But before the year was out, Atlas’ board had also agreed to sell their entire company for $4.3 billion in cash (some shares) and assumed debt to Chevron, runner-up to Reliance in a field of 18 rivals in the JV beauty contest ushered for Atlas by Jefferies. The Chevron takeover goes to a vote by Atlas shareholders February 16.

Just as the proxy materials for that post-Valentine’s Day vote were going out, Reliance dropped a bombshell. In a January 10 letter to Atlas, Reliance CEO Walter Van de Vijver challenged the wisdom of Atlas’ board and questioned the behavior of Chevron and Jefferies. “We believe Reliance, as Atlas Energy’s JV partner and a company with substantial financial resources, would have been the most natural and obvious potential transaction partner for Atlas Energy,” Van de Vijver wrote. “This is especially true in light of the many assurances” by Atlas management about Reliance being its “preferred partner” if Atlas sought a “whole-company transaction.”
Instead, Reliance finds itself footing 75% of what will become Chevron’s Marcellus program, to the tune of $1.3 billion in drilling carries. 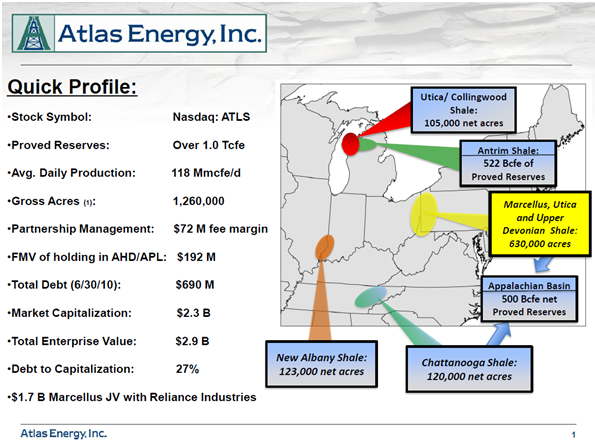 Where did this relationship go wrong?
Ask Jefferies. After representing Atlas in the JV search, Jefferies investment bankers made a routine call on Chevron about potential acquistions and later pitched Atlas as a candidate to Chevron last June. Chevron agreed to talks, if Atlas was interested. Their canoodling went on into mid-September, all without Reliance’s knowledge. Then Chevron demanded exclusivity to make a final offer. Even though that window ran out November 4, still nobody told Reliance Atlas was up for sale. Chevron’s belated bid came in at $38.25/share for Atlas, now worth about $43/share adjusted. That is ~50% over Atlas’ close on September 13 and a 37% premium to its price on the eve of the deal announcement November 8. Jefferies, which had begun by pitching Atlas to Chevron at a price between $70 and $102/share, delivered a fairness opinion on the Chevron offer to Atlas’ board. Using standard methods like prior deals and historic discount rates, Jefferies was able to rationalize a value for Atlas at half what it had first proposed. Reliance says that method left “a significant discount to the value attributed to the same assets in our joint venture.” Jefferies stands behind the fairness opinion, noting different methods gave similar results. Atlas also got a positive fairness opinion from Deutsche Bank. Chevron’s offer topped both the Jefferies and Deutsche Bank opinions. But together, the opinions make it look like Reliance overpaid. Some analysts report Chevron’s price equates to only about $9,000/acre for Atlas, minus the Reliance JV acreage
Neither Atlas nor Jefferies ever approached Reliance with a company sale offer despite Reliance’s aggressive JV interest. Nor did either let on to Reliance there were takeover talks with Chevron. SEC filings say Jefferies pitched the Chevron deal to Atlas’ board by noting Chevron was one of the few companies positioned to do such a deal, since other majors had already made or were considering big shale acquisitions. Jefferies argued Reliance would not be interested and was already tapped out. But then some say Jefferies at this point was working for Chevron on the buy-side, not for Atlas. Jefferies had no obligation to call Reliance.
Chevron had offered to make a premium bid if it got exclusivity and its offer looked good at $38.25/share. It was $3.2 billion in cash, some midstream equity, plus the assumption of $1.1 billion in Atlas debt and the sale of Atlas investment partnerships. But exclusivity meant the Atlas board was unable to shop for a better deal.A barrage of shareholder lawsuits has since prompted Chevron to chip in an extra $0.10/share to settle the litigation. With a subsequent jump in value for Atlas pipeline units, the deal is now worth more than $43/share for Atlas.
So what could happen now?
One endgame has Reliance selling its Atlas JV stake to Chevron. Another sees Reliance just pulling out of the Atlas JV or amending it. Then again, Van de Vijver’s letter hints Reliance could make its own bid for Atlas to rival Chevron’s, “enhancing the interests of the various Atlas Energy constituencies.” After the January 10 letter was disclosed in a securities filing last week, Atlas shares jumped to almost $50 when it was revealed Reliance had hired its own investment bankers (Perella Weinberg Partners) and lawyers (Kirkland & Ellis). But no counter offer has yet emerged from Reliance and Atlas stock has ebbed to about $45. That is still slightly above Chevron’s offer, giving some hope to Atlas shareholders and arbitragers for a better deal.
Posted by Rupesh Govindan at 6:43 PM