DNO adds RAK’s MENA assets to its portfolio. Looks to expand in Norway and Tunisia

DNO- Going in for additional listing
DNO’s board of directors has confirmed the intention to list the enlarged company on the London Stock Exchange in addition to the Oslo listing. A listing in London is expected to contribute to extended coverage of the company’s shares, attract interest from a broader range of MENA focused investors and provide a solid platform for follow on merger and acquisition activity. It is expected that, on transaction closing, RAK Petroleum will hold a total ownership interest in DNO of approximately 40%. RAK Petroleum currently holds a 30% share in DNO. 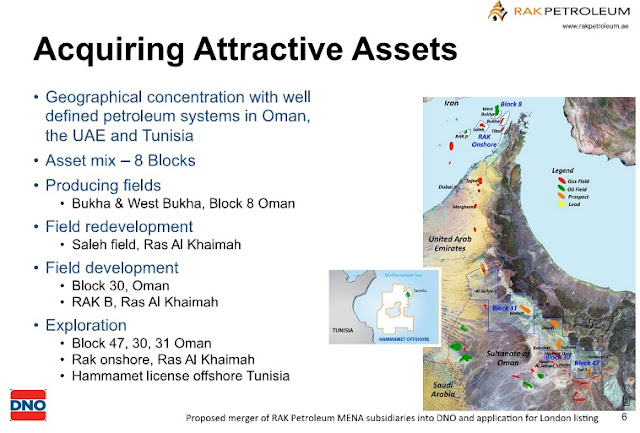 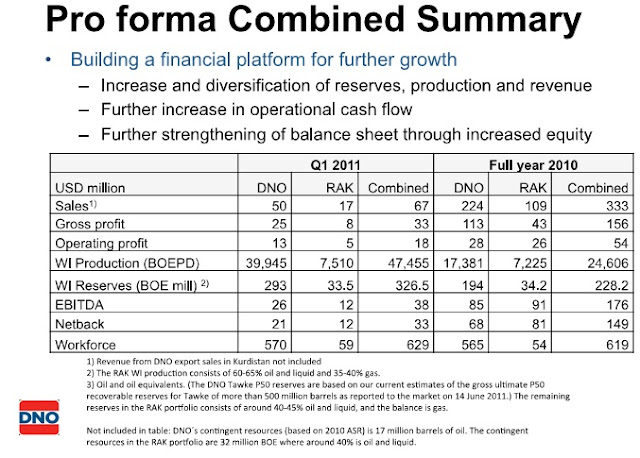 DNO looking for new options
This acquisition is in line with DNO's 2011 strategy of acquiring assets in MENA area and form atleast one new core area of operations.
The Chairman of DNO, Mr Mossavar-Rahmani, said “DNO plans to refocus itself as a Middle East exploration and production company, shutting down its business in Mozambique and unloading assets in Equatorial Guinea”. It is now evaluating expansions into its home base of Norway, and in Tunisia, where RAK Petroleum holds a 30% interest in an offshore licence.
Mr Mossavar also said, “A number of oil companies had called him "to consider combining" as political turmoil sweeps the Middle East and pushes down share prices. There may be an opportunity for a company like DNO in its enlarged form to take the lead in aggregating other MENA focused companies whose share prices have been hit by the perception of increased risk”.
Source Documents:
DNO-RAK Petroleum merger ppt

View more documents from derrick_anitha
Posted by 1Derrick at 5:07 PM