Hess Corporation Announces Capital and Exploratory Budget of US$ 5.6 billion for 2011; More than 35 percent are devoted to Unconventional Oil projects

Production expenditures of approximately US$ 3.1 billion include: 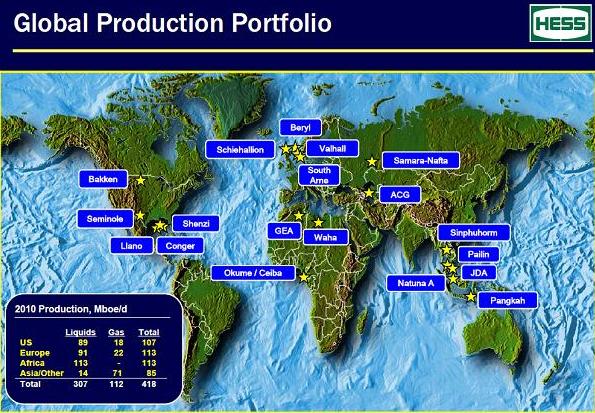 Field development expenditures of US$ 1.6 billion include:
- Expansion of the Tioga Gas Plant and construction of a crude oil rail loading and storage facility to support the development of the Bakken oil shale in North Dakota
- Field redevelopment work at Valhall to increase production capacity and extend field life by 40 years is expected to be completed during 2011
- Pony (Hess 100 percent - operator) and Tubular Bells (Hess 40 percent - operator) in the deepwater Gulf of Mexico, where engineering and design work is progressing
Try our free document search tool
Exploration expenditures are budgeted at US$ 900 million, including:
- Conventional deepwater drilling in Egypt, Ghana, Indonesia and Brunei
- Unconventional onshore drilling in the Eagle Ford Basin in Texas and the Paris Basin in France