Petrobras, Brazil's largest company, came out with its 2011 -2015 business plan last week. For the first time, Petrobras said in its business plan, it is looking to divest $13.6 billion worth of assets over the 2011 - 2015 period.

Reuters quoted its chief executive, Jose Sergio Gabrielli,  as having said on Monday, that as part of its divestment plan, Petrobras will look at selling stakes in some of its offshore oil blocks. Also, the company would sell stakes in some of its oil exploration and production projects, and partners in those projects would also be allowed to buy stakes. However, sale of its production assets would reportedly not involve its pre-salt  blocks.

Petrobras’ exploration is primarily focused in three major offshore basins in southeastern Brazil: Campos, Espirito Santo and the Santos basins. As of December 31, 2010, the company held exploration rights in 21 blocks comprising 6,374 sq km in the Campos Basin, 19 blocks (16 offshore blocks) comprising 8,086 sq km in the Espirito Santo Basin and 47 blocks comprising 29,302 sq kms in the Santos Basin. Petrobras also produces hydrocarbons and holds exploration acreage in 19 other basins in Brazil. Of these, the most significant are the shallow offshore Camamu basin and the onshore Potiguar, Reconcavo, Sergipe, Alagoas and Solimoes basins. In 2010, the company’s average daily production from its Brazilian assets was 2,165.5 MBOE/d. 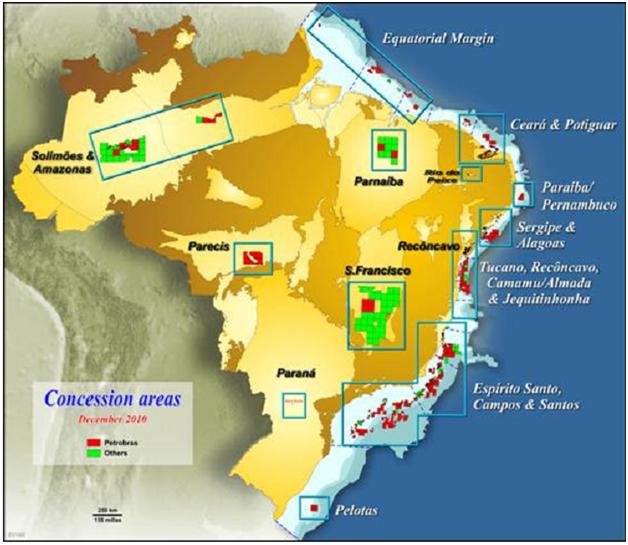 Derrick 'Deals in Play'
Derrick has aggregated all publicly announced properties for sale. Derrick’ Deals in Play is the most comprehensive data set of its kind in the industry. This special feature includes every deal ranging from the large packages being brokered through investment banks to the much smaller, non-brokered prospects. For more information click here.
Posted by Sanjay Samuel at 5:42 PM