PTTEP to invest $45 billion to boost reserves; Focus to be on S. America and Africa

PTTEP could spend $45 billion to boost petroleum reserves over the next 10 years and may consider a share issue to fund the investment.

PTTEP expects its petroleum reserves to reach 3 billion barrels of oil equivalent (boepd) by 2020. 'In the next 10 years, PTTEP will need up to $45 billion. Company is short of about $11-12 billion, may look at financial options to raise more funds.

PTTEP to focus on South America and Africa

PTTEP has petroleum reserves of just 1.1 billion boepd, Company may buy more assets overseas to boost reserves and meet the country's energy needs. PTTEP is exploring business opportunities in new areas of South America and Africa, with a view to turning the areas into the company's third business pillar, following Thailand plus Burma and Australia plus Canada. 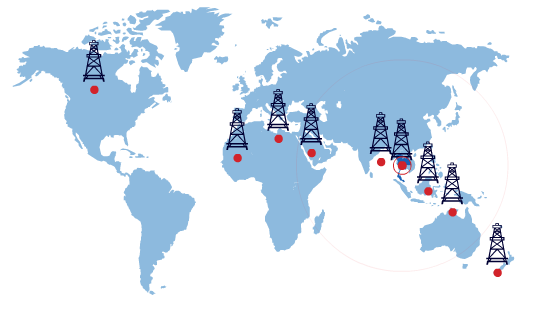 The company's success in collaborating with Norway's national oil company Statoil in the Kai Kos Dehseh (KKD) oil sands project in Canada late last year is the inspiration behind further expansion of oil and gas exploration and production overseas.

PTTEP's existing operations were now very strong and stable. Key oil and gas exploration and production in the Gulf of Thailand and Burma, comprises many fields, such as Thailand's Sirikit, Bongkot and Arthit and Burma's Yadana and Yetagun.

PTTEP is making its presence felt in Australia and Canada. Production at the Montara field off Australia is expected to resume by the end of this year, while Canada commenced production early in the year.

The company is looking to invest in other Canadian exploration and production projects with Statoil, with the two businesses having just inked an agreement to cooperate in this area.

PTTEP has set a target to have a production capacity of 900,000 barrels of oil equivalent per day [boe/d] by 2020. The production sites they have right now will produce half of the target by that year. Therefore, company would look for new projects to help us accomplish the goal.

The new projects PTTEP is seeking may be greenfield sites or existing projects. The latter type of deal is more likely to be concluded, as the company needs projects that can generate revenue immediately, Anon (President) said.

"We're looking for many deals in South American countries such as Brazil, and some in Africa. These are unfamiliar areas for PTTEP, so we have to consider everything carefully. We need partners if we want to grow in these regions, compete with existing players and learn new things in which we are not experts," he said.
Posted by Rupesh Govindan at 3:10 PM