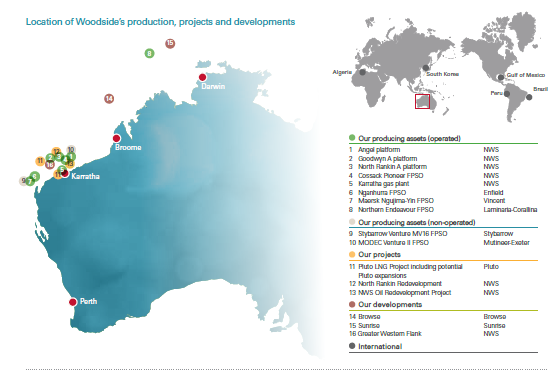 BHP Billiton Ltd. (BHP) will make a A$46 billion ($48.5 billion) bid for the Australian oil and gas producer. BHP is in talks to buy Royal Dutch Shell Plc (RDSA)’s 24 percent stake in Woodside and make a full takeover offer. BHP would swap some of Woodside’s assets, including the Sunrise natural-gas field, for Shell’s holding.

Woodside shares have risen from this year’s March 15 low to A$47.26 on April 8 on speculation of a bid from BHP and an increase in gas demand following Japan’s nuclear crisis. BHP and Tokyo-based Mitsui & Co. and Mitsubishi Corp. may be potential buyers of Shell’s stake or of the entire company, Credit Suisse Group AG said in an April 7 report.

“If BHP buy the whole of Woodside and bolt it together with their own assets, I think they could look to make $3 or $4 billion worth of synergies out of this deal.

Woodside to get 23% premium
A $48.6 billion bid would represent a 23 percent premium to Woodside’s value, in line with the average premium paid for oil and gas assets worldwide in deals announced in the past 12 months.
While talks on Woodside have intensified in recent weeks, BHP is concerned that securing the support of Woodside’s management may be too costly.

More than half of BHP’s assets are in Australia, where the resources industry is undergoing its biggest boom in a century as Chinese demand for coal and iron ore climbs. Company announced in February it is still considering acquisitions after completed takeovers in the mining industry reached $80.7 billion in 2010. Also BHP is left with $16 billion of cash due to surging prices for iron ore, copper and oil.

“Asian LNG prices are the highest in the world, and Australia, being in relatively close proximity to Asia, acquisition would put BHP in strong position to sell to that market.

Posted by Rupesh Govindan at 5:32 PM