ConocoPhillips increases 2011 capital budget by $2.5 billion to $16 billion!! ConocoPhillips to venture in to GoM, shale areas and Angola.

ConocoPhillips intends to target shale gas and deepwater acquisitions as part of the company's current asset management program. The company will increase planned capital spending of $13.5 billion by $2.5 billion for 2011 for favourable opportunities, the Gulf of Mexico in particular. Conoco is also looking at deep-water prospects off the coast of Angola. Shale assets are being sought in the US, Canada, eastern Europe (Poland) and China. ConocoPhillips’ chief executive Jim Mulva said, “The Company has its sights set on shale plays outside the key Marcellus and Eagle Ford regions”. 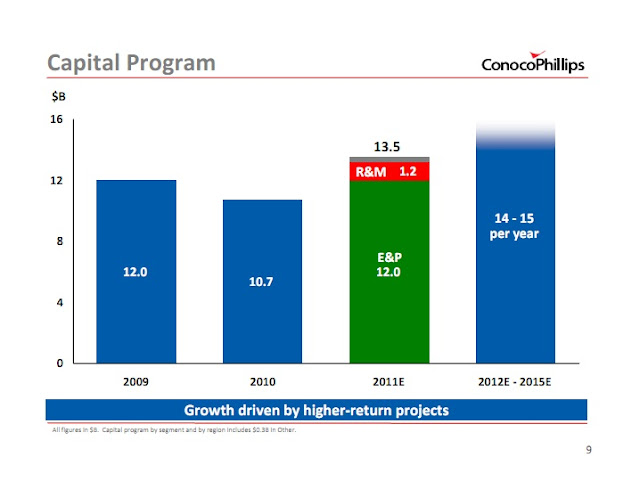 Source: Conocophillips - Howard Weil Conference- Mar 2011
Try our free document search tool
Why is ConocoPhillips on shopping spree?? May be these reasons-
Below are the significant deals in Angola:

Following are the GoM packages which may be attractive to ConocoPhillips: