Corridor Resources announced that it received notification that Apache has elected not to proceed with the second phase of the farm-out program with Corridor in respect of the potential shale gas resource development near Elgin, New Brunswick. This option is part of the following 2009 agreement- 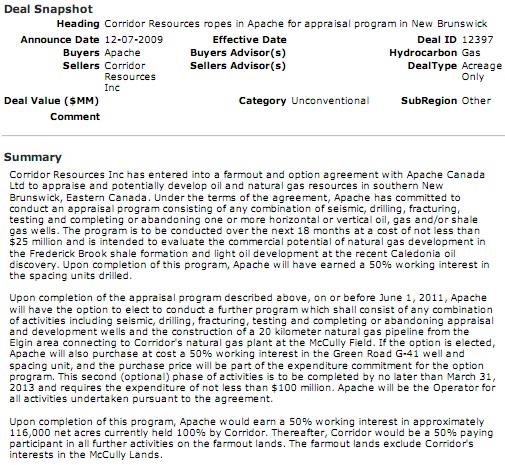 Source: Derrick Petroleum Services- E&P Transactions Database
As a result of Apache’s withdrawal, Corridor will entertain discussions with potential joint-venture partners who wish to engage in a program to develop the Frederick Brook shale and who can add value to the potential development. The information and data obtained to date from Corridor's and subsequent Apache programs will be of significant value as this program advances.


The evaluation of the Frederick Brook shale gas resources is still in its early stages, and that the best estimate of gross discovered resources is 67.3 trillion standard cubic feet (as estimated by GLJ Petroleum Consultants Ltd. in the GLJ shale resources report, effective June 1, 2009. 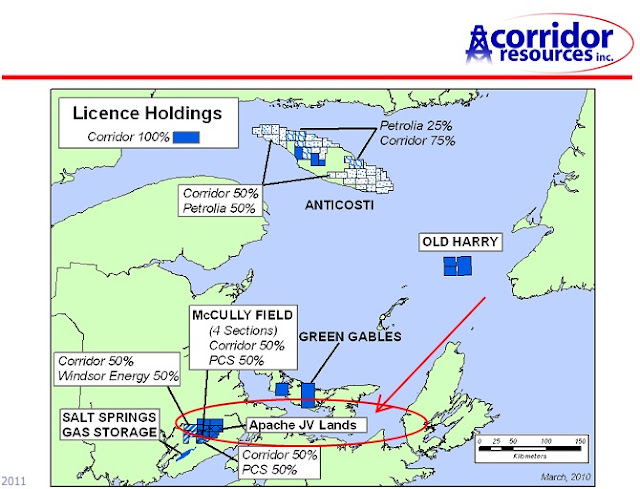 Status of work program
As was announced by Corridor on March 30, 2011, the two horizontal wells drilled and hydraulically fracture stimulated by Apache (Will DeMille G-59 and Green Road B-41), using similar large slick water techniques, have not generated sustained shale gas production to date. In May, the Will DeMille G-59 well was re-opened and flowed frac fluid at low rates with minor gas shows over 5 days. It is important to note that, when the Will DeMille G-59 well was shut-in after initial testing in early December, 2010, it had recovered only approximately 4% of the total frac fluid.

Corridor previously reported that the Green Road B-41 well had been placed on a 45 day gas lift which ended on March 16, 2011. At that time, the well was shut-in after recovering 17% of the frac fluid.  In late May, due to significant well head pressure build-up, the well was reopened and flowed gas at a maximum rate of 0.7 mmscf/d for several hours prior to frac fluids loading the well causing gas rates to decline.


Based on a consensus among third party expert consultants and Corridor technical staff, the most significant issues identified with the G-59 and B-41 well performance relate to the design of the horizontal wells in this high-stress environment and the fracture technique. Corridor believes that a different well design and frac program will lead to a commercial development of the Frederick Brook shale. It should be noted that, as previously reported, Corridor re-tested the Green Road G-41 well in December 2010, which produced gas at a constant rate of 4 mmscf/d for five days at a final flowing pressure of 1306 psi. During Q1 2011, the G-41 well was used to provide gas lift and consistently delivered the required rate of 0.5 mmscf/d during a 45 day test, at a final pressure of 2007 psi.

Corridor intends to drill two vertical appraisal wells in the Elgin area commencing late this year in order to confirm the well productivity required to proceed with a pilot phase. Based on the results of these appraisal wells, Corridor plans a staged approach to demonstrate commercial viability which would include a pilot phase with a capacity of approximately 40 mmscf/d,  targeting gas production in late 2013.  This program would include vertical wells in a multi-well pad design to take advantage of the shale thickness and the high gas saturations.  During the pilot phase, Corridor will evaluate various drilling and completion techniques. Corridor will provide further details on the Frederick Brook shale gas development plans in a corporate presentation to be placed on Corridor's website on June 6, 2011.